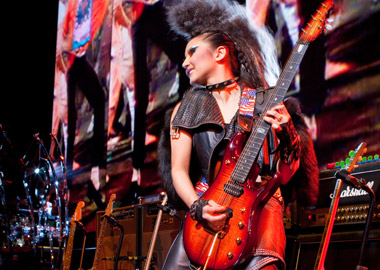 It was a steamy July evening at the MGM Grand at Foxwoods back in 2008. “Red Rocker” Sammy Hagar had just invited local guitarist Desiree Bassett on stage to unleash her much-ballyhooed fretboard fireworks to Led Zep’s “Rock ‘n’ Roll.” True to form, the then 15-year-old wunderkind did not disappoint.

“Damn,” Hagar said, upon jam’s end. “Somebody put that shit on Youtube.”

Somebody did, and to date, more than one million people have watched it.

But perhaps no viewers would have more bearing on the E.O. Smith High School graduate’s future than the small team of people who viewed it from a particular office of note in Canada.

“Sure, we still get resumes from people all the time,” Cirque Du Soleil’s Maxime Charbonneau tells the Crawler, seated across from Bassett in the Hartford Hilton lobby, “but we are definitely finding an increasing amount of our talent on Youtube, yes. I mean, you can describe what you do—how you perform—in words all day long, but there is truly nothing like seeing it. So yes, we surf around even and say, ‘Look at this guy… we’ve got to have him.'”

At the time, the Cirque casting team was on the lookout for members for its Michael Jackson: Immortal production. And when they happened upon a few Bassett uploads, they knew they had filled their six-string void.

“I remember my father took the phone call, and he sat me down and said, ‘Desiree, you have just been presented an amazing opportunity,'” Bassett says.

Her father—now manager—Daniel and mother Myrna were instrumental in her musical mastery of… well, instruments. They bought her her first guitar, a half-sized Lotus, at the age of 2, and a full-scale Ibanez Roadstar by 5.

“My father played, too, so we would play together and he would show me things back then,” Bassett recalls with a smile. “I think it was around age 8 when I entered this talent show and taught myself to play Joe Satriani’s ‘Always With You, Always With Me,’ that he knew this was more than a hobby for me.”

Bassett would go on to not only meet her idol Joe Satriani, but share stages with members of Living Colour, The Allman Brothers Band and Aerosmith, to name a choice few. For now though, she says she is both enjoying and learning from her current Cirque experience.

“Of course, production is amazing and everything has to go off like clockwork,” she says. “But still, the music team did allow a few little pockets in the program where I can be Desiree and work my own solos.”

Cirque Du Soleil’s Michael Jackson: Immortal tour comes to the XL Center (xlcenter.com) in Hartford on May 3. On Saturday, June 2, she utilizes the occasion of a Cirque night off to play a Somers, Conn. show at Joanna’s Cafe with her own band, Desiree & The Time Machine.

For more information on the latter, kindly point your browser to dbassett.com.

In other news, some potential Browne-y points for those seeking exceptional Mother’s and Father’s Day gifts.

While the concert itself will not occur until Aug. 1, tickets for Rock and Roll Hall of Famer Jackson Browne‘s 2012 Acoustic Tour stop at Mountain Park (iheg.com) in Holyoke go on sale this Friday, May 4.

Singer/songwriter/fiddler Sara Watkins gets the opening nod for this one, and how’s this for degrees of separation? The producer of Watkins’ upcoming solo effort, Blake Mills, performs at Mountain Park himself June 23 in support of Fiona Apple.

Kevin Bacon, eat your heart out.?