The boarders love blueberries. We pick a bundle every year at Birdhaven Blueberry farm. That hardly satisfies the yearly need.

My parents have wild blueberries that my mother collects by the jug-full each August when she’s not busy worrying. We eat these in pancakes when we visit. My parents are devotees of the wild blueberry: smaller and tastier. Or at least that’s what people say. To satisfy the nearly bottomless stomachs of our boarders I decided to plant a few blueberry bushes. So far, I’ve put in ten.

They can be a little finicky: they like acidic soil and they don’t have particularly deep roots. They get iron deficiency when the pH isn’t low enough (low = more acidic). I’ve never really harvested very many blueberries because of two types of interfering organisms. Keeping them well mulched takes care of the water and weeds. Usually our soil is acidic enough.

Birds like blueberries as much as the boarders and check back even more frequently. As a result we seldom get a blue berry (lots of green ones though). The youngest of our boarders is also perfectly content to eat mostly green berries. This denies the birds as well as the rest of us. I’m guessing it might also cause things to move through him a little more quickly.

In any case, I was spending some time monitoring my berries this weekend: checking to see the leaves are coming in nicely, looking for signs of nutrient deficiency, deciding whether I’d done a good job pruning, inspecting the mulch, and monitoring fruit set. I noticed the flowers had small holes at the base of their corolas, roughly where the nectar would be located. Ants were heading in and out of these holes, but didn’t appear to be making them.

So I waited to see who might be causing the problem.

Then I saw her. She was yellow and black, but didn’t have a hairy thorax, like most. I tried to get a picture but she was moving too fast. Luckily wikimedia commons already had a picture: 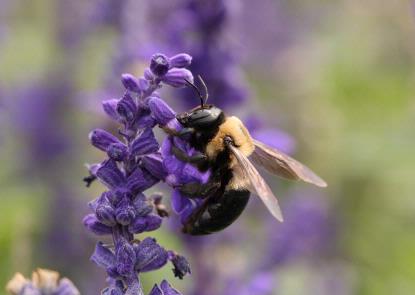 Look at her! She’s stealing nectar from the flower. Flowers and their pollinators co-evolve so that the pollinator gets a little nectar and a little pollen (for protein don’t you know?) but then spreads the pollen so that the flowers can make more plants. Simple. What’s the problem here?

Well the problem is that carpenter bees have great mandibles for digging out holes in wood (really shouldn’t be carpenter bees, more like drill bees or borer bees as they’re called someplaces). But they have relatively short glossa, or tongues. In a flower with a longish corolla, they just dig a hole and steal the nectar — outwitting the flower. Not that the flower has any wits.

Once this happens, other bees and ants will start to crawl in the hole, thus avoiding the pollen

One might expect this to cut down on fruit set — no pollen movement, no flower hanky-panky, no fruit. Oddly this isn’t the case, the plants still set similar amounts of fruit.

So does just enough pollen get stuck on the bee’s head? Do other pollinators wind up making up the difference? In the several articles I consulted, I couldn’t find an answer. Yet I see it in my own yard — the fruit is maturing. I suspect magic: bee magic.