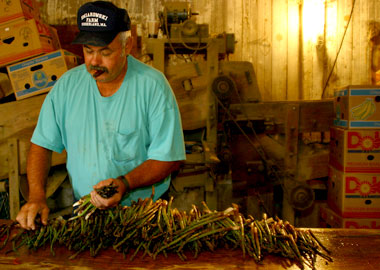 Tidy bundles of sweet, juicy asparagus shoots: they’re what many Valley residents wait for all winter—tender, steamed spears that kick off the bountiful season of local produce in the region. Sometimes referred to as “grass,” the spring crop is a product of the fertile soil that lines the wide river in our region, known to some as the Nile of Massachusetts: the Connecticut.

The spring vegetable began taking over farmland in Hadley and surrounding towns in the 1920s. With a boom of Polish farmers, families in the area began producing potatoes, onions, tobacco and asparagus in large amounts. By the 1940s, the town of Hadley was known as the “Asparagus Capital of the World,” exporting a huge number of green bundles to Boston markets and further afield. In a Gazette article from 1953, a local reporter surmised that 80 percent of the asparagus grown in Massachusetts came from the region.

After a fungus devastated the majority of the asparagus plants in the 1970s, many farmers stopped growing the crop. Today the amount of “grass” grown is but a small sliver of the historical bounty the region once produced. Still, there are roughly 200 acres dedicated to the pointy plant. The simple, singular spikes stab up through the dirt and are harvested soon after. Once the stalks become tough, the plants grow into tall, wispy “trees” that fill the region’s fields and catch the lazy summer breezes.

Charles Smiarowski’s father purchased farmland in Sunderland in 1959. He remembers his childhood as part of a farm family: “We used to get up at 4:30 in the morning to pick asparagus, then went to school. We had to pick early, so we could do the rest of the chores.” Like the school breaks for the potato harvest in northern Maine—or mud season “vacations” in many parts of New England—the region’s school schedule was flexible during asparagus season since so many families were involved with the harvest.

After 53 years of farming, Smiarowski and his wife Karen run one of the longest growing asparagus farms in the area. In 1990, after years of duty as police chief in Sunderland, Smiarowski left his post to run the farm full-time.

The Sunderland couple dedicates nine of their 30 acres to asparagus, which they sell at stores and farmers’ markets as well as their farm stand and creamery on River Road (Route 47) in Sunderland.

Smiarowski works alongside the farm crew collecting the sturdy stalks in wooden bunching boxes, then wrapping them in red rubber bands and boxing them up for market. He says asparagus still fills a niche in the farmer’s year and gives the business an influx of cash at the beginning of the season. “It doesn’t take a lot of work, it comes up early, and it produces before anything else. It’s a unique crop.”