Straight Out of Agawam 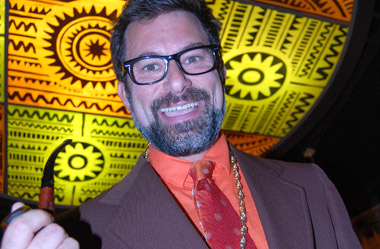 See Doc Westchesterson’s video “The 413,” and chances are, you’ll quickly develop a soft spot for the professorial rapper. He’s decked out in a stunning brown polyester suit and orange accessories, and he’s got a beard of particularly collegiate quality. Said beard conspires with square glasses and a pipe to create a highly unusual personage, a rapping academic, or perhaps a particularly learned MC.

The video, just one in a string of videos from the good doctor, sent him on a meteoric ride to Valley fame. A few weeks ago, you’d have been hard-pressed to miss the many stories of Dr. Westchesterson in local media outlets. His newfound fame even brought communication from a Family Guy producer.

Most, maybe even all, reported the facts of Westchesterson’s newfound glory, but failed to ask a vital question: why the Doctor? Why did so many of us in the 413 instantly resonate with this rogue-ish librarian of a rapper?

The easy answer may be the cleverness of his rhymes and the smooth suavity of his delivery: “Chez Josef for my senior prom/ ’cause I come straight out of Agawam.”

Another easy answer is at hand: Westchesterson glories in the commonplace joys of his life in the lower Valley, an area that too seldom gets its due in rap videos. He visits, in quick succession, many a well-known local landmark and chows down at plenty of beloved eateries, including spots like Pajer’s and White Hut.

When, recently, we sat down to lunch with the doctor at Hu Ke Lau, which features prominently in his video, that gustatory part of the equation was clear. Say what you will about the Doctor’s academic achievements and monstrous intellect, the man can eat. He took his pipe out of his mouth and laid waste to a pu-pu platter so fast it was hard to actually see the chewing take place.

He offered, in passing, a dead-on opinion, saying “The batter to chicken ratio is… just perfect.”

It was obvious we were in the presence of a rapper of scrupulous taste and great critical abilities.

But there is clearly more to this man of mystery. And perhaps that mystery is another key to Westchesterson’s success: who, in the end, is he? Theories abound, and the Doctor’s explanations clear up some matters while leaving others as murky as ever.

He shared more of his thoughts between slurps of Scorpion Bowl and bites of fried matter. Which, if any of them, are true is hard to determine.

“I grew up in Agawam,” he says. “I had liberal parents, and at 13 I got a job picking tobacco in Connecticut. That’s where I met a lot of Jamaicans.”

That early experience led him to a lifelong love of plants. “I started growing pot at 15. It took me a while to get the strains right, but then I took a bag to the prom and I sold out. That was the start of bling and the hip-hop life.”

That life was, apparently, congruous with his rigorous academic pursuits. “I was home-schooled as well,” says Westchesterson. “Then I went to Amherst College, then I moved to Oregon to attend medical school.”

After he obtained his medical license in that state, things went wrong for the doctor. He was in the habit of prescribing medical marijuana for his patients.

“You look a little tense,” he says. “You need a prescription?”

But not all in Oregon looked upon his activities with kindness. “I was stopped for a routine traffic stop,” he explains. “I had 20 pounds [of marijuana] in the car.”

After posting what one imagines must have been a considerable bail, Westchesterson skipped his bail and returned to the East Coast, where he’s spent a long time living, as he calls it, “underground.”

“I float around New England,” he explains. “I have a number of safe houses.”

His newfound notoriety hasn’t been without its perils: “Hip-hop has been a longtime passion,” says Westchesterson, “but now I’m back in the public eye, I’m afraid the cops will catch on.”

Perhaps the most curious aspect of Westchesterson ‘s popularity is that he’s been making videos for two years, but none of them, not even the one in which he holds court at Bishop’s Lounge in an outfit rivaled only by that of Ali G, caught on. (“The 413,” on the other hand, began its stunning run quickly, racking up thousands of views within just a couple of hours.)

“I did one [earlier] called ‘Shakedown Babylon,'” he says, “and a guy named Chris Conway at Killer Minnow Productions saw it and wanted to produce more.”

That led to more videos, all of which are still available on Youtube. He connected with a friend named Trevor Holden to produce “The 413.”

That video has led Westchesterson to make new plans, most of which combine his love of relaxing with his pursuit of hip-hop: “This summer, I plan to spend time writing songs, going to the beach, and trying to meet women.” Come fall, he plans to visit “only the finest venues in Western Mass.” on a Valley-only tour.

And yes, he does plan to do a follow-up to “The 413.” That’s dangerous territory, in some ways. “People have been mad at me about not doing their favorite place,” says Westchesterson.

On the other hand, he says, he got a message from someone who said they hadn’t ever been proud to be from Western Mass., at least not until they saw this video.

Absence, apparently, made the doctor’s heart grow fonder. “People live here and pass [the places in the video] every day,” he says. “To them it’s no big deal. But I come back and I can’t wait to go to Pajer’s, or to turn on Rock 102 and hear that same Bob Seger song.”

Maybe it’s statements like that that have ignited such passion for Westchesterson. He is in many ways a perfect spokesman for the 413. His academic air might at first seem to clash with the enormous gold chain that graces his orange dress shirt, but in the end, what could be a more eloquent example of the whole broad scope of the 413, from ivied old colleges to grimy neighborhood stores?

In a lot of ways, the northern Valley seems disconnected from Springfield and Holyoke, but Doc Westchesterson, in one clever bit of rhyming, happily embraces and embodies the whole of the Valley, a rare trick.

Or, as he puts it in a moment of pure wisdom, “Yeah, like a puffed-up rooster/ this is how I kick it when I’m west of Worcester.”

For now, Westchesterson has two main concerns: the first is selling the T-shirts he maxed out his credit card to pay for. “It’s villageproduce.com,” he says, a touch chagrined. “If you could let people know.”

His other big problem may be the one that only amassing fortune with his fame can solve: “It’s really tough finding matching brown polyester.”

It turns out that the fallout from Westchesterson’s life of crime had the potential to damage at least one innocent bystander. An early newspaper report on ‘413’ noted, with a sense of certainty, that the doctor bore a striking resemblance to another Agawam native Westchesterson had known in high school, a guy named Marc Scortino. In the article, the Doctor, for reasons only he may truly understand, even claimed that Scortino and Westchesterson were the same person.

The Advocate investigated these claims, and the photographic evidence is clear: “I’m far better looking than Marc,” says the Doctor.

Scortino, for his part, was initially quite angry at his unwanted association with Westchesterson. “My recent reconnection with Dr. Westchesterson was at first tense and problematic,” Scortino says in a written statement. “I mean, when some guy you haven’t seen since high school starts telling people that he’s you in an attempt to cover up his shady past, it’s going to make you pretty angry.”

Things ended with a new business association. “There was a lot of screaming and quite honestly, I considered calling my lawyer and suing the pants off the guy,” Scortino says. “But I have to hand it to him— after about 15 minutes he’d not only apologized profusely and explained his unique situation, but he’d actually turned me into a fan. As luck would have it, I’m in the entertainment business already, and the Doctor was looking for representation. I’ve been working with bands and artists for years now, so it was sort of a no-brainer in choosing to take the Doctor on as a client.”

Scortino, who owns a Block Island bar, has taken the Doctor under his wing, and if island visitors manage to see them working at the same time, it ought to finally lay to rest any remaining rumors that the two are the same.

“All in all, [Doctor Westchesterson is] a good-natured guy, even though his head has become a bit swollen with the recent success of his ‘413’ music video,” Scortino adds. “It’s been good bringing him out to Block Island for the summer so I can keep an eye on him. I’ve given him a job bartending at my nightclub, too, so that should keep him occupied and out of trouble. Hopefully.

“As far as any similarities between us physically— I just don’t see it.”