On the Clemente Course and Breathing Room

“What are the top ten actions that Congress, state governments, universities, foundations, educators, individual benefactors, and others should take now to maintain national excellence in humanities and social scientific scholarship and education, and to achieve long-term national goals for our intellectual and economic well-being; for a stronger, more vibrant civil society; and for the success of cultural diplomacy in the 21st century?”

That is the question posed by a bipartisan group of Congressional leaders and the basis for a Commission on Humanities and the Social Sciences formed by the American Academy of Arts and Sciences in Cambridge.

It’s a big question. Ambitious. And a topic, frankly, that I was surprised that political leaders were addressing.

I only heard of this commission when I was invited to talk to some of the commissioners at a Northeastern regional forum this July. Among the commissioners in attendance were former Governor Phil Bredesen of Tennessee and former Supreme Court Justice David Souter. Leaders of New England state humanities councils were also in attendance, as well as Massachusetts Education Secretary Paul Reville. A summary of the meeting can be found on the Providence Journal website here (but please note the corrections in the first comment).

The commissioners seemed to feel that a good argument for supporting the humanities in the United States is the fact that the Chinese government has been investing in educating their population with the classics (both eastern and western). Personally, I feel that while this might be an effective argument for competitive politicians, it should not be the ultimate argument for the humanities.

“Because the Chinese do it” is a popular refrain, but it a) concedes a superiority and leadership to the Chinese government, b) assumes China is a complete success, and c) is essentially circular since the Chinese establishment wants nothing more than to produce the creative entrepreneurs they see being produced by the American education system.

As we move into the school year, with reading and math proficiency prioritized by our testing regimens, it’s worth considering why the humanities are important. I don’t have the answer, but perhaps my musings will provoke ideas in others. If Congress is willing to have this discussion, certainly The Public Humanist is a place to let the grassroots speak!

The following is my prepared testimony, along with recorded testimony of my talk

[The full day of talks was recorded and more participants can be viewed at: http://www.amacad.org/events/CommissionForum/]

Good afternoon. My name is Jack Cheng, and I teach art history and serve as the Academic Director of the Boston site of the Clemente Course in the Humanities. I’m honored to have a chance to tell you about the Clemente Course for this commission because our program began with a reporter’s theory about poverty, and has always been meant to address the relationship between the humanities and society.

The concept of the Clemente Course came from the late journalist Earl Shorris. While researching a book on poverty, Earl interviewed a prison inmate named Viniece Walker. He asked her why she thought poor people were poor and her answer was that they lacked “the moral life of downtown,” meaning access and exposure to museums, lectures, and concerts. From this Earl extrapolated that true poverty was lack of access to the humanities.

So Earl decided to bring the humanities to underserved communities. He enlisted friends to teach a version of his own University of Chicago core curriculum: moral philosophy, art history, literature, American history and writing & critical thinking. The first course in 1995 was taught at the Roberto Clemente Family Guidance Center in New York’s East Village. 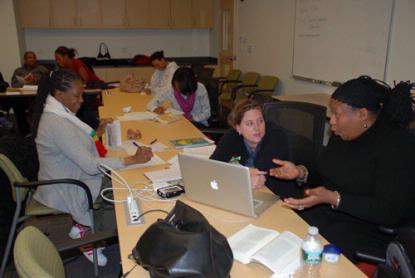 Since 2001, my colleagues and I have been teaching the Clemente Course in the Dorchester neighborhood of Boston. Versions of the course are taught at other sites in Massachusetts, in New York State and Illinois, in Washington, D.C. and Washington State, in Wisconsin and around the world. Each site teaches the course in its own way, but let me describe our class in Boston.

From October to June, 25 or so adults whose income is within 150% of the poverty line come two evenings a week to discuss Plato’s Allegory of the Cave, the influence of the Parthenon on American architecture, Shakespeare’s sonnets or the Declaration of Independence. We teach the same five subjects as Earl’s first class. Each session is a two-hour seminar, often employing the Socratic method. Students whose written work is of sufficient quality earn six college credits from Bard College.

Our classes are very diverse. We do tend to have more women than men, and in Dorchester we have more blacks than Hispanics, and more Hispanics than whites. Student ages range from 20 to 70, and many of our students are single mothers in their 30s. Almost all of them will tell you they are taking the course for at least one of the following three reasons:

1. someone at their job told them that they could not be promoted without some college education,

2. because they tell their kids that school is important and they realize they need to set an example,

3. the older ladies often say they finished raising their kids, and their kids’ kids and now it’s time to do something for themselves.

What do the students learn from the course? They tell me that:

The Humanities give our students breathing room.

So much of our day now consists of fragmented reactions to distractions– to an e-mail or text message, to the needs of our families and friends, to the avalanche of information we get through television, Twitter, and talk radio. It’s the same for my students with the added complications of rent increases or bank foreclosures on their homes, threats of deportation, unwelcome medical diagnoses. They may be eligible for food and heating oil aid, but that often requires navigating miles of red tape at state and local agencies.

But the Humanities, as I said, give us breathing room.

They are a lens through which we can reflect on our lives, not just react to life. A student this year told me that the four hours a week that she was in class were four hours that she didn’t have to think about her problems. Her problems consisted of a brain tumor and three children to take care of. During class hours she was able to find a focus and clarity that was otherwise absent in her life.

It’s easy for me to claim that the Humanities promote reflection, but my students back me up. This year I wrote an evaluation sheet after I taught the art history section because I wanted to know what works of art affected the students the most. “List three things you will take away from this semester,” I wrote.

Now that’s a pretty small sample size. However, our patrons at Mass Humanities commissioned a longitudinal study to understand the effects of the course. In a survey of more than a hundred Clemente alumni, graduates claimed to have greater engagement with their local schools, political campaigns and workplaces, and that the course helped them be more effective advocates in those arenas.

It’s easy to dismiss our students as self-selected, ambitious people who already value education. I would not argue with that. However, our steady enrollments – including a woman this year who commuted fifty miles from Worcester, twice a week, subject to the whims of bus and train schedules – point to an underserved desire for quality, high-level humanities programs in all of our communities. Earl Shorris’s insight was that economically adverse communities don’t lack the humanities for lack of interest, but for lack of access.

This commission is meant to consider how to improve humanities education. I don’t have any concrete suggestions for you, but I do have a goal for you to consider:

Talking about the Clemente Course with Yvette Layne, a student who just finished our course this spring, she

said that usually when you get together with other adults, it’s at a party or social situation but that this class was good because it gave people an opportunity to talk about meaningful subjects in depth; and there was a knowledgeable person who could help guide the conversation if needed.

When she said that, I knew that our year was a success. The Clemente Course gave people an opportunity to talk about meaningful subjects in depth. That’s the goal I hope you will keep in mind. There are intellectually curious people in every strata of our society. They do not need someone with a PhD to tell them what to think, they just need a way to find one another, find a common topic to discuss, and through their discussion, they will educate one another, and enrich one another’s lives.

The Clemente Course is one model of how the Humanities can be introduced to students beyond the college-educated middle class, and I hope I’ve given you a sense of how much our constituency values the Humanities.

Thank you for your time.