StageStruck: On the Spectrum 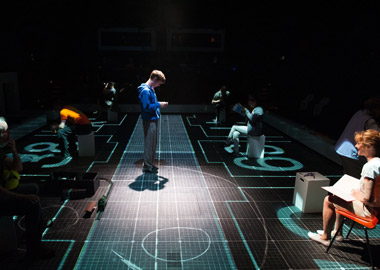 Three years ago, Britain’s National Theatre launched an ambitious experiment: high-definition satellite broadcasts of live performances beamed from its home on London’s South Bank to movie screens around the world. One of these was the Amherst Cinema, and Pothole Pictures in Shelburne Falls soon joined the queue.

The multi-camera HD capture technology puts the cinema patron essentially in the front row of the theater. Long shots are intercut with closeups to approximate the shifts of attention one gives to an in-person performance. It’s a cinema event, to be sure, but one that, for this theatergoer anyway, comes gratifyingly close to being there (and for a fraction of the London ticket price, not to mention the airfare).

Now comes the opening production in the fourth NT Live season, which brings an added perspective to the stage-to-screen experience. It’s The Curious Incident of the Dog in the Night-Time, a daring stage version of Mark Haddon’s extraordinary best-seller, staged in the round in the National’s intimate Cottesloe Theatre and starring the extraordinary Luke Treadaway.

The novel is narrated by Christopher, a 15-year-old who’s on the autistic spectrum (the assumption is Asperger’s syndrome). Highly intelligent but lost like Alice in a baffling, intimidating world, he’s a math prodigy with a photographic memory, a cargo of obsessions and phobias, and a literal interface with the world that makes him unable to decipher social cues. What begins with the boy’s Sherlockian mission to solve the murder of a neighborhood dog leads to an epic quest through terrifying dangers. His journey to London, an ordinary train ride for most of us, becomes a truly heroic act of courage, determination and endurance.

Translating the novel’s first-person viewpoint to the stage brings in multiple points of view: the boy’s mother, father, teachers, neighbors and the myriad intimidating strangers he encounters on his journey. Playwright Simon Stephens has done a bit of metatheatre, putting the narrative in the mouth of Christopher’s special-ed teacher as she reads his account and turns it into a play: the play we’re now watching.

But the director and designers manage to also keep us inside the boy’s head. The floor of the bare stage is seeded with a complex grid of LEDs which trace the geometric patterns of Christopher’s consciousness, from the layout of houses on his street to the algebraic equations in his head. The digital designs, along with intricate ensemble movement sequences, are captured by a camera high above the stage—the view from the Cottesloe balcony. With this innovation, each cinemagoer gets not just the best seat in the house, but all the best seats in the house.

As stage technology grows ever more sophisticated, it can sometimes overwhelm the live drama (think Spiderman). But it can also enhance the experience for both the on-site audience and those watching from afar. The spectrum of theatrical conventions and new technologies marshaled for this show here combine uniquely and exhilaratingly to bridge the divide between page and stage and between stage and screen.

P.S.: On the night of the live capture, most of the Cottesloe audience stayed in the their seats after the curtain call. You should, too.