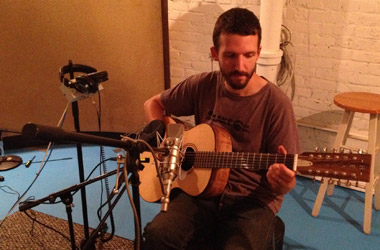 Just by walking through the door at Sonelab recording studio and rehearsal space in Easthampton, a visitor has already won half the battle.

Tucked inside the former Yankee Plastics Building on Pleasant Street, Sonelab isn’t a particularly easy place to find. For starters, the entrance to the facility is in the rear of the building. And a lack of clear outside signage makes finding the way inside somewhat difficult.

For those lucky enough to have found the way indoors, the trip proves worth every twist and turn.

Officially opening for business last April, Sonelab (a “sone” is a unit of subjective loudness) is the brainchild of recording engineers Mark Alan Miller and Justin Pizzoferrato. Though both are longtime fixtures of the Valley music scene and responsible for recording hundreds of local artists, the two didn’t decide to join forces and go into business together until roughly two years ago. That was when, according to Miller, they both decided they needed to make a change.

“I had moved out of the house that I had in Westhampton and needed to find a place to put a new studio,” Miller says. “That was about two and a half years ago, when the decision became obvious that I was going to have to do that. So I started looking around for a space, and I found this building in February or March of two years ago. And around the same time Justin was kind of doing the same thing. So we ended up actually getting together and talking about putting our heads together, putting our businesses together, and doing something that would be a little bigger than either of us could do separately.”

Indeed, with ceilings over 20 feet high and over 3,000 total square feet of space, the sheer amount of room available at Sonelab opens up a multitude of possibilities. The main recording room alone is larger than Miller’s old Slaughterhouse studio, which was housed in a renovated barn, and also dwarfs the Bank Row Recording studio Pizzoferrato used to work at in Greenfield, as well as a smaller space he recorded in at the Eastworks building next door.

To fill the area, Miller and Pizzoferrato have set up two control rooms so each engineer can record projects separately. There are also several isolation rooms, one of which is set up to record drum sounds, as well as a room for mastering and a lounge where musicians can relax between sessions. Just down the hall, even more space has been dedicated to rehearsal rooms that local bands can reserve by the month and have access to 24 hours a day, seven days a week.

Pizzoferrato says, “There are seven [rehearsal] rooms, and all seven of them are full. We’re building two more, and those are already spoken for. It seems that we have filled a need in the Valley for monthly rehearsal spaces. Bands seem to be pretty happy to have a space where they can come 24 hours a day and play.”

Another aspect of Sonelab that has made many bands happy is the community-oriented vibe the facility promotes. With a wide variety of musicians coming and going at all hours, the opportunity for artists to mingle and share ideas is something Miller and Pizzoferrato have encouraged from day one.

“You never know who you’re going to see or run into here,” Pizzoferrato says. “But it’s always going to be someone you know, and that’s really nice.”

Miller adds, “There are times when the parking lot is really full, and it seems like everybody takes a break all at once, and all of sudden there’s a mass gathering outside with 15 or more people chatting. That’s happened a few times.”

Though it’s still a little early to predict what the future might hold for Sonelab, Miller and Pizzoferrato both appear content to watch what they’ve built grow.

“Slow, steady incremental growth,” Miller says. “There are details from the build that I feel we never quite got finished, little things. But it’s really just about keeping it going.”

Fortunately for Miller and Pizzoferrato, keeping the studio going doesn’t seem likely to be a problem. Both engineers already attest to having pretty steady workloads, and each seems excited by the work yet to come. Pizzoferrato alone has already worked with over a dozen bands at the new space, including local acts like Bunnies, Friends of Yours, Home Body and more.

“I’ve just been completely excited by every project,” he says. “There have been a lot of really great bands. But it’s also just been about digging into this new space. That’s made things really enjoyable.”?

For more information on Sonelab recording and rehearsal space in Easthampton, please visit http://www.sonelab.com/news.html and http://www.facebook.com/sonelab1.