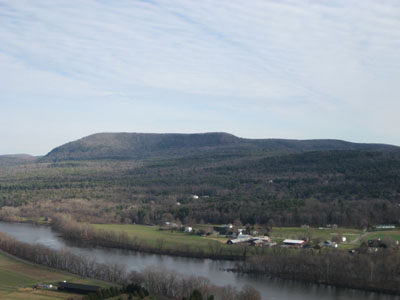 Craving a different kind of organized running experience? Then look no further than the Mount Toby Trail Run, which celebrates its silver anniversary this Sunday in our very own Pioneer Valley.

“The Mt Toby Trail Run is a true trail race classic in Western Massachusetts,” declares the run’s website. “The course is a 14 mile … out and back course over fire roads, hiking, and jeep trails.”

It’s hard. But invigorating. Like any standout trail run.

I managed to run it over two separate test runs, adding an elongated fire tower break with which to rejuvenate, and enjoy the view from the summit on my summit run. (Oddly enough, I found the run up and down the mountain more manageable than the run to and from the second half of the course.)

Soon thereafter I contated race organizer Sara Smiarowski, to get more information about the race, which, amazingly, has been a staple of the Western Mass running circuit for 25 years now.

“Trail races are more relaxed than road races,” Smiarowski explains. “Since Mt Toby is a 14 mile trail race climbing 2000 feet [total elevation gained and gained again after being lost], it attracts a much different runner than a local 5k road race. The race is a part of the Grand Tree Series — a series of trail races organized by the Western Mass Athletic Club — that features several similar trail races.”

“The course winds through the fire roads of Mt Toby over gentle hills of the Robert Frost Trail before linking up with the Summit Road which features the steady climb to the summit of Mt Toby,” continues Smiarowski. “Trail races commonly feature significant hills and technical trail section but Toby is more unique in that it is an out and back trip to the summit and return. I really enjoy the portion of the race on the Robert Frost Trail because it is run on single track. The downhill portion of the trail is fun, but is steep and somewhat technical and can keep a more cautious runners from taking full advantage of gravity on the downhill.”

“One of my favorite aspects of the Toby trail run,” Smiarowski adds, “is the hearty picnic lunch after the race where runners linger and socialize after the run. When I was new to the area and ran my first Toby race, I was quickly welcomed into the group and found several running partners that I still run with today.”

To initiate yourself into the intrepid trail running community of Western Mass, or to just enjoy a steady summit climb along dirt trails covered in peak fall foliage, head to Sunderland (see their website for directions and registration information) for the incomparable Mount Toby Trail Run this Sunday. And if you’re so historically inclined, where something silver.