Should the Iron Horse Pony Up? 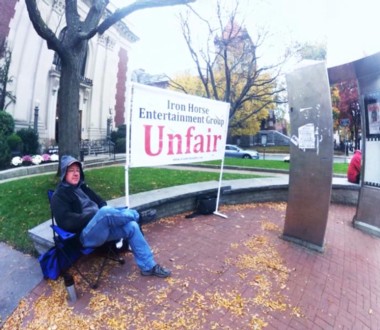 If you’ve wandered through downtown Northampton or been to ES Sports or Holyoke Country Club lately, you’ve probably seen large signs that say Iron Horse Entertainment Group (or other Eric Suher-owned businesses) Unfair. Sitting next to the signs, you’ll find employees of IHEG who are part of IATSE (the International Alliance of Theatrical Stage Employees).

IHEG stage employees unionized in the spring of 2011, and since then have been in contract negotiations. Michael Affitto, business representative for IATSE Local 53, says the negotiations “have been going on longer than any that we’ve been involved in, but it’s a first-time negotiation, so perhaps that’s the reason.”

Paul Yager, business representative for Local 232, explains, “We’re approaching a year and a half that we have been attempting to negotiate. And Mr. Suher was served with his first unfair labor practice charge for failing to negotiate in the fall of ’11. We did meet briefly in December, and we met again in May. Actually, bargaining was going very well and he stepped away from the table, and a second unfair labor charge was filed and was found to have merit [by the National Labor Relations Board]. Apparently, Oct. 11 the case was settled and Mr. Suher essentially pleaded no contest to the charge of not bargaining in good faith. We currently have a meeting scheduled.”

Employees claim that Suher’s wages for stage employees are 40 percent below the wages for other area venues. Neither the employees nor Suher have shared the exact numbers involved.

Suher, in a recent interview, expressed dislike for the very public nature of the employees’ fight. “There’s a reason they’re trying to gain sympathy and they’re trying to fight a very public battle,” says Suher. “If I ever published their wages, I don’t think people would be quite so sympathetic.”

He also claims that the venues the union uses for comparison, including the Academy of Music in Northampton, Tanglewood in Lenox, CityStage in Springfield and the Mullins Center at the University of Massachusetts-Amherst, are not in fact comparable.

“The truth is, there’s only so much money I can earmark for wages,” Suher says. “There are no comparable buildings. The Academy of Music is a public building—same with Symphony Hall and the Springfield Civic Center. Tanglewood is run by a foundation. It’s a very different situation.”

Yager counters, “It’s also my understanding that he pays his other employees below average scale, and it’s unfortunate that he depresses the economy in Northampton in that way.”

In Suher’s view, a relatively small number of IHEG employees are threatening that fairly small economic ecosystem. “The amount of traffic that we’re bringing into town speaks for itself. It allows many other businesses to do well,” says Suher. “The Calvin alone will have brought in 4,000 people this weekend.”

Yager says, “[Suher] is at an unfair advantage over other venues because of very low rates of pay, and obviously his employees are at a disadvantage.”

Though Yager explains that “Legally it cannot be part of [the banner] campaign,” the union’s website, ironhorseunfair.com, includes a “Do Not Patronize” page calling for a boycott of IHEG properties.

Despite that, both Suher and the unions, after expressing their views, seem careful to return to a similarly conciliatory note.

“There’s a reason why we’re standing the way we are with regard to these negotiations,” says Suher, “and that’s that these buildings need to stay open. The union—they’ve been our employees for many years and we hope to come to an agreement.”