The first time New England Patriots owner Robert Kraft met Tom Brady, the young quarterback was walking down the stairs of the old Foxboro Stadium, with a pizza box stuffed under his arm. Kraft interrupted the skinny rookie before he could introduce himself. “I know who you are,” he said. “You’re Tom Brady. You’re our sixth-round draft choice.” To which Brady responded by looking his boss right in the eyes, and saying, “I’m the best decision this organization ever made.” 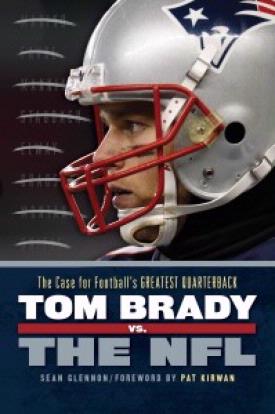 “The location of that story tends to change a bit,” local author Sean Glennon tells me, as we discuss his new book Tom Brady vs. the NFL: The Case for Football’s Greatest Quarterback. “Sometimes it’s in the parking lot, sometimes on the steps of the stadium, or just after practice.”

What makes Brady better than the Mannings, Montanas, and Starrs of football’s gridiron lore? It isn’t his GQ-good looks, his internationally-recognized supermodel wife, or his hair, says Glennon, but rather, his competitiveness, his leadership, his intelligence, and his career stats, which, year after year, are as good, if not better, than the best quarterbacks the game has ever known.

For more info on Sean Glennon and Tom Brady vs. The NFL, check out www.seanglennon.com.

And read my recent interview with Glennon: “The Greatest: Author Sean Glennon sets out to prove that Tom Brady is the greatest quarterback evern” (Valley Advocate, 12/6/12).

While you may not agree with Glennon that Brady is the greatest quarterback ever, you’re sure to agree that he is, without a doubt, wicked awesome.