Looking for the perfect connecting thread between the upcoming NFL playoffs and the recent bounty of winter snowfall here in New England? How about this Backcountry Magazine article: “Out of Pocket: How skiing kept NFL legend Drew Bledsoe grounded.” 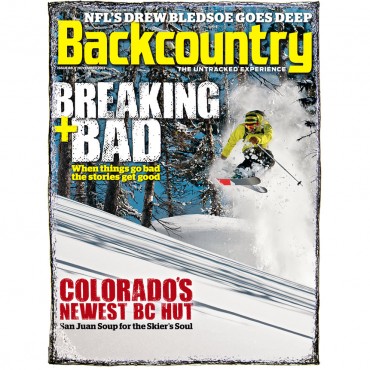 “I remember [Pats owner Robert] Kraft looked at me and nodded his head and didn’t say anything,” Bledsoe tells article author Brian Schott, of the heli-skiing trip he took with his father. “But when I signed my next contract, it had this very strict language about how much I had to pay the Patriots back if I got hurt skiing – which were big numbers.”

For the Patriots, pigskins and powder did not mix.

“So what does a young, hotshot quarterback do when he reviews the terms that the lawyers have outlined? Or when coach Bill Parcells tells him not to ski?” writes Schott (whose website provides a PDF of the piece). “He finds a Lloyds of London underwriter that will insure him for 20 ski days year with a one-of-a-kind insurance policy.

“Skiing was too much a part of his soul.”

Though he successfully managed to keep his skiing passion under the radar (by never skiing in New England) while successfully quarterbacking the Patriots through their pre-Brady/Bellichick years (which, admittedly, seem like a century ago), skiing has been a central part of Bledsoe’s life since he was two years old. A Washington native, Bledsoe grew up skiing the Cascades with his father Mac (who in turn learned the sport from Drew’s rancher grandfather). And he has maintained a secondary residence near Whitefish, Montana since signing his first big football contract. Today, Bledsoe continues to make the twelve-hour drive from his home in Bend, Oregon (in the shadow of not-too-shabby Mount Bachelor) to the Canyon Creek backcounty of western Montana.

“His attitude was that he’ll play football for a few years, but ski all his life,” Bledsoe’s father Mac says to Schott. “His attitude about skiing, and how it fit in with the rest of his life and his relationship with football, was powerful. All the powers that be – Bill Parcells in particular – wanted him to quit skiing. Drew viewed things in terms of the bigger scheme of life. Skiing in Drew’s life has been so important because it kept him grounded.”

Today, Bledsoe clicks into a pair of wooden skis that read “custom made for Drew Bledsoe,” and have an artistically rendered #11 topsheet on them.

So maybe pigskins and powder can coexist for Bledsoe after all.