An American Storyteller in Ghana, Part 2 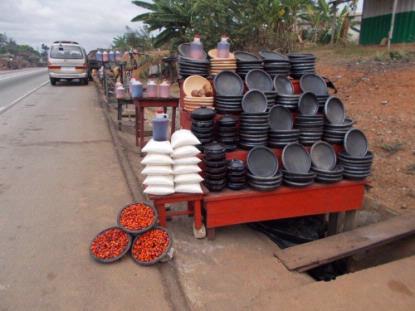 When we left Kumasi, we were already tired of traveling in our hot van, but we were still two or three days away from our next major destination of Sirigu, in the north. By the time we arrived there, we had traversed all of Ghana from south to north. Everywhere people were friendly and helpful and everywhere we saw poverty. Most people live in mud huts with thatched roofs. Some have electricity but many still get their water from a common well and use outhouses. Women spend whole days chopping and grinding food. 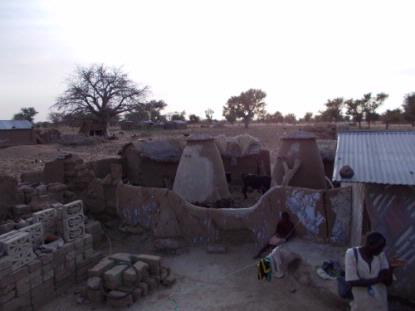 As we traveled I saw not one single store of the kind that we mean when we use that word: these stores were open to the outside with two or three wooden sides and a roof of corrugated tin or thatch. Inside was everything from toilet paper to radios to bras. Just outside women fried up food at lunch time. At the occasional “pottery village,” wooden shelves by the side of the road made a beautiful display of black, brown, and grey pots by placing them next to baskets of red palm nuts.

And then we arrived at SWOPA, Sirigu Women’s Organisation for Pottery and Art. It was 100 degrees and the Harmattan, a fierce dry wind from the Sahara desert, blew down the dusty dirt road and engulfed the small farms. In this “dry season” it was hard to imagine that anything ever grows or turns green here. Children smiled and waved at our van as we drove by. Each family has a mud wall around a compound within which there is a house with an extended family of maybe fifteen people, two granaries where seed is stored, an outhouse, and a shed for animals. In each family’s small courtyard, cheek by jowl with the people, are chickens, roosters, goats, and sheep.

Here, just across the dirt road, my travel companion, Ann, and I were shown to our accommodations in marvelously painted mud huts. Long ago most people in Sirigu painted their own houses, but now everything on the tourist side is beautiful and adorned with traditional paintings while, to me, everything on the native side seemed bleak. We were greeted with utmost friendliness and individualized programs were set up for us.

Faustina is a woman in her 30s who has made it her habit since she was a young girl to sit with the elders and listen to folktales. She can tell more than 100 stories by heart and she told me at least fifteen. She is also a wonderful singer and almost every story has a beautiful song which is sung by some character several times during the tale.

“The old lady took the orphan in and told her she could stay for three days. Then she asked the girl to make a meal. She gave her a bone, one grain of millet, and one bean.

“‘I’m sorry, grandmother, I don’t think I can make dinner with this.’

“But the girl tried her best and added some water to the pot. Soon the pot was filled with grain and chicken and beans. They sat down to their delicious meal. And the old woman was pleased.”

After passing three other tests, the orphan girl has proven to the old lady that she has a good and a kind heart. As in a story collected in “The Magic Orange Tree” by Diane Wolkstein in Haiti in the late 1970s, this girl has to sometimes disobey her host to prove that she is kind. One time she opens the door and feeds an old beggar woman after she has been told never to open the door at all. It turns out that the old lady is the beggar woman and “She is well pleased with the girl.” 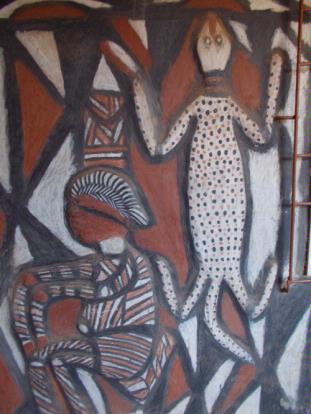 want.” The girl waves her hand over the old lady’s back. When it opens, she sees clothing and sandals and jewels. She takes only what she needs in order to enter acontest to marry the most handsome and wealthy boy in the village. She proved what a good person she is, the old rewarded her, and she marries the boy. The orphan girl lives happily ever after.

And so do I, back at home with all of these magnificent folktales. But now I have a full time job listening to the tapes, getting some of them translated, learning the songs, and deciding which stories will work for young children, and which for older children and adults.

The very best part of collecting stories is what you learn about the culture and the people who tell them. I won’t be telling the stories exactly as I heard them. I will be “making them my own” as every storyteller does. But now I understand these tales and the people who tell them and the milieu they come from in such a different way than when I was just reading them in books.

As I sing the orphan’s song I hear Faustina’s voice and picture her face. I see the dusty road and the whole landscape this story comes from. I remember things she told me about her mother and her daughter and they all go into the story.

I will never forget the people I met in Ghana and I’m hoping to share the wit, wisdom, and wonder of their folktales with many audiences here.

To learn more about Sharon Kennedy’s body of work, visit her web site at
http://sharonkennedy.com.