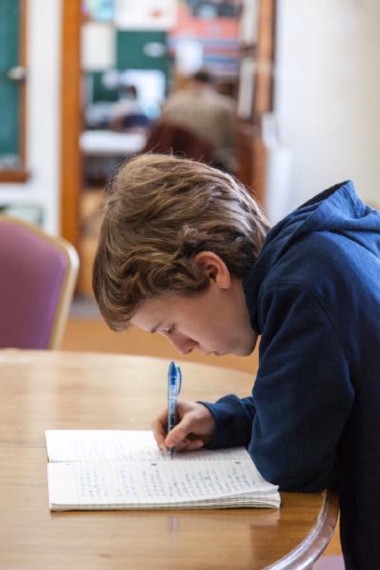 Middle-schoolers have gotten a bad rap, according to Stephen Hussey.

“Middle school has a terrible reputation, and mostly because of the way it’s been done,” he says. In elementary school, students benefit from spending the bulk of their day in one classroom, with one teacher whom they know and who knows them. Then, just as they turn the corner into adolescence, “we dump them into these enormous factory schools” where they spend their days rushing from class to class and subject to subject.

So 13 years ago Hussey, a veteran educator who’d taught at two other private schools in the Valley, founded the private Four Winds School as an alternative to the typical middle-school model. The school, on French King Highway in Gill, offers a highly individualized approach, one that both responds to students’ particular needs and calls on them to take more responsibility for their education than they would in a more traditional setting.

The American education system, Hussey says, has “gotten off target,” focusing on teaching—with the responsibility fully on the teacher—when it should emphasize learning, with the teacher enabling the student to become an independent learner, a critical thinker. A large part of the problem, he says, is the “train schedule” approach to education, based on the assumption that all kids can, and should, learn the same exact material at the same rate, and that any divergence from those prescribed milestones is a problem. That kind of arbitrary standard, Hussey says, “is so unrealistic, and it’s so stifling.” And it’s made even worse by the increasing emphasis on standardized tests and the highly structured curricula schools adopt to meet the tests’ demands, leaving little room for creativity or reflection.

Families who enroll their children at Four Winds, Hussey says, “are looking for an environment where the kids are going to be able to progress at their own rate, and they’re not going to be straitjacketed by a state-mandated curriculum.”

Four Winds is a small operation. The school, for grades six to eight, occupies two classrooms in the former Riverside School, a building it shares with the Gill Historical Society.

The kids come from across the Valley and Vermont, with students from distant communities often carpooling. At maximum enrollment, the school has 14 students; in the past few years, it’s had fewer, which Hussey attributes to the bad economy. Four Winds’ tuition is just over $10,000 a year—modest compared to the cost of other private middle schools in the Valley, which can top $25,000 or $30,000, but still daunting for many families. (The school does offer financial aid.)

On a recent morning, the students gathered in what’s called the school’s “quiet room”—furnished with couches and a piano and stocked with books, shelves of National Geographic magazines and bins of Legos— for a daily writing lesson with Eloise Michael, who splits teaching duties with Hussey. (Michael, who has a master’s in education from New York’s progressive Bank Street College, also has a son enrolled at Four Winds.)

When the writing lesson is over, they’ll move on to their core subjects—the program includes math, Latin, vocabulary and grammar—which they tackle at their own pace. The students work in two-week blocks, setting goals for what they want to accomplish in that time in each of their subjects. In the morning, they work largely independently, using carefully selected textbooks and turning to their teachers when they have questions or need help. The system, Hussey says, means the kids get individual, in-depth attention when they need it, and also helps them to understand their own learning styles and develop time-management skills.

Student work is not graded; instead, it’s returned to the kids for corrections. “In the end, it’s all right,” Hussey says, and the students learn by fixing their errors. “When it’s done, it’s done well.”

In the afternoon, there are group lessons in science and social studies, which the kids approach through in-depth, year-long themes. This year, they began their study of earth science by conducting an experiment of their own design, comparing the temperature of the Connecticut River with the temperature of the air; from there, Michael explains, they learned about the effect bodies of water have on local climates, built their own thermometers, learned to write lab reports.

In social studies, Hussey says, the themes address topics often given short shrift in school: 20th-century American history, for example, or the period between the settlement of Plymouth and the colonial era. (The latter lends itself well to local field trips; just down the road from Four Winds is the site of the Battle of Turners Falls, or the Peskeompscut massacre.) The teachers strive to make the work engaging; lessons on the industrial revolution, for instance, include a trip to the mill museums in Lowell and a role-playing game, developed by Michael, in which the kids take on the role of mill workers.

A Four Winds school day also includes a good deal of down time. Students take a mid-morning break and an hour-long lunch period that includes time to play outside when the weather’s cooperative or, when it’s not, to play games inside. The students regularly go hiking or rock climbing, and sometimes, on a nice day when they are feeling fidgety, the teachers will pile them in a car for a visit to nearby Barton Cove—“so they know there’s some grace,” Hussey says. “That’s something that’s missing in education.”

While recess is increasingly uncommon in middle schools, it’s vitally important as a time for kids to let off steam and recharge and to develop social skills. Four Winds’ small size precludes the development of cliques, Michael notes, and encourages students to work out their differences and find ways to connect with classmates. “In a large school [students] tend to find the people who look like them, or listen to the same music, or whatever it is. And then they never cross that line,” she says. At Four Winds, “they wear whatever they want. They can be silly or serious. They’re not embarrassed about doing well. … I feel like we’re sending them out at the end of middle school with social confidence.”

The school also helps kids develop academic confidence, their teachers say. For kids who are struggling academically, the program provides an opportunity to work at their own pace, shoring up their weak spots before moving on to more challenging work, rather than being pushed along before they’re confident in the fundamentals. More advanced kids can move at their own pace, too, instead of waiting for the whole group to be at the same place. And along the way, they all are given the freedom to pursue their passions; when one student wanted to take part in NaNoWriMo—National Novel Writing Month, in which participants are challenged to write a book in 30 days—she was encouraged to do so and even allowed to cut back on some of her other work that month. “ If there’s a thing a kid is absolutely possessed by, you just get out of the way,” Hussey says.

One key, Michael says, is not to compare kids to one another, but to encourage them to consider their own progress as they set their academic goals. “I’ll say to them, ‘I expect you to go a little further than you did last time,’” she says. “Kids know when it’s not their best.”

Four Winds graduates go on to a range of public and private high schools—and, their teachers say, they do so well prepared for the academic challenges they’ll face there. Indeed, they also move on with high expectations about what their education should look like; Michael tells of reconnecting with one former student who told her about sitting in a science classroom, working on a lesson about the percentages of different trees that make up a forest. “Why don’t we just go out in the woods and count them?” the girl wondered.•