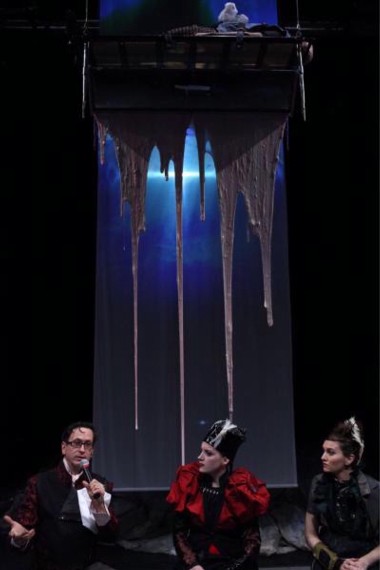 There was a coincidental unifying image in the three shows I saw the other day in Great Barrington: flowing white fabric. In one piece, a broad sheet served as tablecloth, prayer rug and other quotidian coverings; in another, a formal gown literally covered the stage; in the third, gauzy floor-to-ceiling curtains suggested a Chekhovian villa in summer.

But that’s about all these three pieces had in common. Indeed, the goal of the Berkshire Fringe is variety, and in that pursuit, the nine-year-old festival is sharing its premises this summer with an upstart organization, Mass Live Arts, which was responsible for one of this trio of productions. The Fringe runs three shows in repertory every week, while MLA presents weekend performances by cutting-edge troupes.

Mahalla is a brand-new piece from The Anthropologists, a New York-based group (led by UMass grad Melissa Moschitto) that develops work by researching the stories behind news stories and historical events. This one centers on the Egyptian city of El-Mahalla El-Kubra, a hub of the textile industry and a flashpoint of strikes and protests in the Arab Spring.

It focuses on a trio of women garment workers and, at the same time, on a young American who’s been invited to play professional basketball in Egypt (who knew?). As the hijab-clad women traverse a typical day at home and in the factory, discussing issues domestic, industrial and political, the young man discovers he’s ineligible to play because his Cairo-born father was not legally Egyptian: he’s Jewish.

The individual threads are compelling—and so were the performances—but at this work-in-progress stage the whole didn’t quite hang together. Both plot strands were left unfinished, and, surprisingly for this troupe, steeped in physical theater, the text outweighed and sometimes bogged down the onstage movement.

The Other Mozart was Wolfgang’s sister, Maria Anna, herself a musical prodigy, who was eclipsed by her younger brother’s talent and, perhaps more relevant, his gender. In Sylvia Milo’s solo portrait, we find “Nannerl” seated in the middle of an enormous white dress, its 15-foot skirts spread out on the floor—her whole world, literally circumscribed by the misfortune of being born a girl. Milo’s performance, drawn from letters and diaries, was spry and witty, turning what could have been simply a revisionist complaint into a penetrating portrait of the Mozart who might have been.

Seagull (Thinking of You), the MLA offering, came from Half Straddle, a fixture of New York’s downtown theater scene whose mission is to create “stylized frameworks that slyly deconstruct the preconceived, with a singular écriture feminine.” This deconstruction of Chekhov’s play about ambition, forlorn love and theater is a metatheatrical exercise. A group of actors is rehearsing The Seagull, but the actors keep slipping between the play’s action and their personal relationships. This results in some entertaining and sometimes illuminating juxtapositions, but also invites (some might say assumes) a rather hip, self-conscious performance style that highlighted Chekhov’s comic-ironic sensibility but (some might say intentionally) drowned the drama.

This weekend the Fringe presents a one-woman show about identity and Oreos, a “living-room rock opera,” and “a comedy about death,” and MLA showcases a “flubber-induced” metaphor of Frankenstein from Brooklyn-based Radiohole ensemble.•

Contact Chris Rohmann at StageStruck@crocker.com, and check out the StageStruck blog at valleyadvocate.com.