As I mentioned a few weeks ago, we now have a wood stove to help induce narcoleptic states in the adult human and feline residents. We used it for the first time a few weeks ago when the evening temperature hinted at a cold night. The household hangers-on gathered ‘round to impede my fire building. They drew chairs up and started swapping tales of fires past. They also spouted information, much of it wrong.

Their main experience with fire as warmth and entertainment comes from camping trips. After poking at and blowing on these fires, they knew that fires do much better when they’re given oxygen. The elder pointed out that fires also give off carbon dioxide, and in this fires are like humans but unlike plants. Things got a little fuzzy after this. The youngest asserted that the oxygen was actually turned directly into CO2. It’s an excusable lapse given the fact that he hasn’t really started in on any hard core chemistry yet, and has only a tenuous grasp on atomic theory. Kids these days.

Fires are more like humans than Isaac knows. I’ve just been discussing metabolism with my students. I show the crowd a seed and a tree and point out that the tree has gained many thousands of pounds of dry weight in the form of carbon (lignin and cellulose mostly). I ask, “where does this come from?” The most common answer is that it comes from the soil. Often even biologists will say this. The correct answer is that most of the mass comes from the air, from carbon dioxide.

Photosynthesis and respiration are essentially opposite reactions. Plants, algae, and some bacteria use light energy plus carbon dioxide and water to make sugar and oxygen. The rest of life on earth parasitizes this reaction using sugar plus oxygen to make water and carbon dioxide, in the process releasing enough energy to power our bodies. This seems reductionist, but even fats, proteins and DNA have carbon bonds derived from the sugars made in plants. We all rely on their work. Fires just release all that energy at once and let all the carbon go into the air – they oxidize the bonds rapidly that organisms slowly oxidize. In the case of wood, fungi usually break those carbon bonds – like a very slow fire. 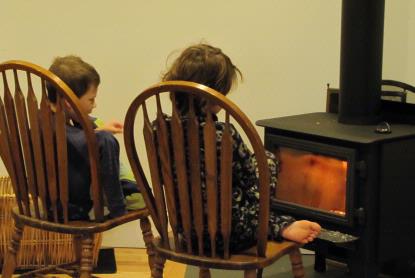 In plants there is a protein that does the job of taking a carbon from carbon dioxide and adding it to another carbon. It’s called ribulose 1,5-bisphosphate carboxylase/oxygenase. Even the pointy heads thought that was a mouthful so call it RUBISCO. Almost all life depends on this protein doing its job. What’s really stupendous is that it isn’t a very good enzyme; it’s just good enough. In the presence of too much oxygen, RUBISCO won’t even use carbon dioxide, it likes oxygen even more. Worse yet, it’s super slow, more than 10 times slower than most enzymes. Yet it does the job and a better protein hasn’t yet evolved. RUBISCO really illustrates the problem with intelligent design: virtually all life depends on a inefficient enzyme that would rather be doing something else, sounds like some people I know.