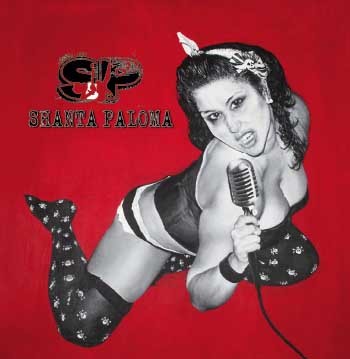 The songs on local singer and songwriter Shanta Paloma’s debut disc can be heard pretty often in the Valley these days—Paloma holds down an every-Tuesday gig at Elizur’s Pub in Holyoke. She can also be heard on Sundays at 6 p.m. on WXOJ-LP FM 103.3 (or online via ValleyFreeRadio.org), when she hosts advice show “Help Me, Shanta!”

Her self-titled disc melds several styles into an unlikely set of tunes—a harder rock aesthetic drives many tunes, with solid, straight-ahead drum parts and chunking electric guitar (much of it courtesy of longtime Valley guitarist Benjamin Jon). On those tunes, Paloma’s big voice proves quite capable of standing out in the middle of fully saturated sounds. Her tones are clear and confident, but with a gruff edge.

Other tunes offer a very different sound, inhabiting territory that owes some of its melodic turns to jazz and swing. In most of them, Paloma sings in much the same no-holds-barred manner, but “Sweet Cheeks” brings out a bouncy, girlish upper register that seems more 1925 than 2013.

Though Paloma’s vocals are more than up to the task on distorted rock tracks, the album’s best moments arrive when the tempos are slower and the instruments less up-front, allowing Paloma’s singing more breathing room and more readily revealing the contours of her melodies. Her penchant for very different musical directions makes her happily hard to predict.