At work I often sit at a desk for too many hours (more than one). Despite this lethargy, I use up food and by the afternoon I tend to get peckish. Recently I’ve been bringing salted peanuts in the shell. They really taste better than the pre-shelled ones and take a bit of work so I wind up stopping before I’m ready to vomit, usually.

This will come as little surprise to my regular reader, but I sometimes pick up bad habits. In this case, I think the shells are delicious: crunchy and salty. They’re also not particularly digestible by me. I tried this experiment once before when I was in grad school. Peanuts were a source of cheap protein and fiber. Should I just throw away the shells? I feel like they should be digestible dammit. 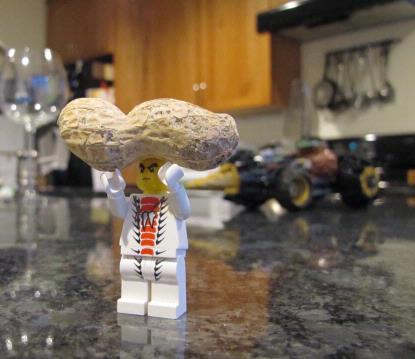 Peanut shells are loaded with cellulose and lignin. Cellulose is the polymer in cotton and paper. It’s made from glucose (a simple sugar) but the inter-sugar linkages make cellulose essentially indigestible for humans. Lignin is even harder to digest, but peanut hulls are only about 28% lignin (Guler et al Bioresource tech. 2008) – it’ll help keep you regular anyway.

Actually we’re not alone in this digestive failing, mammals can’t digest cellulose. Herbivores have to take on symbionts in the form of gut bacteria. The complicated digestive tract of ruminants houses lots of different helpers that breakdown the cellulose. The bacteria get to live in a nutrient dense environment (the cow digestive system) in turn, they pass on broken down cellulose to the cow. They also generate a fair amount of gaseous bi-product.

The cow’s anatomy is specialized to house bacteria, but several primates also subsist on cellulosic material despite an intestinal system very similar to ours (they do have a longer large intestine). They’ve just got the right bacteria to do the job.

Of course we’ve got bacteria too, many of the biochemical pathways that break down our food start with bacteria. Some evidence suggests that if we’ve got the right microorganisms in our mouth, even people with gluten intolerance could eat gluten (Helmerhorst PLoS One, 2010; Fernandez-Fio CMI, 2013).

A pile of recent studies have shown that some GI illnesses can be helped dramatically with bacterial transfer. Irritable bowel disease (Vrieze et al Best Prc. and Res. In Clin Gastro. 2013) and even seemingly intractable antibiotic resistant Clostridium difficile infections have been cured with bacterial transplants (Bakken et al Clin. Gastro. And Hepa 2011).

In a famous experiment, pointy-heads transplanted the bacteria from either fat or skinny mice into mice raised in a sterile environment (Turnbaugh et al Nature 2006). They found that the mice that got the fat mouse bacteria got fat, the ones who got the skinny bacteria, stayed thin.

So why can’t I digest cellulose very well? If I got the right bacterial transplant could I? If I did though, I’d get more calories from those shells. I’d probably make even more gas and get fat – just like cows. It’s probably not worth it.