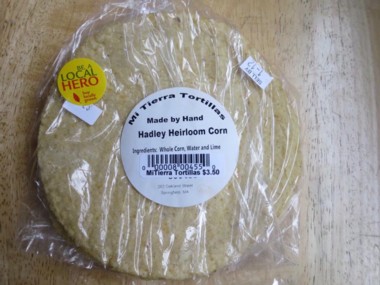 A real tortilla—a handmade, irregular, almost chewy combo of corn and water—is a thing of beauty. Now you can get the real thing at four Valley grocery stores.

When Mi Tierra Mexican restaurant and several other businesses in Hadley burned last October, many a fan of Mexican cuisine took it hard—the efforts of owner Jorge Sosa and family were the labor of years. The business grew from a small addition to a Mexican grocery to a full-blown restaurant. The Valley’s post-fire support of Mi Tierra and the other businesses has been impressive: this week, two fundraisers for Mi Tierra take place.

The rebirth of the restaurant, Sosa says, is likely to take a while. No suitable space has been found in Hadley, though a builder has expressed an interest in creating a space (in Hadley) to rent to the restaurant. Plus, Sosa says, “We have a liquor license in Hadley and can’t transfer to other towns.”

One of the most disheartening losses Sosa suffered was a $50,000 tortilla-making machine, one that Sosa went to Houston, Texas to get. He had teamed up with Hadley farmer Al Zahowski, who grew heirloom corn for the tortillas to come. In the aftermath of the fire, Sosa is still using the corn for tortillas, but he and his crew are doing it by hand.

In the business Sosa and family own in Springfield, Estelita’s Taqueria, tortilla production has begun. The process isn’t particularly hard—masa flour (corn and lime) gets mixed with water, then the flour gets rolled into balls and smushed flat in a tortilla press. The tortillas then hit a hot griddle briefly. That’s it.

This very old art may be simple, but the results are delicious. In a proper tortilla, corn takes on a smoky, savory flavor and a toothsome texture that holds its own on a plate full of fiery tastes. Mi Tierra tortillas are also a beautiful example of local sourcing and small-batch production, right down to where they are available: so far, that’s just State Street Fruit Store, Serio’s and River Valley Market in Northampton, plus Cooper’s Corner in Florence.

For me, taking Mi Tierra tortillas from the shelf quickly led to a side-by-side taste test. Once you get beyond the cardboard, vaguely corn-flavored excuses for tortillas that lurk on grocery shelves, there is but one real contender to compare with, at least when it comes to corn: La Banderita.

The test called for simplicity, so the methodology involved only a hot skillet and tortillas. Each tortilla got heated until some browning occurred, then was devoured while still steaming.

The Banderita displayed its breed’s Achilles’ Heel, sticking on one corner, even on a dry skillet. They’re unforgiving of the wrong temperature. The finished product is still miles ahead of most tortillas. The package says “ricas,” and rich is indeed a good word for their taste. Corn flavor is prominent, and a Banderita is soft and pliable. These are thin, though, and doubling up is often a good idea.

With that benchmark in mind, I flipped a Mi Tierra tortilla into the pan. It looked a lot more interesting than the previous resident. It looked like a moonscape. It was clear where it had touched the griddle before. Promising.

When it was slightly browned, I tucked in. It crunched, but the inside was soft. Not something you get with storebought, ever. The flavor was pronounced, but somehow earthier than the usual corn flavor. Maybe that’s the result of using Hadley heirloom corn. Even La Banderita can’t touch that.

Tortillas are, of course, seldom consumed unadorned. Though the Mi Tierra variety holds up well to that treatment, it calls out for something to go on top. You don’t want to waste a tortilla like this on an inferior role. In Texas, it’s common for tortillas to arrive before the meal proper, and usually with hot sauce and butter. That combo proved perfect, allowing the corn flavor to remain up-front, but complicating matters in a tasty fashion that offset the dry nature of tortillas (though handmade ones are always moister than storebought).

It’s a rare treat to find such a great convergence of foreign cuisine, local sourcing and local small-batch production. Your tastebuds will thank you for discovering the real thing, and the proceeds will help fund the return of Mi Tierra.

In the meantime, Sosa is busy. “We are partnering with Michael Docter, a local farmer, for getting a new machine,” Sosa says. “We are already talking with farmers about growing a lot of corn here in Hadley. That will help us get more tortillas to our customers, and for less money. That may happen quicker than the restaurant.”•

This week there are two Mi Tierra benefits: