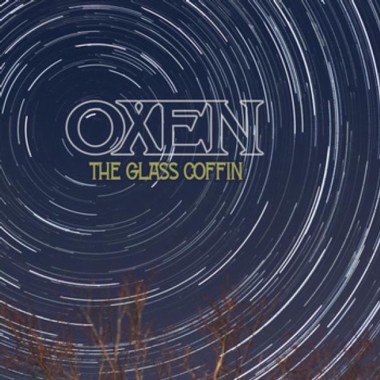 The Glass Coffin is the four-song debut EP from a “heavy transcendental” rock band out of Holyoke. Ben Reigle (guitarist/vocals) and Hans Dalhaus (drums) formed Oxen originally to “channel their influences.” They later added Chris Daniele (guitar/engineer) and Andy Barrett (bass) to become a four-piece.

I watched the official video for “Pollution” on YouTube first, before I listened to the full EP. It’s a song to listen to in the dark, with your eyes closed, with no interruptions. It’s relaxing, slower than the rest of the album but also driving, bringing to mind the band Isis. The lyrical chants at the end of the song bring on chills as the music fades into the distance for a perfect ending. The almost three-minute instrumental intro to opening track “Tomb of the Queen” is a perfect indication of where the EP is going—to my ears, it sounds like a concept album (but clearly a lot shorter).

Each member of the band lends vocals to the tracks—there isn’t a single frontman. The vocals sound distant, almost haunting, but hauntingly good, and that works for their transcendental style. The title track offers some fast-paced guitar riffs that will make parts of your body start moving along automatically. The slight distortion at the end is perfect to break you out of the musical hypnosis the song may put you in. “Key to the Kingdom” is the peak of the EP, gearing up for the final song, “Pollution.” With only four tracks to listen to, you will be left wanting to hear more from Oxen in the near future.