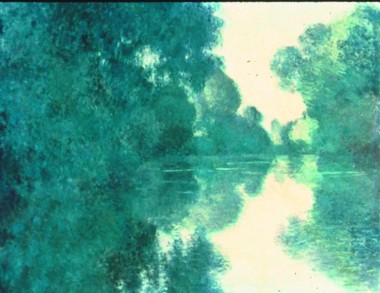 When Andrea Chinedu Nwoke thinks of Fannie Lou Hamer, her thoughts go back to her grandmother. “The things Fannie went through, the hurdles she faced, are much the same as my grandmother did,” says Nwoke, whose African-American forebears lived in a time of strict segregation and constricted opportunity. Nwoke sings the title role in Mary D. Watkins’ biographical opera Dark River: The Fannie Lou Hamer Story, which receives its East Coast premiere this weekend at Mount Holyoke College. Last week I visited a rehearsal and spoke with Nwoke, conductor Ng Tian Hui and director Darryl V. Jones.

Hamer was an influential but often overlooked leader in the civil rights and voting rights movement of the ’60s—overlooked not least because of the male dominance in the movement. She was a woman of firm principles, tireless energy, feisty spirit and deep faith—her practice of singing hymns and spirituals at demonstrations inspired the “freedom songs” that sustained the movement. Her most famous saying is invoked in the opera: “I am sick and tired of being sick and tired!”

“You have to question why someone, especially in that time, someone with limited education and limited resources, would put their lives in danger, fighting that battle,” Nwoke muses. “I think it was because she was a woman, and she had a family and children, and really truly there had to be better for them, there had to be justice.”

For Ng, too, Watkins’ opera has personal and generational resonance. He is music director of the Mount Holyoke Symphony Orchestra, which is presenting the work in association with WomenArts, the national organization founded by former Valley resident Martha Richards. Ng, a Singaporean of Chinese descent, recalls that “my grandmother lived in a little shack with paper-thin walls and a zinc roof and chickens running outside—kind of a subsistence living,” like the dirt-poor sharecroppers Fannie Lou Hamer came from.

He, too, has been on the receiving end of racial prejudice. “I’ve been in situations where people shouted at me from across the street, ‘Go home, Chink,’ and in musical situations where people told me, ‘Wow, we didn’t think you were the conductor, because you’re Chinese.’ So these themes do persist. This is a very relevant issue.”

Ng finds Mount Holyoke an ideal venue for this opera. “This is a community of women who are very interested in these social issues, and my belief is that the orchestra should engage with what is current. We’re not just wanting to play music by dead white guys all the time—nothing wrong with that, we love that music, but there needs to be a balance.” He quotes one of the lines in the opera—‘I feel hope that we can change our lives’—recalling that it was first performed in 2009, when Barack Obama became president.

Dark River, for which Watkins wrote both music and libretto, opens in Jim Crow Mississippi in 1955, with the news that sparked Fannie Lou Hamer’s lifelong quest for justice: the savage murder of 14-year-old Emmett Till, whose crime was speaking to a white woman. It flashes back to the 1920s, with young Fannie wondering why she can’t go to school like the white children, and then ahead to 1962, when she takes her first step toward freedom and dignity: daring to register to vote in her rural Mississippi town.

The semi-documentary narrative follows Hamer’s often perilous journey through intimidation and violence in the Freedom Summer voter-registration drive, to her leadership in the Mississippi Freedom Democratic Party’s challenge to seating her state’s all-white, segregationist delegation at the 1964 Democratic national convention, when she defied the party establishment that feared losing the then-solid-Democratic South. “If the Freedom Party is not seated today,” she said (and sings in Dark River), “I question America. Is this the land of the free? The home of the brave?”

“She was an unsung hero,” says Darryl Jones, who directed the opera’s 2009 production in Oakland and repeats that role here. “People who grew up during the civil rights era and people who have studied it know who Fannie Lou Hamer is, but the average person does not. Nor,” he says with a smile, “does the average person go to opera. But there aren’t many operas based on African-American heroines or heroes, and it’s a story that needed to be told. So this just seemed like a wonderful project to undertake.”

Dark River is also a rare opportunity for its largely black cast and creative team. “Finding work as an opera singer is challenging. It’s doubly challenging when you’re African-American,” says Jones, himself an African-American. “And to have a show that’s written specifically for you—this is great service work we’re all doing, providing these singers with something to sink their chops into. And then to invite the public to it, well, that’s icing on the cake.”

This weekend’s production is performed by an ensemble of 16—mostly professional singers drawn from New York and Boston, playing the dozens of roles—and a 45-piece orchestra. A full-scale opera in the grand style might seem incompatible with a subject that’s musically associated with folk and gospel themes, but Jones finds it the perfect medium for this heroic tale.

“When you shoot for excellence, you shoot for the top of your game, and in the music world, opera is the top of the game” he says. “I think Mary Watkins felt that Fannie deserved to be represented at the peak of the art form. There are touches of gospel, touches of blues, but they are only touches. For the most part you will be hearing more avant-garde rhythms, but with glorious, glorious choral work. I think that’s where Mary really shines. She has such an interesting jazz contemporary ear—she creates these chords that just wake you up.”

More than a slice of history, more than a paean to an unsung hero, Dark River is a reflection of the never-ending struggle for justice and equality, Jones says. “Fannie’s story is an American story. It’s one of overcoming insurmountable odds. Even though we have an African-American president, we still also have things like the Trayvon Martin case. There is still a journey, and this piece reminds us of that.”•

Chris Rohmann is at StageStruck@crocker.com and his StageStruck blog is at valleyadvocate.com/blogs/stagestruck.