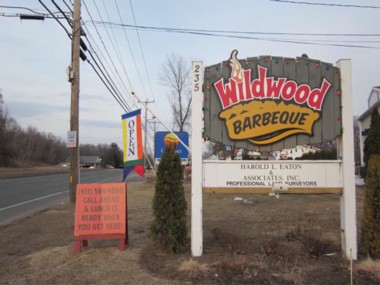 Consider yourself warned: do not attempt to satisfy your curiosity by popping into Wildwood Barbecue without getting some grub. Once the delicious scent of smoked meat settles in your nostrils, it will be near impossible to avoid succumbing to your desire for a meal of barbecue.

Like a fool, I tried it last week, telling myself I would merely stop by to take a photo or two. Leaving a few minutes later with an empty belly and some suddenly over-active taste buds, I suffered through the remainder of the night, dreaming of pulled pork and imagining myself seated at one of Wildwood’s picnic tables some summer evening with a beer in one hand and some barbecue in the other.

Glenn Brunetti opened Wildwood Barbecue in Hadley last summer, and in the intervening months his Route 9 restaurant has become one of the most popular new eating spots in the Valley. On the first Wednesday of each month (second Wednesday in April) this spring and summer, Wildwood will turn its beer taps over to an assortment of local brewers, including Element Brewing Company in May, People’s Pint in June and Lefty’s Brewing Company in August.

The Advocate contacted Brunetti to learn more about Wildwood’s first tap takeover by Smuttynose last month, and to hear about this month’s April 9 tap takeover by the granddaddy of Valley microbrews, Berkshire Brewing Company.

Valley Advocate : What’s it like running a barbecue place in the northeast?

Brunetti: It’s wonderful. Customers are often transplants from the South and are happy to get a taste of home, or they are just being introduced to slow-smoked barbecue—which is different from backyard grilled barbecue—and discovering that they love it. Either way, they are an appreciative and enthusiastic bunch.

We offer classics such as brisket, ribs, pulled pork and chicken, and do smoked salmon, chicken wings, pastrami, sausage and housemade bacon on a regular basis. We have creative weekly specials and bake our own desserts, and of course carry great beers to go along with it.

Why is barbecue so much better with beer?

I believe the combination of spice, smoke and natural flavors of the meat excite the palate, helping to enhance and define one’s enjoyment of a great brew. American beer has become much more sophisticated in recent years, and there is an almost limitless array of bold and creative beers brewed right in our region. It is inspiring to us to cook with these flavors in mind and know that our culinary efforts will taste even better when accompanied by the great beers we offer.

We take our food-beer pairings one step further, planning Tap Takeover dinner and dessert specials that include the featured beers of our guest brewer. For example, at the Smuttynose event, we had a special burger with mushrooms sauteed in Finest Kind IPA. We also had house-smoked kielbasa and homemade pierogies stuffed with potato, roasted garlic and smoked Gouda cheese, served with cabbage braised in Bouncy House pale ale. For dessert, there were chocolate malted cupcakes with a Smuttynose Porter caramel sauce.

Tell me about your March Tap Takeover event.

Smuttynose is a fun group and they brought giveaways—pint glasses, key chains and bumper stickers—as well as a nice assortment of beers. Their lineup included “standard issue” brews from their regular repertoire—Finest Kind IPA, Robust Porter, Star Island Single—and a couple of seasonal beers: Dirty Mud Season Hoppy Brown Ale and Noonan Black IPA. Perhaps the biggest treat of the evening was a batch of Bouncy House, a seasonable IPA that is still in the development stages and won’t be available to the public until May.

It was roughly twice as busy as our usual Wednesday night. Even those who came not realizing it was a beer event really got into the spirit and had a great time.

How did the Tap Takeover idea come about? And how did you decide which breweries to include?

We knew from the start that we wanted to host beer events, so we started asking distributors and local breweries for ideas. We encountered many down-to-earth and accessible folks who were eager to work with us. On a regular night, we might have a beer or two of theirs on tap, but with a takeover event, a brewery has the opportunity to offer customers a much wider selection, from the classics to the more obscure and experimental.•