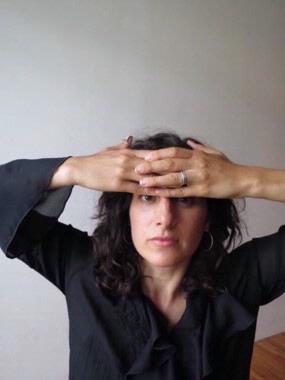 When Rythea Lee steps onto a stage, her remarkable calm is striking, even inviting. She looks right at the audience, and seems untroubled by a flock of expectant faces. She often performs in crowded living rooms, where she can look audience members in the eye, up close. Such circumstances might rattle the most seasoned of performers, but she seems at home, utterly relaxed and fearless.

All the same, Lee says, “It totally freaks me out! You have to learn to work with your fear—there’s lots of adrenaline to work with. At one show I wasn’t nervous at all, and that freaked me out. I was worried I’d be shut-down.” (It didn’t work out that way, she says.)

A few years ago, Lee offered an unusual dance piece as part of an evening of performances in a large space in Northampton’s Thornes Market. She already had the self-possessed, unflinching style that’s on display in her current one-woman show, Don’t Be A Dick. Hers was the most riveting work on the bill.

She sat in a chair, telling stories. But her stories were liable to take turns toward unrestrained movement; they were dances as much as tales.

The effect was startling and immediately engaging. It was comedy, drama and dance all at once. It’s hard to say which took precedence. That unusual performance style has culminated in Don’t Be A Dick. In the show, Lee combines original music, monologue and dance, weaving them into an autobiographical tale full of funny moments that often arrive in the middle of serious narrative. It’s a combination that began in the art form she started with, dance.

“My formal training is as a modern dancer,” she says. “I studied at NYU, and became a very serious choreographer.” After her move to the Valley in the mid-’90s, she says, “I started this practice of dancing and talking. It was spontaneous monologue. I talked about my problems and my ‘issues.’ It turned out I was funny, too. That was a very exciting surprise.”

The surprises didn’t end there: “I would be so shocked at what was coming out of my mouth that I figured I had to set what I said. I was getting really dark without prescreening.”

For Lee, the “darkness” has a clear origin—in 2008, she penned the book Trauma Into Truth about, in part, her experiences with childhood abuse. She now works as a therapist, helping others deal with similar issues.

Material like that “requires you to be totally vulnerable or it won’t work. You have to be authentically emotionally connected or it won’t read,” she says. “I’m using myself as an example through the whole show. It’s a musical memoir about my life, and I’m using my life as an example of how to be awake, conscious, alive, expressive.”

That may sound grandiose, but Lee’s ease and frank delivery make such abstract concepts feel down to earth.

For her, the arts have been something of a savior. “I’ve used the arts to heal for a long time—every art form I could get my hands on. There are still so many to learn,” she says. “I’d like to learn piano, another stringed instrument. I’d like to sculpt. It’s endless.”

That all-encompassing familiarity with the arts fuels her fluid transitions between music, dance and drama in performance—whatever part of that world she’s inhabiting seems, in the moment, to be where she’s most comfortable.

“I’ve always wanted to put all my talents into one show and then have a deeper message,” says Lee. “The essence of my show is about how people can change their own consciousness. People can reflect on themselves and change the course of their lives.”

Lee’s musical work was the spark for what became her “one show”: “I made an album [Something Knows You], and then I decided to write a monologue to go with each song. Dance came in at different times,” she says. “This whole arc of a story emerged, the essence being information about how to not be a dick.”

So why a word as provocative as “dick?”

“You’d have to see the show—it’s a very useful metaphor. But it’s not a male-bashing show. Anyone could be acting like a dick at any time. I have Q&As after my show, and usually, a big area of discussion is the title.”

Unlike her past improvisations, the show is closely scripted, though she does improvise a line here and there, something her husband, assistant writer and producer Patrick Crowley, encourages her to do. (She also works with a co-director, Melissa Redwin.)

About the push toward improv, Crowley says, “All of her work comes from improvising, so why not do some of that during the show? As always, things happen in a show—she’s had to improvise then, and some of those things have been incorporated into the script.

Redwin notes that the show, scripted though it may be, still feels improvisational. Keeping that feel, Redwin says, was an important challenge. “Rythea’s very present with those emotions she’s feeling. I’ve never really known someone who could do this kind of comedy off the cuff so consistently. Sometimes at the end of the show she’ll come up with some fresh jokes, like a stand-up routine.”

Though she’s clearly able to pull off improv, Lee voices a surprising opinion. “I really like having it set,” she says, “committing to what I wrote.”

For now, she’s also committing to longer-term performance of Don’t Be A Dick, which she’s done for a year so far. The show has grown in grassroots fashion—it started with living room performances, largely fuelled by social media. Now, Lee says, she’s also able to fill larger venues like community centers.

Living room shows in particular have allowed her to offer a vision of the arts as accessible and useful. She laments the increasing rarefication of artistic performance. “It’s now this thing you have to be good at. Not to say I’m not good at it. It’s no longer a tribal, communal outlet that everyone has access to,” says Lee. “Now you have to be good at it, and you’re gonna get judged and analyzed. You’re either heading for fame or failure. That sucks and it’s stupid.”

She’s found her experience so liberating that she has a word of advice: “I think everybody needs to write a one-person show,” she says. “If not that, a story about what matters to them. You get to ask yourself the questions, ‘What do I care about?’ and ‘What about myself do I want to express?’”•

An excerpt from Don’t Be A Dick

I like to reminisce about the time when we were planning the wedding. Many months before the event, we were picking invitations, writing vows, choosing the location, and it was flowing so well, so much synchronicity. And then about a month before the actual wedding, I just hit a wall. It began dawning on me that I was going to have to live with this person’s habits, Patrick’s habits, for the rest of my life. And suddenly, I’m like, what the fuck was I thinking? This is insane!

And he started freaking out too. He started saying things to me like, “Do you have to chew when you eat?” and “Must you breathe when you talk?” That was the best he could come up with because I’m so awesome.

The day before the wedding, I sat down and wrote this song and it changed everything. Because amidst the loud screaming fear, there was this lit path of knowing, and I had to get very quiet to see it.