CD Shorts: Erin and Her Cello 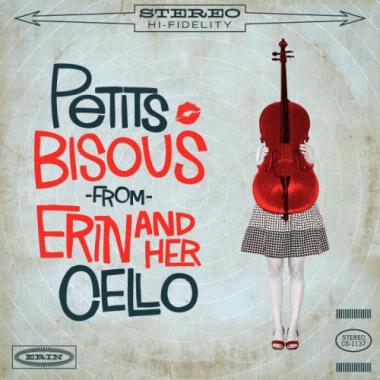 New York City-based Erin Hall proves that a bit of attitude can be a good thing. Like early Christine Lavin, Hall features urbane, quirky, and insouciant observations of life, the city, and popular culture. Lavin is a folkie, but Hall draws from girl groups, vintage French pop songs, jazz, calypso, blues, and rock and roll. Erin and Her Cello is the name of Hall’s band and she does indeed play the cello, but you’ll also hear everything from boogie-woogie piano to glockenspiel.

“2 Good 2 B True” has a Twittery name, but it is girl groups retro, complete with oooh-aaahh backup singers. “The Doctor” also has a girl group feel, but the instrumentation is ’50s style rockabilly supplemented by wailing sax. Satire tempered by charm is Hall’s metier, as she demonstrates on “Break Dancin’ Man,” a sardonic send-up of look-at-me performance. She also wields her lampoon harpoon on “Google Stock.”

Hall shuffles between styles like a Vegas dealer–as befits one whose musical inspirations include Peggy Lee, Cole Porter, and Serge Gainsborough. Each of them gets an airing. “Chaz” is soulful, cool jazz, whereas “Damn” moves to the black keys to lend a faint air of danger. If that doesn’t float your boat, there is Gainsborough-like French pop (“Bonbons Chocolat” and the call-and-whistle title track). How about some bouncy pop? Inappropriate attraction has never been so giddy as “Rebound Magnet.” Too sweet for your taste? Try the rocker “Walk of Fame.”

This release sparkles with wit, audacity, and boisterous fun. Score one for attitude.