Between the Lines: Positively Jordi Herold 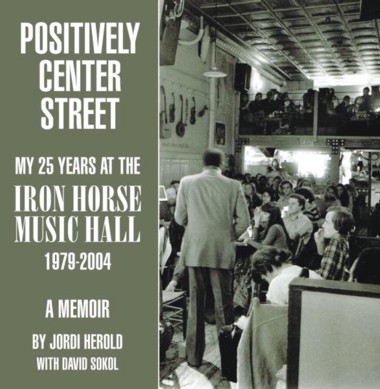 The place was jammed to capacity. The Iron Horse crowd was restless, energetic. I looked over toward the stairs coming from the basement, and a slight, messy-haired guy came up, turned the corner, and slipped through the crowd toward the stage. Beck had booked a pre-tour warm-up show at the Iron Horse, and a lucky 200 got to enjoy, up-close, music that’s not usually possible to see in a small club.

The lack of pretense had an interesting effect. This well-known player seemed, in that context, like a guy who just wrote really good songs and played them with a solid, rather quiet band. It made the evening one to remember, and changed the way I heard Beck’s album on later listens. That’s what the Iron Horse does best: offers music in a stripped-down, comfortable setting where listeners can hear subtleties they might not otherwise. The venue’s habit of featuring national acts on the rise and big names you wouldn’t expect to see in a small club in a small town makes it a centerpiece of the Valley’s cultural life.

Though he’s no longer involved in the Iron Horse Entertainment Group, the man who put the club on the map is Jordi Herold. If you want to understand Northampton’s current arts scene, its mix of culture and business, you have to know Herold.

For music fans, a visit to the Horse is usually rewarding. It’s a great place to see a show. That much can be said without fear of contradiction. That isn’t, of course, the end of the story. In part because of the venue’s prominence, and in part because of some over-sized personalities who’ve run it, the Iron Horse is also a lightning rod. There’s long been a background chatter of disgruntled musicians and detractors. Fortunately for concertgoers who are just out to enjoy music, the aspects of the Horse that provoke controversy are mostly behind-the-scenes details. Those details are the stuff of the just-published Positively Center Street, a memoir of Herold’s 25 years at the Horse.

Herold was one among many who saw in Northampton a jewel in need of polishing and brought his entrepreneurial spirit to town. Today’s Valley, with its often useful tensions between arts and business, town and gown, and that cultural divide marked by the nicknames “Hamp” and “Noho,” is largely the product of folks like Herold. His DIY aesthetic and unflinching approach to controversy have made him, like the club he founded, a big, sometimes polarizing presence. Herold started the Iron Horse in 1979, sold it in 1994, then returned to book shows when Eric Suher bought it in 1995. Herold’s tenure ended in 2004.

Running a club is a consuming challenge, and Herold brought an 85-seat music cafe from humble roots to a significant spot on national tour maps. That’s no small accomplishment. In the sprawling Positively Center Street, co-written with former Valley Advocate music editor David Sokol, Herold shares a massive trove of photos, stories and trivia from his 25-year run at the Iron Horse.

The book is an unusual, chaotic ride. It echoes the club itself: a labor of love, but a messy and no-holds-barred labor of love. It’s a mish-mash of remembrances, and is better dipped into randomly than read cover-to-cover. Happily, the book bears Herold’s hallmark straightforwardness. When, some years ago, I asked Herold about band payment policies that had wrankled some local musicians, he said, with a smile, that musicians ought to deliver a crowd or go away.

In Positively Center Street, Herold writes in the same bold way. It makes the book a fun (and enlightening) read.

Early on, he discusses how he paid saxophonist Hassan Dawkins, about whom he says “He could barely play sax so he turned himself into one of the experimental honker-screamer guys.” In one performance, Herold says, Dawkins busted his sax reed and kept going by removing his sax and “honkin’ and screaming” with only the busted mouthpiece. “And he comes to me at the end of the night and says, ‘Well, you’re gonna make up the difference in the tips, right?’ ‘Not for that!… No! No! Sorry, there’s limits.’”

Dip into another section, and you might come up with a gem like Jordi’s pulling out all the stops to give k.d. lang everything she wanted in her contract, down to the phrase “a fish dinner is preferred—hot salmon.” Turned out lang hated it: the rider was supposed to say “not salmon.”

In one passage, Herold relates a tale of then-local sax player Archie Shepp, for whom he’d had to front money for a cab and refund some tickets when Shepp ran late. Shepp didn’t, apparently, take kindly to accepting pay minus those costs. Herold says, “It was totally his error. Why should I absorb the loss?”

He then turns philosophical: “There are lots of situations like that in the music business where people just expected that in order to keep the peace, you’ll just eat it. … People just get to this place where they’re gonna hold the relationship hostage to something that’s really their responsibility. It just happened a lot in music, and it always took its toll on me to get into those situations with people.”

The more you read of Positively Center Street, the more you see Herold’s position as one of constant financial struggle. About the endless juggling of money from one place to another, he says, “It was ingenious and wilful and nervy, and anybody else, anybody else would’ve given up 90 percent earlier, instead of just staying there and eventually getting it to the point where, okay, I did a solid 15 years, and I can sell this.”

It all adds up to craft a view of the Iron Horse that most of us haven’t seen. There are stories of eccentric waitstaff, stories of rubbing shoulders with bigshots, and stories about the money dance. There’s even lots of paperwork, including curiosities like Hot Tuna’s rider, which includes a massive list of food and drink, from the expected deli platters (before and after) to bags of M&Ms and a case of Amstel Light.

Even if the business of the Iron Horse isn’t of interest and you don’t care for stories of dealing with musicianly excess, there are moments of pure Valley lore that make Positively Center Street, no matter its grab-bag nature, worth checking out. That the fate of one of Northampton’s gems sometimes came down to a couple of bags of M&Ms only reflects perfectly the Valley’s scrappy arts scene, a work in perpetual progress.•