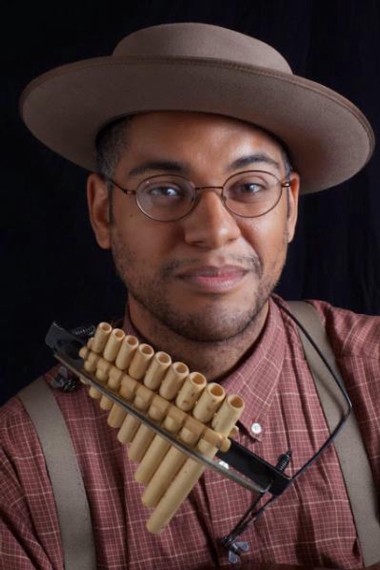 When American songster Dom Flemons arrives at the Iron Horse Music Hall on Thursday, Oct. 9, he brings with him a rich personal history as well as a wealth of musical archaeology and sociology stretching back through a century. His recent album Prospect Hill is an illustration of these paths crossing and converging.

Flemons was a driving force in the Grammy Award-winning African-American string band the Carolina Chocolate Drops before going solo at the end of last year. A native of Arizona, Flemons, with his original bandmates Rhiannon Giddens and Justin Robinson, formed the Chocolate Drops at the Black Banjo Gathering in North Carolina in 2005, also connecting with musical mentor and fiddler Joe Thompson.

Flemons recorded two solo albums while still with the group, but understands that Prospect Hill is getting more scrutiny and attention as his first post-Chocolate Drops recording. That knowledge dictated how he shaped the album from the ground up. Flemons also accepts that there will be some people who don’t know who in the world he is or where he came from.

“I try to take that into consideration just for myself, aesthetically keeping myself up to a standard,” he said. “Going solo from a very successful group like the Carolina Chocolate Drops, I’m vying for the fans that are interested in both, and are willing to go with me on whatever my trip is here.”

Flemons didn’t enter the solo stage of his career with any wild-eyed fire, but rather calm analysis of how to do it right—retaining his passion, avoiding musical missteps, and presenting a concise and meaningful package that expresses who he is to his audience, new and old.

“Usually with commercial viability in folk music, you have to see how much old-timey can be taken out for it to be commercially viable,” Flemons said. “That was something I tried in a very different way, to just keep it really rooted in old-time music even though there are progressive things that I’ve put into it. I wrote most of the songs and I did all the arrangements, so that was something I tried to do so people would see that I’m not leaving my past work behind per se, but that doesn’t mean I’m particularly trying to rehash it. I could do different things.”

Flemons figured the questions on people’s minds would be what he offered that was different from the Chocolate Drops, and whether he could expand from that. Flemons looked back at all the styles he had played over the years to figure out what to apply to his new work. What was called for, he says, was an alchemy of new and old, creating something timeless but without any sign of effort to do so, keeping it as natural as possible.

“This being my first record outside of the group, I had to make sure that people who don’t know who I am are able to go off with that,” said Flemons. “ I can’t bank on the group, because even though Carolina Chocolate Drops have become very popular, it’s only a small section of the world. People trip out if you don’t write songs, so I tried to sidestep it by making some older-sounding songs, because also people trip out if you start traditional and then go to songwriting after that. So I tried to do something that would work in both camps.”

In some cases, Flemons did choose old songs, as with “But They Got It Fixed Right On,” by Georgia Tom Dorsey and Tampa Red, and “Polly Put The Kettle On,” a traditional nursery rhyme that was transformed by Sonny Boy Williamson. But he also did a significant amount of songwriting, attempting to make the transitions between old and new seamless.

“I just wanted to show people some of the stuff I was rooted in, because I’m not like a lot of my contemporaries,” he said. “I’m not an old punk rocker that went folk. I’ve always been a folk singer, from the get-go. When I was writing some of the songs, I just wanted to make some simple songs, like a Fats Domino song.”

Flemons acknowledges creative debts to the likes of Jim Croce, Leonard Cohen, Bob Dylan, and Paul Simon when it comes to the craft of songwriting and the seriousness with which he takes it.

“All those guys are distinctive because they have songs that are very easy to understand,” said Flemons. “You just hear them once and you can understand it. Now with singer/songwriters—people have gotten so lazy. Everybody has an artistic statement, everybody has feelings and things like that, but that doesn’t particularly mean that they’re writing great songs. Songwriting is a different thing than putting your feelings on a record.”

It’s a long musical path Flemons is on, a continuum starting well over a century ago from which he’s recently forged new side trails while still looking back to where the path begins. It’s a journey he hopes other people can experience as vividly as he does. He plans to keep hiking the same path, and he’ll have his banjo with him.

“To me it’s just the beginning,” Flemons said. “I want to make more projects along these same lines, and just really try to have them be rooted in all these different types of music. And try to make good music that people can be moved by, because I feel like there’s been too much music that’s, ‘Oh, I bought it just because I didn’t have anything else to do.’ Music should be more than that. It should definitely move you more than that.”•