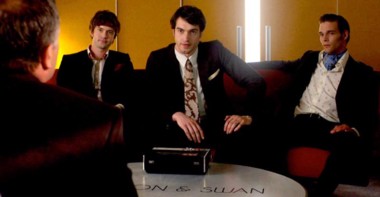 Now in its 18th year, the Northampton International Film Festival (NoHoIFF) has become a staple event for filmgoers—and perhaps more importantly, filmmakers—of autumn in Western Mass. As reliable as the turning of the trees, it returns this week to take over the town’s Academy of Music for a three-day extravaganza that reaches beyond mere screenings to create a multimedia conference that, for one weekend, turns downtown Northampton into a hotbed of networking events, panel discussions, and all manner of filmmaking hubbub.

It all gets underway on Friday, Oct. 10, when the first of the festival’s half dozen scheduled Shorts programs lights up the screen in a 2:30 screening. Offerings include Pint, a quick story about an unruly wedding guest; Dark Roast, a horror-comedy about a grim reaper who falls for the guy she’s sent to axe; and Things I Have Learned About Sex and Dogs, an Australian film in which a young woman shares relationship advice drawn from her years of dog ownership.

The first of a pair of opening day features is Wallabout, directory Eric McGinty’s feature debut about a young woman named Alex whose unusual lifestyle makes day to day sustenance a challenge. Coming back to New York—the film is named after one of Brooklyn’s oldest neighborhoods—after a decade spent as the muse to a famous filmmaker, she finds that life in the city is harder than that of a muse. Determined to make a go of it, she falls in with some less than angelic characters.

Next up is 3 Mile Limit, a remarkable true story that tells of one man’s effort to bring the rock ’n’ roll revolution to New Zealand in the 1960s. Based on the history of Radio Hauraki—a radio station that operated from aboard a boat moored in international waters three miles off the New Zealand coast—it offers an interesting and complementary history to our own, differently troubled, mid-century musical landscape.

Opening night wraps up with a reception at R. Michelson Galleries and a festival party at Packard’s, but I wouldn’t stay out too late—the projector starts up again Saturday morning at 11:30 and hardly rests until late Sunday night. It’s a marathon, but as with any marathon, you’ll feel better for having been a part of it. There’s far too much on the slate to do justice to in this space, but the full schedule, along with trailers, tickets, and more, is available at the festival website, nohoiff.org.

Also this week: Amherst Cinema is screening two wonderful old films that have inspired young cineastes for over half a century now. First up is John Huston’s adaptation of Dashiell Hammett’s detective story The Maltese Falcon, screening Sunday afternoon and Tuesday night. Humphrey Bogart became a legend with his turn as Sam Spade, a hard-boiled private eye who gets mixed up in the hunt for a rare statue. There have been any number of terrible mystery-movie knock-offs that derive from the Falcon; few have come close to the original.

On Wednesday, the theater brings in Jean Renoir’s wartime classic Grand Illusion, a stunning exploration of class and warfare during World War I which reveals that while nations were at war, the true divisions were not along the borders of country, but those of wealth, upbringing, and position.

The film screens as part of a series sponsored by Amherst College, designed to probe issues of culture in translation. Translator and scholar Cathy Ciepiela will be on hand to introduce the film and spearhead a 20-minute discussion of the film after the show.•