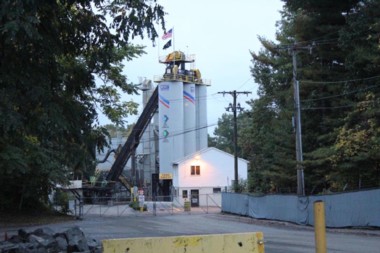 But the game may not be over, if neighbors of the plant have any sway.

The court ruling reversed an earlier decision by the Springfield Zoning Board of Appeals to revoke the plant’s permit. The ZBA had decided that the plant required a special permit because it would produce electricity through incineration. But the Land Court ruled that the term “incineration” applies to the elimination of “waste”—and that the green wood chips the plant would burn are not waste.

Therefore, the state court ruled, the Springfield zoning board had no authority to stand in the plant’s way. Residents living near the proposed facility say they were disappointed by the ruling, saying they worry the power plant proposed for next to Palmer Paving Corp. on Page Boulevard will only increase their burden of air pollution, truck traffic and around-the-clock noise. The neighborhood, a cul-de-sac of working class ranches, is a shrinking residential island amid a growing industrial strip.

Judie Christian has lived on Curve Street for 49 years and watched as the community changed around her. She says the neighborhood was quiet before Palmer Paving moved in. She says company officials have already “broken their word” to the community by filling it with truck traffic and noise that often keeps her up at night.

“I don’t think it’s the greatest area” to build a wood-burning plant next to the existing paving operation, Christian says. “There’s a bunch of houses right here.”

Christian says that while she has loved living in the neighborhood, she is thinking about leaving. She says that things have changed too much and that her chronic obstructive pulmonary disease makes it difficult for her, at 74, to tend to her house.

Down the street from Christian, Vikki Devine worries about how the plant would affect her two young children, particularly with the emissions it would send into the air. She says her 17-month-old son appears to have allergies and fears that the “chemical smells” coming from the existing industries nearby are making them worse.

“I understand they’re a business,” says Tim Groves, another Curve Street resident. “They have to do whatever they need to do for their business. As long as they’re not messing with our health.”

Groves also described a chemical smell that frequently emanates from the plant; he says he is confident the smell comes from Palmer Paving.

Palmer Paving, owned by the Callahan family, has long been connected with city government. The family is known to contribute to political campaigns and the corporation often gets the city’s largest paving contracts. David J. Callahan is the owner and resident agent on file for Palmer Renewable Energy.

Callahan did not respond to repeated calls for comment last week. The company’s lawyer, Thomas Mackie of Boston, provided this statement in response to questions from the Advocate: “Palmer Renewable Energy has complied with every legal and environmental requirement needed to bring this renewable energy project to fruition. We intend to move forward with this project in an expeditious manner and we are currently examining how best to proceed. We look forward to bringing jobs, economic development, and a new source of sustainable green energy to Springfield and the Commonwealth of Massachusetts.”

Though the Springfield City Council voted 12-1 to appeal the Land Court’s decision with the state Court of Appeals, Mayor Domenic Sarno says that he will not authorize legal fees to carry the litigation forward.

“In a number of meetings with groups on both sides of this ‘green energy’ project,” Sarno said in a prepared statement, “I have consistently stated that if this project passed the stringent federal and state environmental and health requirements, it would be dealt with as a jobs creating and tax revenue generating economic development project, which will provide 200 construction jobs, 50 permanent and well-paying jobs, as well as more than $1 million in local tax revenue. If it did not, the project would not see the light of day.”

After several attempts to contact Sarno for further comment, communications director James Leydon said the press release covered everything the mayor currently has to say on the matter.

Michaelann Bewsee of Arise for Social Justice, an activist group, has also filed an appeal in conjunction with William and Toni Keefe of Curve Street. Given that appeal, Sarno says there is no need for the city to spend money on its own.

Bewsee counters that the mayor is being “disingenuous” to use her group’s appeal as an “excuse” not to defend the ZBA’s authority. She says that he has always supported the plant.

Bewsee says she is looking for a lawyer to pursue the city’s appeal without charge; Arise’s pro bono lawyer, Joe Berman is handling Bewsee’s appeal. Bewsee said it’s important to fight another potential source of air pollution in Springfield, and that the regulations cited by Sarno will not suffice.

“Meeting the regulations doesn’t mean there won’t be any pollution,” says Bewsee. “Corporations pollute within the regulations all the time and we think those regulations need to be strengthened. The law doesn’t necessarily represent the highest form of justice, especially when it comes to environmental justice.”

John Bos, a climate change columnist who worked for a firm that had tried to build a biomass plant in Russell, said critics overstate the amount of pollution produced by wood-burning plans. He says that the regulations require specialized scrubbers that filter out 99 percent of all particulate matter—the microscopic particles that create a health hazard.

In addition to solar, wind and water-powered electrical generation, wood-burning plants can provide an important alternative to electricity generated by coal and nuclear plants, said Bos. While he said he doesn’t know details of the proposed Springfield plant, he generally supports such projects.

A number of major storms, he says, have mowed through local forests. Rather than leaving the trees to rot, Bos says we should be utilizing them for fuel. Otherwise, they release methane gas when they decompose —which he said is worse than carbon dioxide.

“In an ideal world we wouldn’t have to burn anything.”•

Amanda Drane can be reached at adrane@valleyadvocate.com•