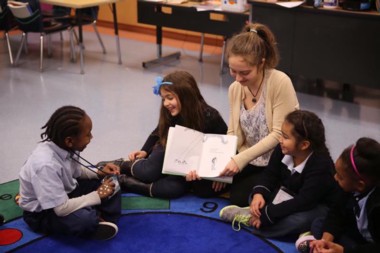 If you’re the type of person who watches a lot of PBS—and let’s face it, here in Western Mass., that’s a lot of us—you’ll likely be familiar with the recently released documentary Big Ideas for Little Kids. With an early November debut in the works, local stations have been diligent about airing commercials for the film, which is an exploration of a unique initiative designed to bring philosophy courses to the six- and seven-year-olds who attend a Springfield charter school. What you may not know is that the film was made by local director Julie Akeret.

A documentary filmmaker living in Leeds, Akeret has had earlier success mining her backyard for material. A few years ago, her film Theatre on the Edge—about Ashfield’s Double Edge Theatre communal performance troupe—took home a Regional Emmy. That film, like her latest, was presented by WGBY. And her well-regarded earlier film Someone Sang for Me shined a light on the worsening arts curriculum for at-risk youth, and the drive of educator and musician Jane Sapp to fill that widening void.

The new film (showing locally on WGBY-HD at 7:30 p.m. this Saturday) focuses on the program developed between Mount Holyoke College and the Martin Luther King Jr. Charter School of Excellence in Springfield. Of course, philosophy is not generally a part of second grade, but the MHC students bring it to their charges using picture books as a jumping-off point. The focus here is less on differing schools of philosophy and more on the philosophical pursuit itself—the youngsters learn the basic framework of philosophical discussion, including, crucially, respect for differing opinions. (A large notepad headed “How We Do Philosophy!” is studded with highlighted words like “listen,” “think,” and “why.”) “Philosophy,” says one young girl, is “something that could teach you how to learn.”

Watching the effect it has on these children makes a viewer wish this sort of program was the rule and not the exception. Like learning a second language, learning the basics of philosophical inquiry is something that seems easier for younger minds. But if the basics are quick to pick up, the skill will remain an essential part of their self-education for decades to come, and what began as an extension of a children’s book could well change the lives of the adults they will yet become.

Also this week: Two very different films about storytelling, theater, and spectacle come to Amherst Cinema this week. First up is a Saturday afternoon broadcast of New York’s Big Apple Circus, whose new one-ring show Metamorphosis will get beamed into theaters across the country. A two-hour event (and the first to be broadcast for the circus) that features all manner of classical circus acts—clowns, acrobats, and equestrians are showcased alongside contortionists and conjurors—the family-friendly show gets underway at 12:30 p.m.

Perhaps a bit less family friendly (but absolutely stunning) is the darkly sumptuous Pan’s Labyrinth, screening Wednesday night at 7 p.m. Director Guillermo del Toro’s (Devil’s Backbone, Hellboy) gothic fairy tale is set in Spain during the repressive Franco regime. In it, the young girl Ofelia visits the estate of her cruel adoptive father, a military officer charged with quashing a local rebellion. Stealing away to a nearby labyrinth, she discovers a world that is filled with monsters, fairies, and half-humans that will reveal the secret of her destiny.

There is nobody working today who has del Toro’s touch when it comes bringing to life that mix of light wonder and cold dread that is at the heart of our best fairy tales. If you’ve never seen this film, don’t miss your chance to catch it on the big screen. And if you have? See it again.•