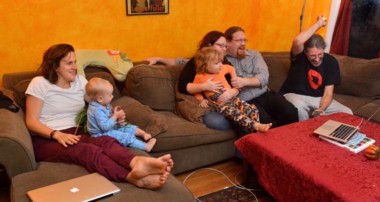 Glance at Michelle, Aimee, Micah and Ian on the street and you might assume they’re two straight couples — or two gay couples. But they’re all going home together.

That home is a large, sunny house in the Forest Park neighborhood of Springfield. It’s where this group of four polyamorous partners — a “quad’” — live, laugh, eat and sleep under one roof.

These four adults are intimately connected to each other, but they’re also open to new flings and encounters. And so they face an unusual challenge: running a communal household while tending to the myriad romantic relationships that hold the four of them — and their lovers — together.

“It’s structured chaos,” says Michelle. “But we’ve maintained it for years now because we come together and talk about how things are playing out.”

For years, the four of them slept together on a queen-size and a king-size bed pushed together. But it’s not the hedonistic free-for-all some might imagine.

Having kids, for example, changed everything. When Aimee and Micah had their son Connor, the two beds came apart. Aimee and Micah slept alongside the crib, while Michelle and Ian — both light sleepers — moved to a different room.

But kids weren’t the only complicating factor. “Polyamory” in Latin means “many loves,” but a polyamorous household also features a surprising amount of scheduling, financial planning and debate.

For daily logistics, they use a Google Calendar and a family email list. They also share a bank account, which they discuss at quarterly finance meetings. These are Type-A people, professional and well-organized.

Michelle Driscoll, 35, works in human resources in Northampton. She is married to Aimee Bouchard, 34, a lawyer in private practice. Each also has a deep relationship with one of the two men in the house: Aimee with Micah Schneider, 43, a Springfield math instructor, and Michelle with Ian Rose, 44, who works a corporate job in Hartford. And there’s no doubt in anyone’s mind: the kids have four parents, not two.

Just ask Connor. Micah is “Bubba.” Ian is “Daddy.” Aimee is “Mama.” Michelle is “Mama Too.” And at the most recent parent-teacher night at Connor’s school, the four of them showed up together.

Many poly people are straight, but all members of this quad identify as bisexual. Legally, Michelle and Aimee are the two spouses. But all four are committed to each other. “I think of the quad as a single relationship that contains a lot of inter-relationships,” says Ian.

“Our personalities are a good mix,” says Aimee. “Our common interests overlap just enough. We got lucky.”

Communication is a core value for Michelle, who used to facilitate meet-ups for a few local poly groups. Sometimes, she remembers, the meetings were a person’s introduction to the poly life.

“I’d hear newcomers saying they were surprised that people weren’t getting naked at the meet-ups,” she says. “But poly groups aren’t swinger’s groups. Some poly people are also swingers, and they’re looking almost exclusively for sex. But they’re two different identities.”

‘Poly” is a malleable term, but it’s all about consensual non-monogamy. Members of the poly community typically reject the concept of “love scarcity” — the idea that one person has a limited amount of romantic love to spread around. As the argument goes: we don’t apply this logic to our relationships with family and friends, so why should it be any different with our lovers?

Cheating on a monogamous partner isn’t polyamory. And it’s not polygamy, either — that longer-standing term is a narrower one that applies only to marriages. But many poly people do maintain a primary partner while they go about their dating lives. Sometimes, that primary relationship is among three people, or four, rather than two.

The poly groups in the Amherst area tend to skew young, Micah says, because of the university population. A poly group that met for a while in Hartford skewed older. A sizable Boston group called Poly Boston has members who range widely in age and experience.

In the Valley, a close-knit poly population means lots of dating within the group.

“I have no interest anymore in being someone else’s training wheels,” says Micah. “I don’t want to spend all of the time and effort it takes to meet someone, get involved with them, then find out that poly isn’t really for them. I don’t want to go through that anymore.”

But there are other advantages to dating within the group. You may not be well-acquainted with a potential partner, but “you probably know the people they’ve dated,” Micah said. “So you can ask them about them.”

It can be challenging to make such thorough commitments to others. But the tendency runs deep with this clan.

“It’s how I’m wired,” says Micah. “How many people I’m dating at the time has no bearing on whether or not I’m poly.”

“I’m low on the jealousy threshold and high on the sexual threshold, and I’m a big extrovert,” says Michelle. “So multiple relationships are a good fit for me. But I don’t see it as a sexual identity.”

Connor is now three, and he has a one-year-old sister named Katie (also conceived by Aimee and Micah). Childcare comes in part from Ian’s mother, who lives on the ground floor of the house. Throw in four cats, and the place feels awfully busy sometimes.

“It’s really hard to get alone time in this house,” says Micah. “Especially with children. Right now, none of the bedroom doors lock. We’re changing that. We need to be able to keep the kids out.”

Before most decisions can be made, he adds, everyone needs to be consulted. It can be time-consuming.

Establishing a home life took time, and it wasn’t without its bumpy patches. Ian moved in later than the other three — along with his former wife. The original idea was to create a cooperative home of at least five people.

“But it didn’t work out as envisioned,” Micah said, referring to Ian’s wife. “She was a willing participant. But it just wasn’t working, so she left the house.”

As with any relationship, there are fights and bruised feelings. But in a polyamorous relationship, jealousy requires an extra dose of introspection.

In a monogamous relationship, “there are certain things that you just get to be angry about,” Aimee suggests. “Whereas for us, when I feel jealous about something, I need to really look at what’s making me feel that.”

“It’s uneasy,” says Ian. “It’s so much easier just to blame the other person when you’re upset.”

When a duo within the quad quarrels or needs more time together, the group will band together to work out a schedule giving the couple less “kid duty” or budget some extra money for a date night.

“Most problems that you could identify as poly problems are just relationship problems, honestly,” says Micah.

Ian remembers the first time he discussed his poly life with his mother.

“It was awkward,” he says. “She didn’t understand. But she wanted to talk about it. She was open to learning. It was an adjustment, but she’s grown into the idea over the years.”

“Coming out as poly was a hell of a lot harder for me than coming out as bisexual,” Michelle says. “You need to educate people more about what it means. When you say you’re bisexual, at least people kind of get it.”

Michelle is open about being polyamorous. Not having to hide her relationships was an important consideration when selecting a job, she says. “My boss and my co-workers have been over to the house for parties. They’ve seen my life.”

Ian’s open, but fairly quiet about it. “I don’t wave a banner at work. But it comes up in conversation sometimes, and it’s no big deal. I have photos of everyone up at my desk.”

Aimee is a solo practitioner, so she doesn’t have a work crowd to come out to. “But I’m honest about it with colleagues that I’ll see around the courthouse. I don’t feel the need to let everybody know. If it’s pertinent, I’ll mention it.”

But that’s work. They have a lot of fun, too. Often, Friday and Saturday night are for getting together with other partners outside of the quad, or with extended friend groups Still, the four of them spend a lot of time together. They go to museums and festivals. They take trips together to visit family — and they do have a lot of family. And they all try to sit down together for dinner at least a couple of times a week.

“Here are four adults — five, counting Ian’s mom — that are actively involved in the betterment and well-being of these small things,” says Michelle.