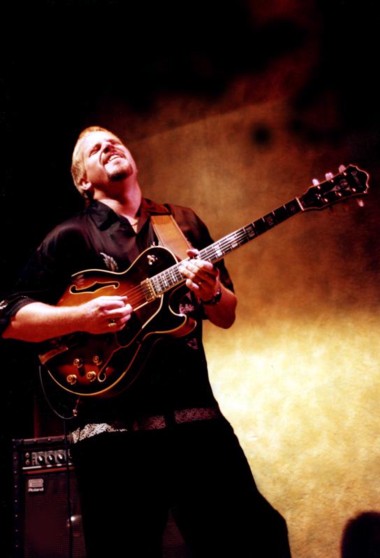 In 1975, guitarist Dave Stryker writes in the liner notes to his recent release Eight Track, he had a 1969 GMC van outfitted with an eight-track player that often required the assistance of a jammed-in matchbook to work. But good music is good music no matter the medium, and Stryker’s barely-functional eight-track still offered his eager ears the latest exploits of Miles Davis, Santana, Blood, Sweat and Tears, and other pioneers of the era.

As a young jazz musician, Stryker continues, he often populated his sets with various songs from the 1970s, often quipping afterwards, “That last tune is from my next record — Dave Stryker plays the Hits of the eight-track.” With Eight Track, released in 2014, his threat has come full circle, or, perhaps full circle and then full circle again, creating a perfect figure eight.

The album’s track list reads like some Sounds of the 70s record you see advertised late at night, but actually want to hear. Stryker’s tunes include works from Curtis Mayfield (“Pusherman/Superfly”), Stevie Wonder (“Superwoman”), Bread (“Make it With You”), The Fifth Dimension (“Aquarius,” of course), and even Pink Floyd (“Money”).

Stryker is joined by drummer McClenty Hunter, organist Jared Gold, and — thankfully — vibraphonist Stefon Harris. (Despite the success of earlier masters like Lionel Hampton and Milt Jackson, the vibes have always been and remain an under-used and under-appreciated instrument, even in jazz.)

All of the 10 tracks swing with a soulfulness that is especially appropriate on an album of 1970s covers. But despite its almost-Muzak melodic interpretation, the album’s best offering might be “Aquarius,” which finds each of the quartet’s capable musicians soloing relentlessly. Halfway through the song’s seven minute run, I had completely forgotten what song they started out playing — always the mark of a successful journey in the jazz world.