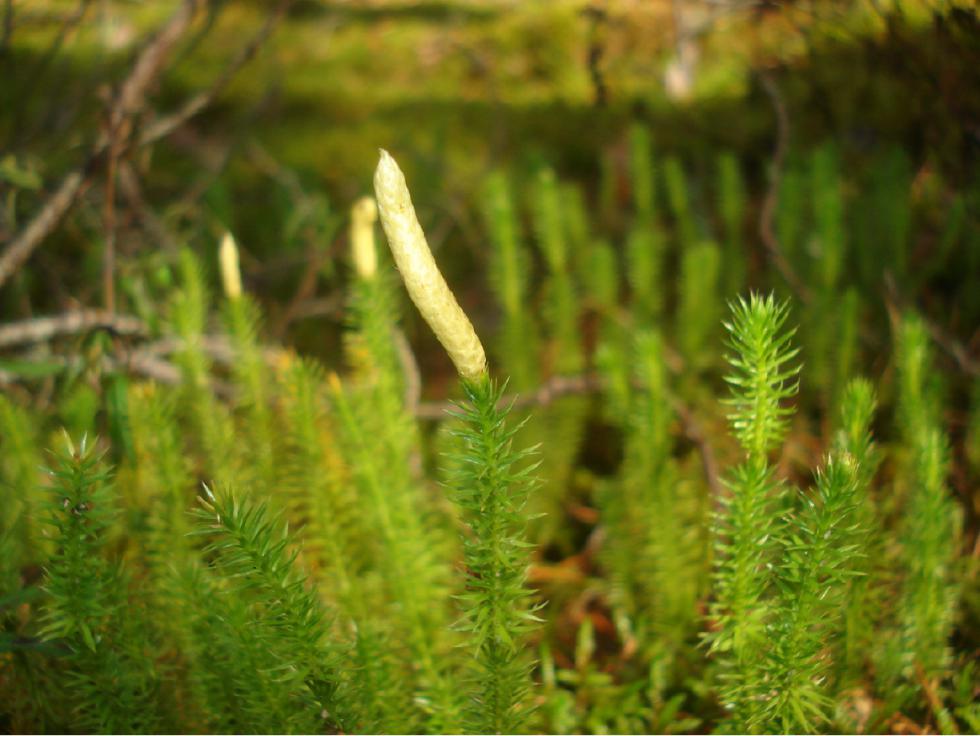 This winter we haven’t gotten enough snow. “Enough” is what allows for cross-country skiing. Even in New Hampshire, where I spent part of the holidays, the snow cover was patchy or absent. We passed a wet hour tubing at a ski resort. The wet snow and underinflated tubes, which we paid some embarrassing amount for, made for slow sliding. As disappointing as the snow experience was, it made hiking easier. The lack of snow meant that the lycopods were uncovered. Some lycopod species are called clubmosses, or princess pine, but they’re neither mosses nor pines. Unlike mosses, lycopods are vascular plants with tubes that facilitate the transport of sugar and water through the plant. Unlike pines they don’t make seeds. Neither has flowers or fruits. If you look closely at the right time of year, you will see a brownish yellow structure sticking up from the top of the plant. This is a strobilus and functions somewhat like the cone on a pine tree. Inside the little leaflets on the strobilus are cells called spore mother cells which produce spores. Spores are a bit like seeds except when they germinate they grow a small plant called a gametophyte, which makes sperm and egg cells. Once the sperm fuses with an egg cell a new lycopod grows out of the soil. The fusion of sperm and egg happens in the darkness of the soil as it should. Most lycopods these days are small, low-growing creatures that make a pretty green covering for the shadowy forest floor. They grow slowly and don’t need to make flashy fruits or flowers so don’t need a lot of energy from sunlight. Four hundred million years ago or so there were tree-sized lycopods called lepidodendrons. These died out even before the dinosaurs. Luckily for us they contributed a great deal of the carbon that became our coal deposits. The energy they used from the sun 400 million years ago to take carbon dioxide out of the sky is what we use in coal fired power plants today. Coal isn’t the only contribution that lycopods make to our economy. The spores have some unusual properties and so are harvested in large quantities as lycopodium powder and sold for about a hundred dollars a pound. These spores are high in fat which makes them slippery, though not tasty. The slipperiness was once used to lubricate latex products like condoms and surgical gloves. Unfortunately, it also tends to irritate skin and people didn’t like that. All that fat also makes it flammable. Most famously lycopodium powder was used to create the large red burst of smoke and flame when the wicked witch appeared and disappeared in the original Wizard of Oz. I got to thinking about these little green plants because I realized they probably still photosynthesize in the winter and I wondered if it slowed down much. As far as I can tell, the question hasn’t been studied in lycopods, but in other species, as the temperature drops, the plants stop growing but continue to use light energy to turn carbon dioxide into sugar. This helps protect them from the cold. As the water in their cells becomes more sugary it doesn’t freeze as easily. I wish I could protect myself from the cold by eating more sugar … I’ll keep trying anyway.•