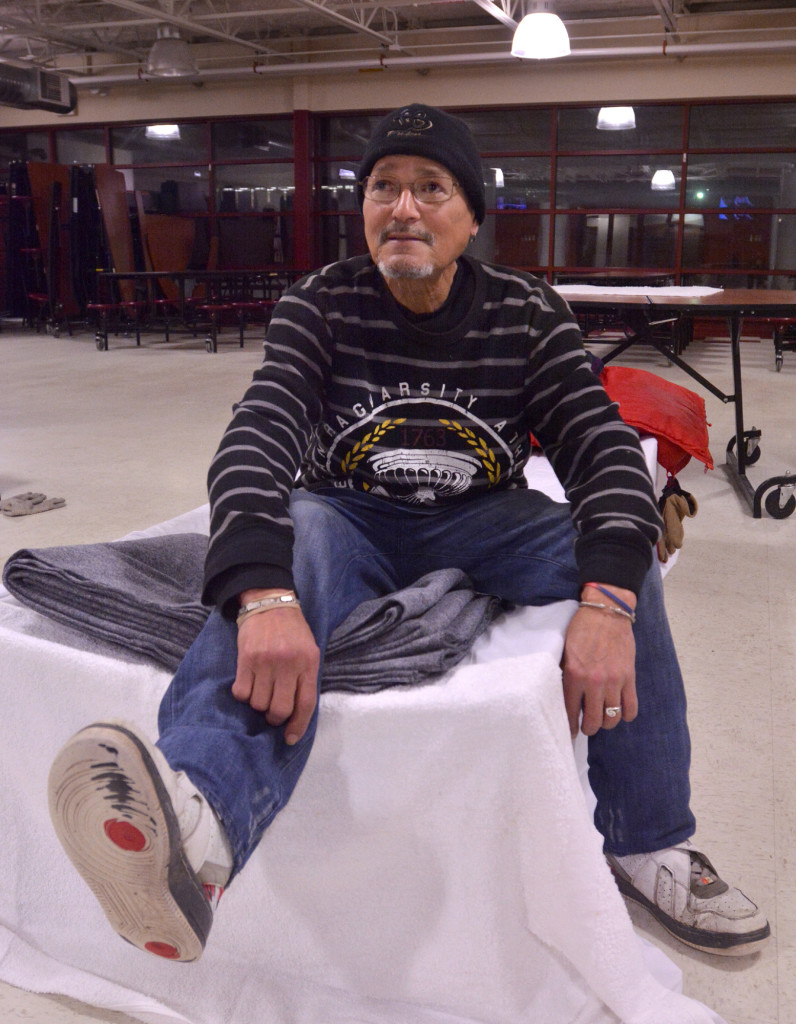 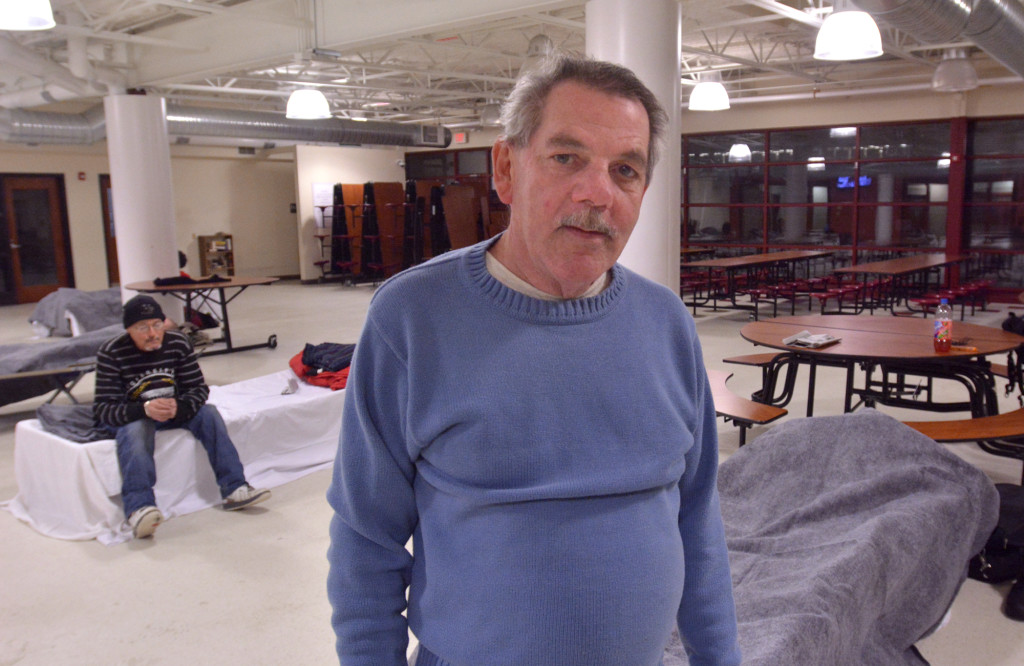 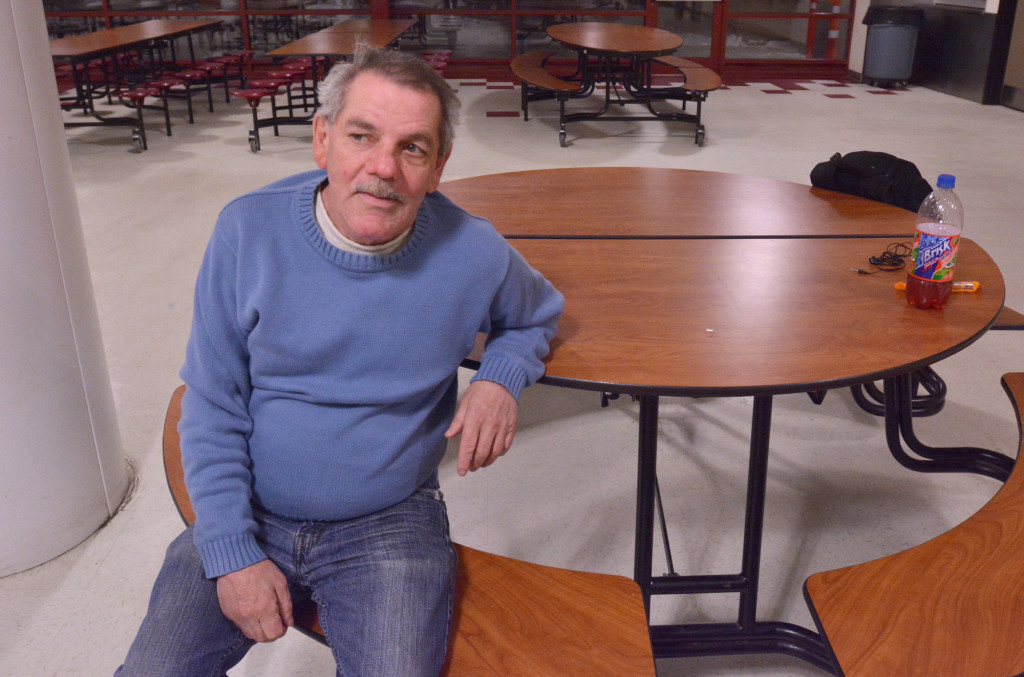 Four days ago, Tomás Astacio slept outside for the first time. He found a locked, empty building on Winter Street in Springfield and climbed up to the second floor, where he spent the night on a balcony.

The temperature dropped below freezing that night — 22 degrees with wind chill — but he says he couldn’t go back to the room he’d been renting from a friend in Indian Orchard. That friend, he tells me, drinks too much. “And when he drinks he gets violent and stupid. He threw me out.”

It’s Astacio’s third night at the Worthington Street shelter. He’s sitting beside a new friend, John Comeau, of Chicopee. Comeau has been staying here for three weeks, so when Astacio arrived a few days ago and didn’t know anyone, Comeau introduced himself and offered to talk about life at the shelter.

But it’s only tonight, as a predicted blizzard rolls in, that they’re really getting to know each other.

The storm and the dire predictions surrounding it have spurred a spike in shelter guests. Friends of the Homeless’ 110-unit men’s dorm filled up quickly, and staff have turned the cafeteria into an overflow sleeping area. That’s where Astacio, Comeau, and 14 other men are sleeping tonight.

It’s open and clean in here. Bright lights shine on the white and gray tiles. Large cafeteria tables on wheels stand along one wall, folded up neatly in rows. Nearby in a quiet corner, the two friends sit talking with me. Their beds are made — folding cots with matching gray blankets provided by the shelter — and they have a few hours to kill before lights-out at 10.

Astacio is a slight, kindly-looking Puerto Rican man, 60 years old, with a short salt-and-pepper goatee and a wide smile. He fidgets often, adjusting his black ski cap, bouncing his knee, and clasping and unclasping his thin hands. “Thank God I’m here,” he says. “This is a blessing.”

Comeau nods. He’s a short stocky guy, 61 years old, with a swoop of gray-black hair across his forehead. Unlike the wiry Astacio, he speaks and moves slowly. “The worst blizzard I saw was in ’78,” he says, referring to the historic nor’easter that slammed Massachusetts with two feet of snow in 24 hours. “There’s been nothing like that since.” He tells us about working construction in Worcester that winter. Those were long days, unloading rock salt from railroad cars, he says.

Astacio has no memory of that blizzard, although he remembers the challenge of adjusting to winters in New England after spending his childhood in Puerto Rico.

He tells us about taking his kids, who were still young, to a small park on Wilbraham Road, where they played in the snow for the first time. “It was a shitty park, but to us it was heaven,” he says. “I remember being freezing, watching them playing. Little kids, they don’t feel the cold when they’re playing.”

He shivers his shoulders and smiles.

Both Astacio and Comeau plan to stay at the shelter for a while. Astacio receives disability assistance, and he hopes to get an apartment of his own soon.

Comeau doesn’t know what comes next. In the last six weeks, he says he’s been to the hospital three times to detox from his alcohol addiction.

For tonight, though, they’re just trying to relax. This cafeteria space has two wall-mounted TVs — a luxury not available to those staying in the regular dorms. And the guys resting on the other cots have generally been keeping quiet.

One TV is tuned to the Weather Channel, which has painted a pink and white band of swirling storm front across the East Coast. The other TV is playing Divorce Court. Some of the guys are lying propped up in bed, their fingers interlaced behind their heads.

Those who haven’t climbed into bed yet are milling quietly around the cafeteria. At a folding table nearby, two young men in sweatshirts are playing the card game Magic: The Gathering, speaking in a blend of English and Spanish about girls, clothes, and —for some reason — cheesecake recipes.

An older man with tousled gray hair and a beard comes back from the shower carrying a wet towel and wearing only a pair of dress pants. He walks over to the dark glass and peers into the night. “Is it even snowing?” He pulls the door open, and for a moment the room gets blasted with icy wind. A few people look over at him. After a moment he shuts the door and walks back to his cot, running one hand through his wet hair. “Yep,” he says.

By 9, the room is so calm and quiet that the sounds of small happenings are amplified. One guest shuffles and rearranges a stack of crumpled papers. Another groans softly as he does some standing stretches. A young man plays some 90s hip-hop music from the speaker on his phone — “Are You That Somebody” by Aaliyah, then into “Gin & Juice” by Snoop Doggy Dogg — before he switches over to a solid 45-minute block of Kanye West singles. The neighboring cots don’t object.

For a few minutes, the stack of bath towels sits depleted. An intake worker refills it. A thin middle-aged man takes one and goes to leave the room, but the staffer stops him. “Hey man. Only one shower. You gotta wait.”

At 9:30, as the hour for lights-out approaches, Comeau sits on his cot. He has one bag of belongings, which lies underneath him. Others have stored their things in the same way: mainly backpacks and plastic bags. Personal sets of boots, shoes, flip-flops, gloves, and scarves lie tucked underneath cots as well.

Astacio is already in bed, unmoving. Most of the guys fell asleep around 9 o’clock. As Comeau climbs into bed too, the TV above him plays an ad for the lottery. A thick storm cloud of cash rolls in, and dollar bills start to fall. They accumulate in drifts at the bottom of the screen as two words appear in solid-gold, shining block letters, commanding the audience to WIN MILLIONS. But these viewers, stretched out and bundled up, have already closed their eyes.