Band Under the Stairs – The Ambiguities Return with Basement Suite 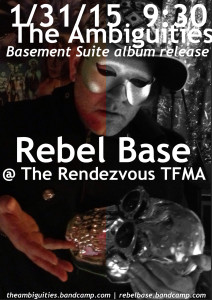 In 1976, the Ramones charged out of New York City proclaiming, “I Don’t Wanna Go Down to the Basement.”

“There’s something down there,” sang lead singer Joey, with a delivery that illustrated his reluctance and dread.

Now almost 40 years later, Greenfield band The Ambiguities, founded by local artist and musician Daniel Hales, is asking listeners to bottle up their fears and follow as the group opens up some cellar doors and plunges headlong into a subterranean quest on its newest album Basement Suite.

The journey begins with “Hungover Dragon.” Mixing lyrics about psychic wizards and the aforementioned dragon (which is trapped inside the body of a drunk) with a slowly unfolding rhythm, the track is a fitting entry point. But Basement Suite isn’t all about fantasy and things that go bump in the night.

“Ambiguity Stew” is a short, funky blast that samples the intro from “It’s Live Over Here” by Luther Rabb complete with the crackling playback of an old vinyl record. The song is only 50 seconds long, but still manages to fit in a bevy of lines including a rhyme that pairs mention of ‘80s rapper Tone Loc with the phrase hard-boiled yolk.

Singer/ master of ceremonies Hales culled inspiration from his day-job as a teacher for some of the lyrics for another short tune, “X Formation.” Riding along with finger-snaps and distant drum sounds, the song will remind listeners of the type of schoolyard chants or taunts that pop up during Double Dutch games complete with diss-filled language and bratty attitude.

There is no sign of childhood shenanigans, however, on Basement Suite’s moody title track. Unfolding through three parts over nearly seven minutes, the composition conjures some of the dread that Joey Ramone sang about in the ‘70s.

As the suite begins, Hales’ voice slowly emerges from electronic beats beckoning listeners to, “Come on down into my basement” and “Breathe in the mold spores.”

Though these lines and the remaining lyrics to “Basement Suite” repeat themselves, the delivery evolves. Hales’ vocals transform from a lonely croon to a distorted cat-call filled with menace. A mixture of sounds bubble up – solitary guitar, whining noise, and distant singing. Liner notes for the album even list piano, violin, and a drum-like instrument called a tambo as being used over the course of the composition.

Watch the video for the “Basement Suite” by The Ambiguities here:

After venturing through such an unpredictable soundscape, the impact of Basement Suite’s final number is all the more startling. “When It’s Time To Go” takes an almost country-like turn with electric guitar twangs providing the accent to Hales’ shouts. Sample lyrics include, “You gotta split before you start talking shit,” and “You gotta say later before you start talking like a hater.”

The message of such a song, some would argue, is pretty clear – know when to leave, know when to stop, or just know when to get when the getting is good. It’s a message both The Ambiguities and Basement Suite understand. Neither the band nor the record overstays its welcome. In fact, no matter what Joey Ramone sang about in ’76, there just might be a few listeners who will want to return to the basement Hales and company have created again and again. There’s something down there all right, but it’s not something to be feared. It’s something future searchers will want to explore.

For more information on The Ambiguities and Rebel Base please visit www.theambiguities.bandcamp.com and www.facebook.com/pages/Rebel-Base.