I was in Singapore last month when, by happy coincidence, the Singapore Fringe Festival, an annual showcase of alternative theater and visual arts, was underway. Over half of the festival’s 11 productions were homegrown, and I caught four of them. The performances (in English, the lingua franca in a country with four official languages) were fascinating, and attended by gratifyingly young audiences. They all showed imagination and vitality, and all of them sprang from contemplations of compelling themes.

This year Singapore is celebrating its 50th anniversary of independence. After being expelled from the fledgling Malaysian federation in 1965 over policy disputes and ethnic tensions, the “little red dot” of an island quickly transformed itself from a trading outpost of the former British Empire into an economic powerhouse, financial hub and, not incidentally, authoritarian state.

Testing the limits of free expression and government tolerance has been a constant for the city-state’s arts community, and while stepping over the line won’t get you thrown in jail—not anymore, anyway—artists continually engage in a convoluted dance with the authorities over what’s permissible and what would in fact step over that unspoken, ever-shifting, often arbitrary line.

Singapore is known for its equatorial climate, clean streets and polyglot population, as well as its one-party rule wrapped in a parliamentary fig leaf, its stringent laws enforced with the proverbial iron fist in a velvet glove. You can go to jail for smoking a joint—and executed for selling them. But while homosexuality is also a crime, that offense against conventional morality is rarely prosecuted. As I saw in the first Fringe show I attended, you won’t get arrested for being out, and gay issues, including AIDS, are the subject of open discussion and activism.

With/Out is a cyber-reconstruction of a one-man show performed in 1999 by Paddy Chew, the first Singaporean to come out as HIV-positive. That public admission ignited a national discussion of a reality that had been cloaked in secrecy and ignorance, and his monologue—part wry confessional, part painful history, part cabaret-camp—brought it further into the public square. Chew died just a few months after that performance, which was developed by The Necessary Stage, perhaps Singapore’s most aesthetically and politically daring small theater. Now multimedia artist Loo Zihan has recreated it as a multilayered tribute to the man and reflection of his impact. 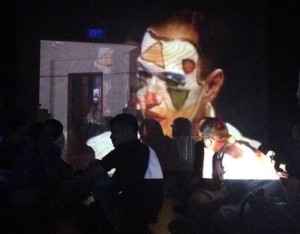 In the black box studio of the Center 42 arts space, a video of Chew’s 1999 performance danced across three translucent screens, the voice falling in and out of synch with the image, while the young audience, seated randomly on the floor of the darkened room, were themselves being videoed. Meanwhile, downstairs in the art center’s bright white gallery, newspaper accounts of Paddy Chew’s life and death lined the walls while a cadre of technicians monitored a real-time webcast of the show and fielded responses from viewers around the globe. At one of the stations, a verbatim transcript of Chew’s dialogue was read aloud into a microphone—a contemporary voice overlaying, and thus affirming, the original.

On the night I was there, the reader was Haresh Sharma, co-founder of The Necessary Stage. He and his TNS partner, Alvin Tan, founded the Fringe Festival, now in its eleventh year. This year’s theme was “Art and Loss,” providing platforms for artists, as an essay in the Fringe program put it, “to straddle between what-was and what-is, and in doing so, open our horizons up to imagine what-could-be.” 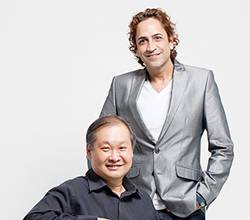 Both plays are elliptical meditations on grief and the challenge of a suddenly altered future. The first one playfully and poignantly imagines a cow mourning her dead mate, performed by the distinctly unbovine Sharda Harrison, lithe and graceful, accompanied by a recorded voice-over and a homespun soundscape created onstage by Bani Haykal. The other piece finds a young woman (Ethel Yap) newly arrived in Purgatory—“The Middle,” halfway between life and eternity. In a sequence of vignettes she recalls a lifetime of hurts and joys, in the company of a whimsical guide (Edith Podesta) who appears in various guises, from fairy godmother to Blanche DuBois. 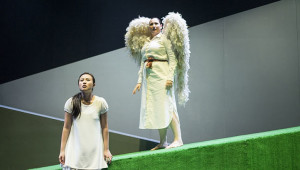 Although both plays were sometimes frustratingly ambiguous (I didn’t realize till later that the action in the second piece runs backward, and my partner didn’t realize the first one is about a cow), I found this show the most sophisticated and compelling of the four I attended—thoughtfully conceived, skillfully performed and emotionally rich. The remaining two, despite their weaknesses, offered intriguing insights into contemporary Singaporean society.

Performance artist Pat Toh began her solo show, Terra Incognita, with a surprising statistic. According to a recent crowds-in-motion study, Singaporeans are the world’s fastest-moving pedestrians. She evoked the city’s hurry-up lifestyle by walking the stage, in an ever-accelerating series of ever-shrinking squares and diagonals, for ten solid minutes. She then contrasted her own headlong hurry with her grandfather’s daily rambles, one slow foot in front of another in a walking meditation. The piece contemplates the elusiveness of time, the fragility of life, and finally the body’s disintegration with age. But the hour-long performance felt attenuated by unnecessary repetition and over-deliberation, and weakened by the performer’s affectless vocal delivery, which made it feel more like a news report than an emotional journey.

Generational connections and tensions also form the core of The Malay Man and His Chinese Father, staged on a long platform in a darkened gallery of the National Museum of Singapore. In this wordless piece, performed by Yazid Jalil and Michael Tan and accompanied by the Malay singer Asnida Daud, two men enact archetypal rituals of dependency. At first clad only in jockey shorts, they face each other for several long minutes, then begin hesitantly to touch (a rarity in itself for Asian men), finally embrace, then break apart, and go on to perform a repeating series of quotidian routines.

They carry each other, recalling the boy’s infancy and the old man’s helpless old age; dress each other, the father in t-shirt and pajama bottoms, the son in a blood-red kebaya, the traditional Southeast Asian women’s gown. The son bathes his father, a little too roughly at times; the father applies lipstick to his son’s barely obedient lips. Each repetition cycles between intimacy and rejection, attraction and repulsion, love and hate. But as in Terra Incognita, I found the often labored gestures and repetitions diluting the piece rather than focusing it, and also found that a program note was necessary to understanding just what the piece was intended to mean. 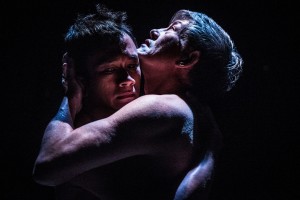 Given its title, The Malay Man and His Chinese Father can be seen as more than a domestic drama, but as a metaphor of Singapore’s uneasy ethnic relations. As a friend told me, religion and ethnicity constitute “the third rail” of Singaporean society. Notwithstanding the city’s incessantly proclaimed “racial and religious harmony,” that concord is apparently less than skin deep. In a country whose birth was attended by race riots and where the ethnic Chinese majority holds almost all the political power, peace is preserved by “harmonious” propaganda and—crucially for the arts—vigorous censorship of anything suspected of criticizing or mocking one of Singapore’s various religious and ethnic groups.

During my visit I was able to speak with several key figures in Singapore’s bustling theater community about this and other issues affecting their work. The conversations, as interesting and enlightening as the Fringe shows themselves, gave me a deeper understanding of the state of the arts and politics in this strange, contradictory mini-nation. A report on those discussions will be in my next blog, Singapore, part 2: Censorship.