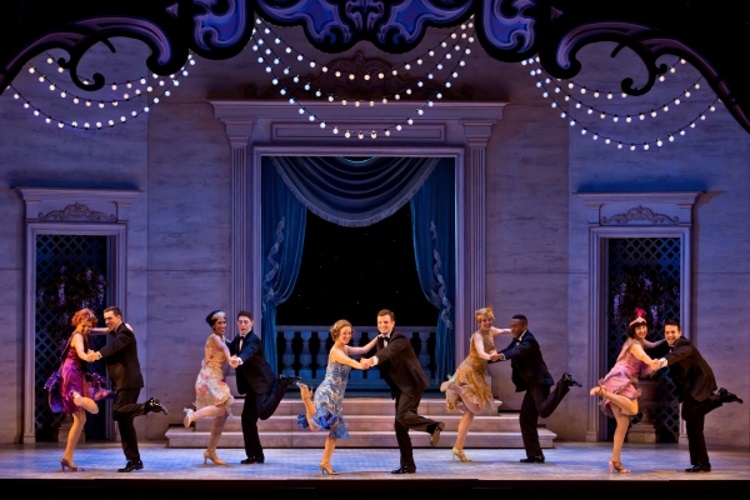 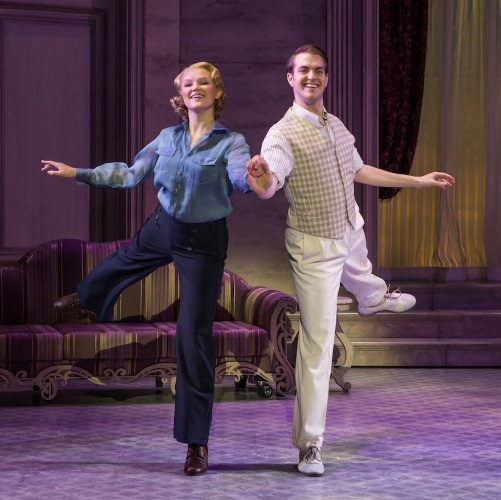 They just don’t make musicals like they used to. Except when they do. Nice Work If You Can Get It, playing at the Bushnell in Hartford through February 8th, is a 1920s musical that premiered on Broadway in 2012. It was whipped up by Joe DiPietro from the skeleton of a 1920s musical with bits and pieces of other 1920s musicals, recycled and repurposed – a new, found-object piece of art.

The basis of DiPietro’s script is Oh, Kay!, a 1926 piece of fluff written by Guy Bolton and P.G. Wodehouse (he of Jeeves and Wooster fame) with songs by George and Ira Gershwin. The thrust of the original Prohibition-era plot survives, but only a couple of the original songs. Instead, the score consists mostly of the Gershwin brothers’ songs from other shows. Which is appropriate, since in musicals of that era the relationship between book and score was often tenuous at best. (Indeed, I’m told that the original score for Oh, Kay! was composed before Wodehouse and Bolton even got to work, and most of that first set of songs were cut because they couldn’t be winkled even sideways into the plot.)

Dressing up the old girl in new clothes gives the creators of this concoction the freedom not only to fiddle with the original book (though the plot remains as effervescently silly as the original, and Wodehouse and Bolton’s dialogue must have been funnier than DiPietro’s hit-and-miss one-liners) but also to create a much stronger score featuring the pick of the Gershwin songbook.

So in addition to “Someone to Watch Over Me,” a golden standard that actually was in Oh, Kay!, we hear “Let’s Call the Whole Thing Off,” “’S Wonderful,” “But Not for Me,” “Fascinating Rhythm” and of course the title song, along with lesser-known numbers that provide plot points and dance cues. The Gershwin showcase is augmented by the insertion of some dozen cheeky quotations from George’s orchestral pieces – notably Rhapsody in Blue, strains from which provide a scene-change interlude, transitions in a second-act medley and the very last notes of the piece as the curtain falls.

A self-mocking Gershwin rarity also pops up. It’s “By Strauss,” a tongue-in-cheek paean to the classics, which begins, “Away with the music of Broadway / Be off with your Irving Berlin / I give no quarter to Kern or Cole Porter / And Gershwin keeps pounding on tin,” and is performed in a contrapuntal duet with “Sweet and Lowdown,” a ditty in praise of honky-tonks.

Like its model, Nice Work revolves around a feckless playboy, Jimmy Winter, who gets involved with a lady bootlegger whose gang is hiding out with its haul of smuggled hooch in his Long Island summer cottage (read: mansion), thinking no one’s there out of season. When Jimmy arrives with his brand-new bride on their honeymoon, complications, disguises and mayhem ensue. The stage soon fills with chorus girls in pursuit of Jimmy and the vice squad in pursuit of the hooch, and voilà! we have a singing/dancing chorus. 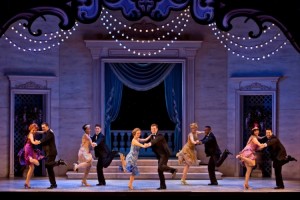 The large and spirited cast of this touring production give the material everything it needs and in some cases more than it deserves. They’re bright and energetic, strong singers and nimble dancers. Alex Enterline is a winningly goofy Jimmy, recalling a toothy Dick van Dyke more than the man who forever “owns” several of the show’s numbers, Fred Astaire.

Mariah MacFarlane, a feisty little powder keg, is Billie the bootlegger, a tomboy whose attempts at ladylikeness suggest Shakespeare’s Rosalind in reverse. Her rendition of “Someone to Watch Over Me” embodies that contradiction, as she sings “I’m a little lamb who’s lost in the wood…” while gripping a rifle. 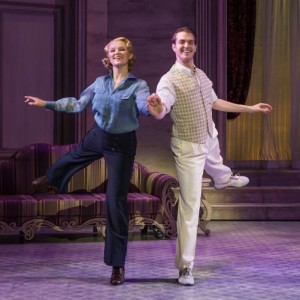 Rachel Scarr plays Jimmy’s newly minted wife (his fourth), a simpering babydoll who’s “the finest interpreter of modern dance in the whole world,” a wicked parody of Isadora Duncan. And in a tribute to another dance pioneer, her narcissistic bubble-bath number, “Delishious,” includes a Busby Berkeley bevy of beauties bursting from the foam.

In a cast of youngsters, two older women steal a lot of the comic limelight. Stephanie Harter Gilmore is a strait-laced temperance firebrand (shades of Carrie Nation, as she torches a dockside speakeasy) who becomes the star of the show’s obligatory drunk scene, complete with chandelier-swinging. And Barbara Weetman delivers a mama-ex-machina cameo appearance with a martini-dry hauteur that put me in mind of both Bette Davis’s Margo Channing and Tim Curry’s Frank-N-Furter.

The show exploits, indeed revels in, devices and conventions from the era it emulates – from the chorus line of boys and girls who burst into song-and-dance at the drop of a downbeat, to the duets and mini-scenes staged in front of the curtain to cover a set change, to the cut-rate jokes delivered with insouciant punch. All these touches add to the show’s nostalgic charm, as well as its verisimilitude: a genuine ersatz Jazz Age musical with a pastiche plot and a greatest-hits score.