Ramping Up Blarney: Last year’s blowout ended in chaos — what will this year’s bring? Ask Fade and Yik-Yak. 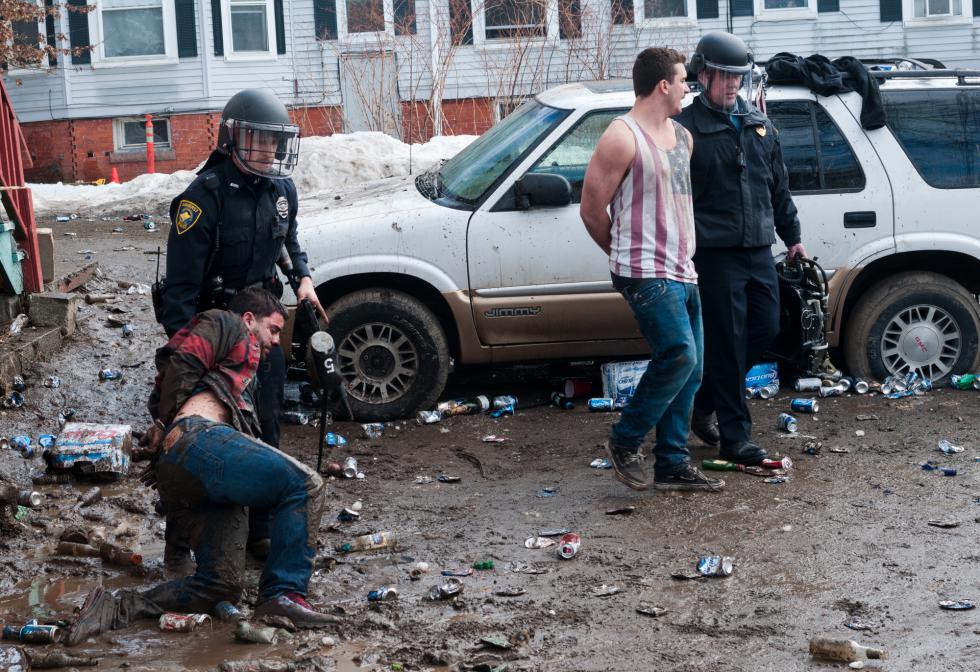 JASON PICARD An officer helps a highly intoxicated man to his feet while another escourts an apparently sober individual away from the scene that was forcibly dispersed of several hundred people less than a half hour before, behind an Amherst residence near the corner of North Pleasant St. and Fearing St., on Saturday afternoon, March 8th. 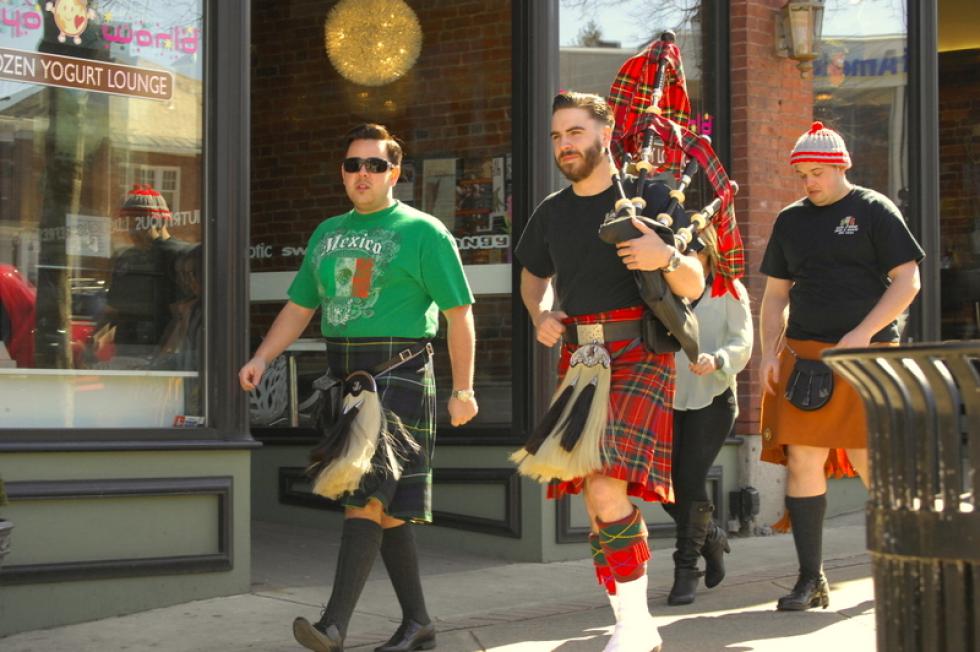 TOM RELIHAN A bagpipe player prepares to enter McMurphy's Uptown Tavern on North Pleasant Street in Amherst during the Barney Blowout on Saturday. 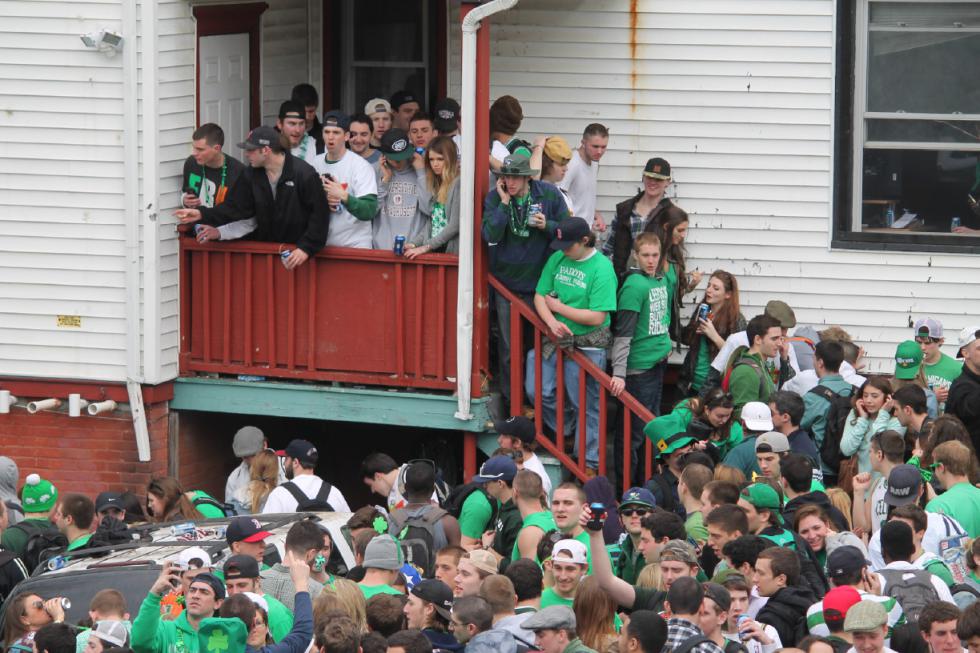 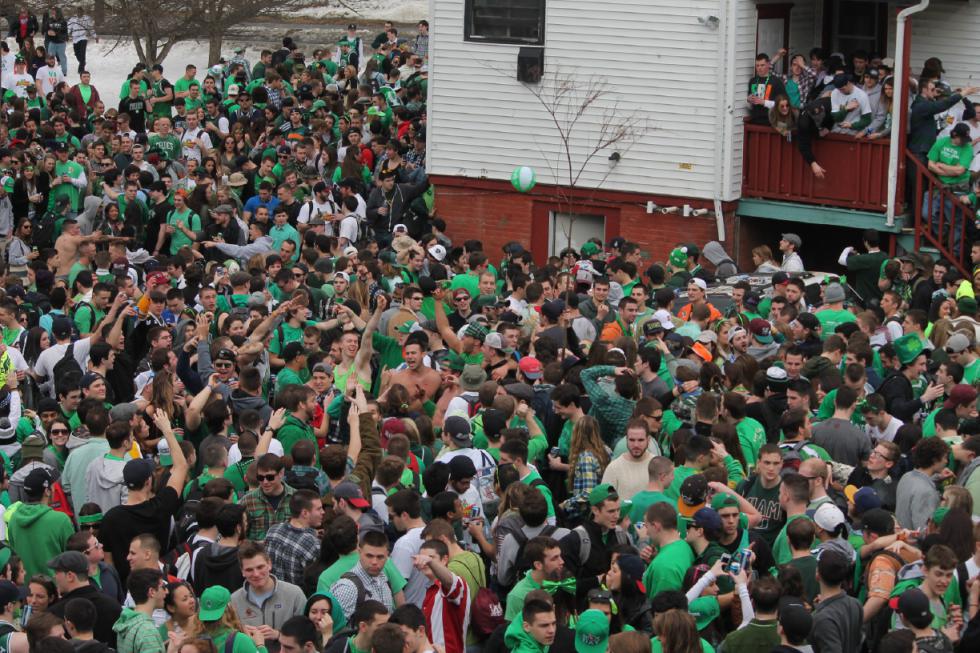 Last year, social media platforms such as Twitter and Instagram led Blarney Blowout revelers from one epic bash to another, leaving destruction and empty beer cans in their wake.
Social media has changed the way the masses gather. Real-time tweets enable wandering revelers to unite under common hashtags.
“It was like an amoeba, like a huge school of drunk fish,” UMass senior Brad Finn says of the crowd that formed during Blarney festivities last year. Last year’s Blarney Blowout — the unsanctioned pre-St. Patrick’s Day celebration in Amherst that marks the first Saturday of spring break — ended in clashes between police and partiers with 55 arrests, 28 additional court summonses, property destruction, and a slew of minor injuries. Though the mayhem snowballed from the townhouses, a collection of off campus apartment complexes, many of the partiers had migrated there from UMass dorms.
This year, the online players have changed. While there are still plenty of people talking about Blarney Blowout on Twitter and Facebook, students are increasingly learning about where the best parties are on Yik-Yak, Fade, and GroupMe.
And the posts are showing up earlier than last year.
Posts promoting massive shoveling operations leading into this weekend’s Blarney festivities have already begun circulating social media spheres, after towering snowbanks hemmed in revelers and set the stage for conflicts with cops last year. “It’s going to have to be a cleared space — it won’t be like last year. People are going to seek out the pavement,” says Finn.
“I’m hearing about it earlier than I did last year,” says UMass sophomore Jeff Babbitt, 20, taking a break from studying for an anatomy exam outside the Blue Wall in the Campus Center. “I’m going to avoid it. I’m not trying to get pepper sprayed.”

In previous years, Amherst bars promoted the pre-St. Patrick’s Day festivities via social media, but Town Manager John Musante says “those days are over.” Town officials are determined to keep college students’ objectionable behaviors from deterring other shoppers and diners. Donald Courtemanche, executive director of the Amherst Area Chamber of Commerce, says efforts to remove Blarney Blowout “branding” from the lexicon will help keep the day more “safe and responsible.”

Some students interviewed on campus say they missed the chaos last year and aren’t eager to find it this weekend. “Last year I didn’t hear about it until after it happened,” says Jason Robichaud, 24, sitting at a table inside the Blue Wall. The culture is different in Sylvan, an on-campus dorm, he and his friends agree — the students who live in Southwest are more party prone. Sylvan residents tend to be more introverted, they say. “I don’t think there should be a day to get fucked up — you should get fucked up when you want to get fucked up,” says Robichaud. “I don’t get kids these days.” Friend Jack Turner, a freshman, says he probably won’t go out looking for Blarney, but if Blarney finds him, he’ll “go hard.”
Amherst Police Chief Scott Livingstone says the department has been working hard to ensure the weekend goes smoothly and he’ll be happy when it’s over. He has an officer working full-time to scour social media in search of red flags. If they find posts suggesting a gathering, Livingstone says officers are responding with warnings that remind users of the consequences for their actions.
“We’re all hoping for a better Blarney — actually I hate to call it Blarney — weekend prior to spring break,” says Livingstone. “Something better than we had last year. We’re hoping for a good day.”
Double-edged sword
Nikki Bianchi, 21, says the social media hype is just getting started. She says it’s been a long winter and people are excited to get out and have some fun. Bianchi, who lives in Puffton, says the administration’s attempts to thwart the debauchery will likely incite more of the rowdy behavior.
“I think Blarney is a good way to celebrate the coming of spring,” she says. “They should allow us the space to celebrate together and tell us to leave after an hour or so, like at the tailgate parties. We’re not a bunch of maniacs, we’re just trying to enjoy our college career.”
Yik-Yak is an app that gathers users anonymously from a geographic area into one stream, and Fade unites users by school using university email accounts. Groupme, a group-texting platform students say helped bring the crowds together last year, allows users to quickly send a text to thousands of their  contacts.
However, social media can prove a double-edged sword for the people throwing the parties. Alerting people via social media that there will be a bash gets the word out fast to invitees, but then the post gets shared and everyone and their dog knows about the party.
Finn, 21, sits playing chess with friends on the top floor of the Alpha Tau Gamma house. He says the simple words, “party at ATG,” broadcasted through social media platforms like Twitter, Yik-Yak, and Fade can draw large and unwanted crowds to the house.
The source of the post doesn’t matter, he and his friends say. People see the post and assume that it’s true because they want it to be true.
“We’ve gotten screwed by Yik-Yak,” says Finn, who lived in the large fraternity house last year, but now lives in an apartment in North Amherst.
“For Blarney we’re asking people to steer clear,” says fraternity president Levi Lilly. (Lilly is a cousin to Advocate reporter Amanda Drane).
Last fall FinnaRageTV used social media to draw attention to a house party the company was throwing during Keene’s Pumpkin Festival, but founder Trevor Finney says FinnaRage has learned its lesson. Finney says the Boston-based “party TV” operation has moved from hosting and filming parties at private houses to clubs.
Finney said it wasn’t their intention to add to the pandemonium in Keene. Asked if he and his crew will be around for Blarney weekend in Amherst, he said, “We wish. We’re planning on staying away from there. Gonna be a mess like always.”
To say Blarney Blowout 2014 got out Tom Beatonof hand is an understatement. Donning riot gear and dousing crowds with pepper spray, Amherst Police officers met the revelers with force, further inciting the drunken throngs. An in-depth report issued in September by former Boston Police Commissioner Ed Davis found police response and university prevention lacking. The report, ordered by the university at a cost of $160,000, is already prompting a slew of preventive measures that may or may not quell the madness this coming March 7.
UMass is putting on a daytime concert — starting at 11 a.m. and featuring Kesha and Juicy J, according to Amherst Wire — in hopes of tamping down the crazy. The university is also disallowing outside visitors in the dorms between Thursday and Sunday evening, and restricting parking on campus.
“I think the administration is doing everything they can to keep it from getting big, but all that does is inspire kids to make it bigger,” says Bianchi.
“It was a really fun day until it went bad. I think people got scared because they felt like they were being controlled. The riot gear and the pepper spray made them feel like they were doing something wrong. When people get scared they act in negative ways,” Bianchi says, adding that the university’s weekend ban on outside guests will only mean visitors won’t have a safe place to go.
UMass senior Jen Ellis says that during last year’s Blarney festivities, she was already in New Orleans for an alternative spring break trip performing community service. This year, she says, her group is short on funds so they will be selling their wares on Sunset Avenue on March 7 — before they take off for their trip. They hope to capitalize on partiers’ drunken munchies by selling Krispy Kremes for a good cause. Ellis says she isn’t interested in participating in the madness, but they can still squeeze some good out of it. “The media just blows it out of proportion and it adds to UMass’s reputation as a party school,” Ellis says.•
Amanda Drane can be contacted at adrane@valleyadvocate.com.