Ellen Meeropol dreamt up a horror. She took a charged anniversary, September 11th, a remote island in Maine, and an assortment of characters whose agendas are at odds (at the most polite best), but she doesn’t go for “at best” in her second novel, On Hurricane Island, just published this week by Red Hen Press. The place where politics and people meet intrigues Meeropol. The place where secrets find daylight also intrigues her—and her novel places her characters in theses places—and strands them, quite literally. Far from “at best,” she veers into “worst case scenario” territory.

In real life, unreal tragedy fueled by politics informed Meeropol’s husband’s childhood. A son of Julius and Ethel Rosenberg and founder of the Rosenberg Fund for Children, Meeropol’s family’s life revolves in some fundamental way around questions of what happens after a politically charged horror, and how to use inevitable disbelief to fashion a legacy of hope. As citizens, the Meeropol family lead by example; as a writer, Ellen Meeropol refuses to let her readers off the hook—of facing what seems unfathomable. She also refuses to give up on her characters; from the depths of crisis, she envisions growth.

I didn’t expect to find myself reading a page-turner, but that’s really what the novel is—and aspires to be. The novel forces us to contemplate things we’d rather not think could be true, and wonder. The characters’ development occurs more slowly than the action, and even slows the action. At times, I wanted to hurry through character back to action, because I was anxious about what would happen next. On Hurricane Island is an anxious read I didn’t regret. The novel’s stark but clear setting rose to character status, and its very cinematic descriptions of action were clear enough to watch events unfold. That’s to say I found myself casting the movie in my head; I think you will, too. 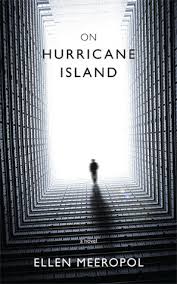