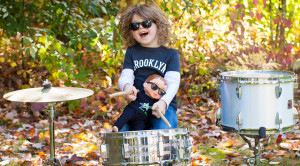 One thing that I found especially shocking when I became a first-time mama to a boy was the assumption that boys are genetically programmed to like trucks and balls and big creatures like dinosaurs.

Some boys adore all of the above. Some don’t.

The fact that my hip, politically progressive friends were in agreement with gender stereotypes surprised me, to say the least and disappointed me, to say this politely.

I was nothing short of offended by big box toy stores (and clothing stores, for that matter). The glaring pink and blue aisles touted incredibly segregated sensibilities: boys like football and big machines; girls like dolls and princesses and vacuum cleaners. That’s it. There was no sense of possibility for a pink truck or a male doll, save for superhero or G.I. Joe. You had to be all in the boy or all in the girl, in big air quotes on boy and girl.

However bad it was when my eldest, now nineteen, was small, it continued to get worse. Things that had been gender neutral, like tricycles or soccer balls, morphed into primary colors and pastels, so that they, too, became gendered.

Offended parents are a renewable resource and I’m very glad to say that one of mine—Laurel Wider, a psychologist and mother to a small boy, who lives in Florence—did more than be offended or be offended and write about it, she launched into action.

Her action is called Wonder Crew. I totally supported it and I think, if you are even a smidge offended or better yet, charmed by her aspiration to offer boys a real pal (and you know, all the things about a pal, like you care for your friends, even if you don’t diaper them) you’ll support her Kickstarter, too.