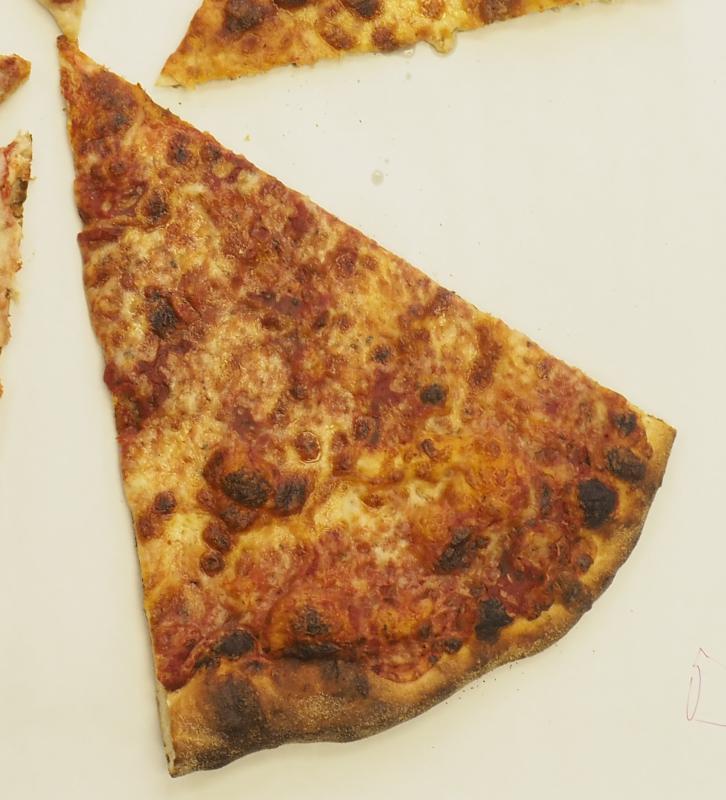 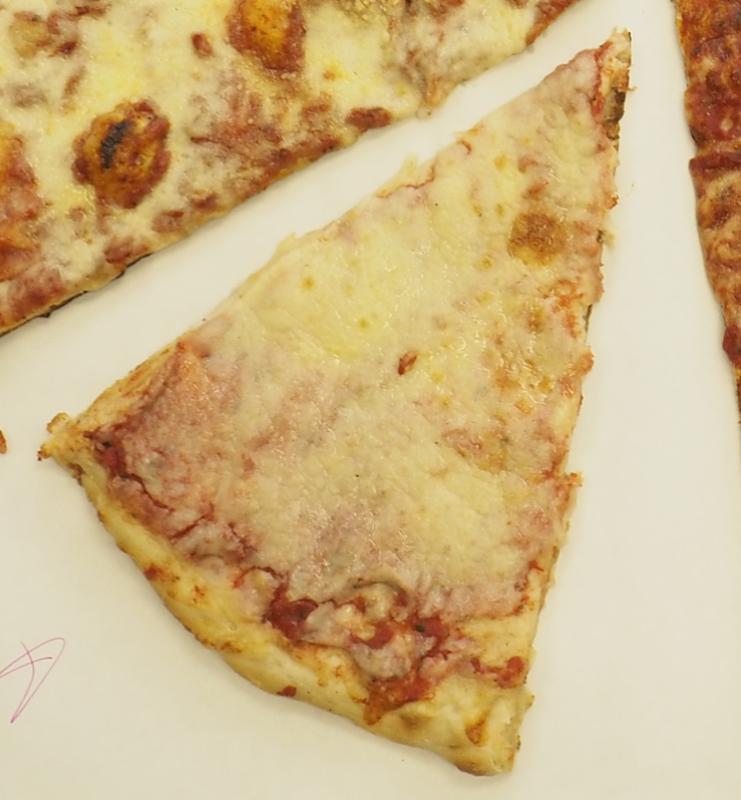 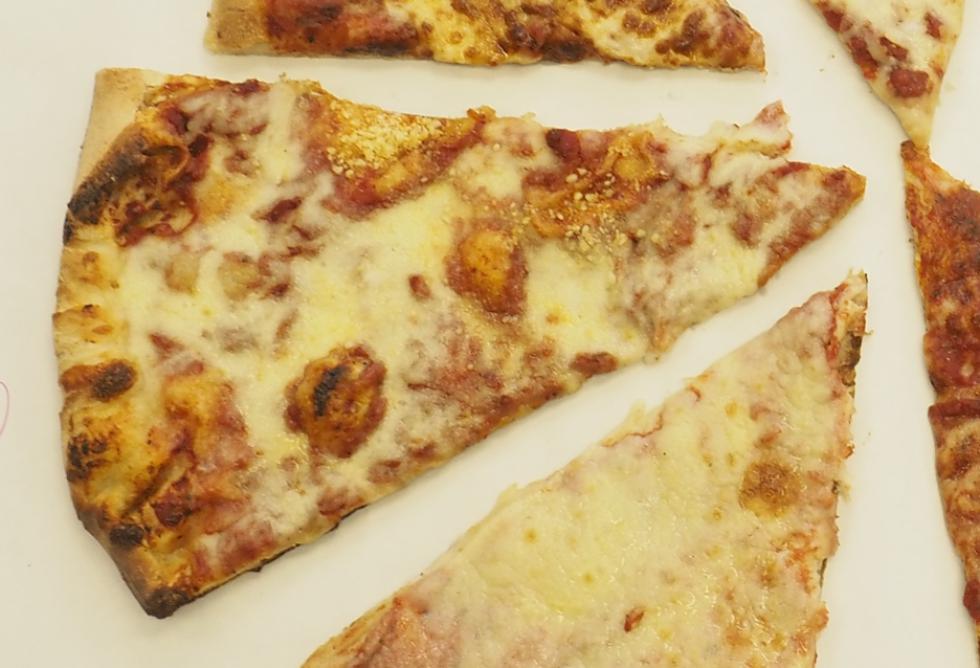 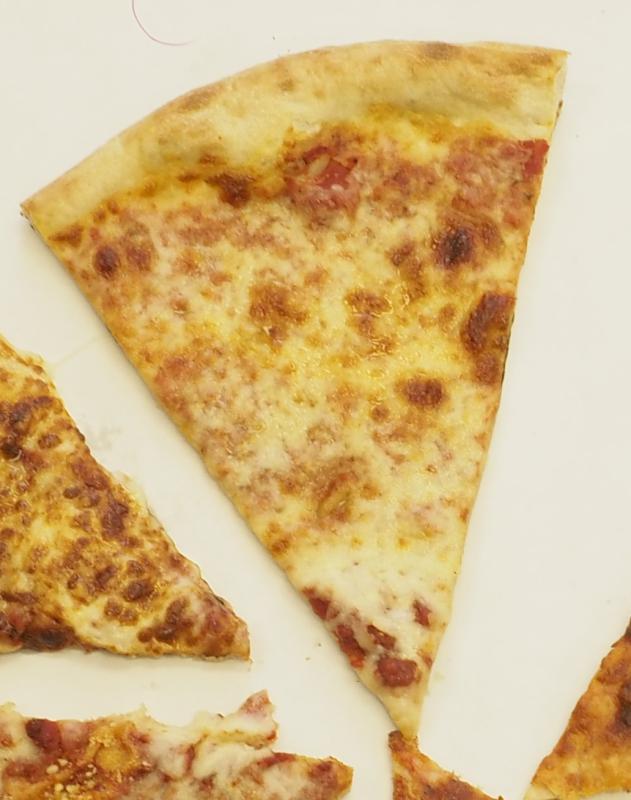 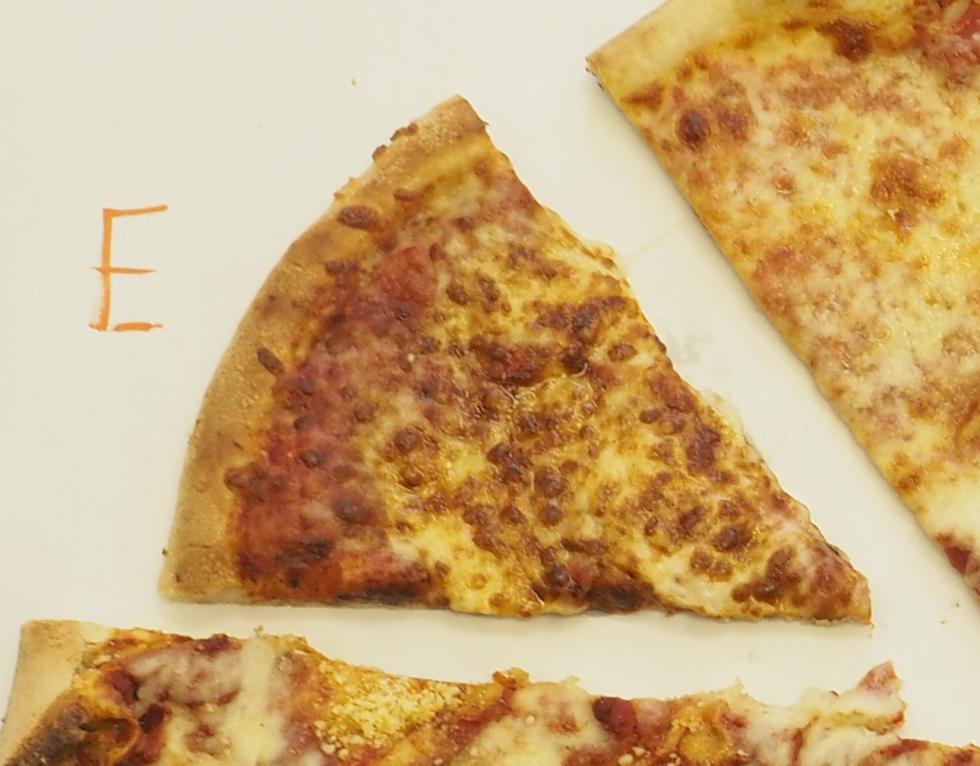 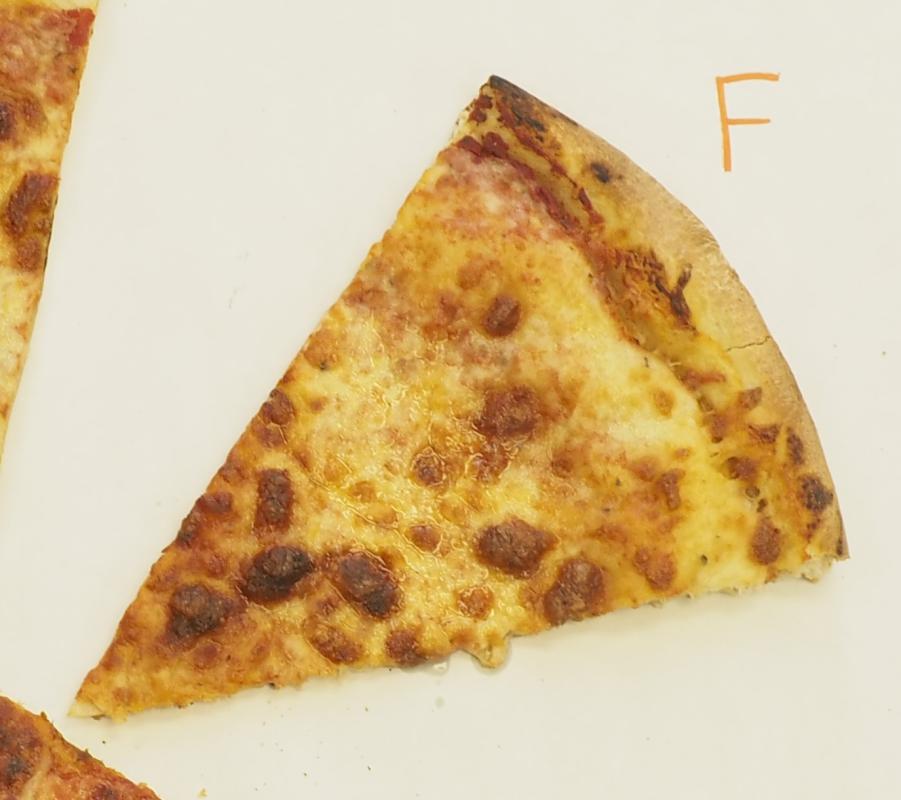 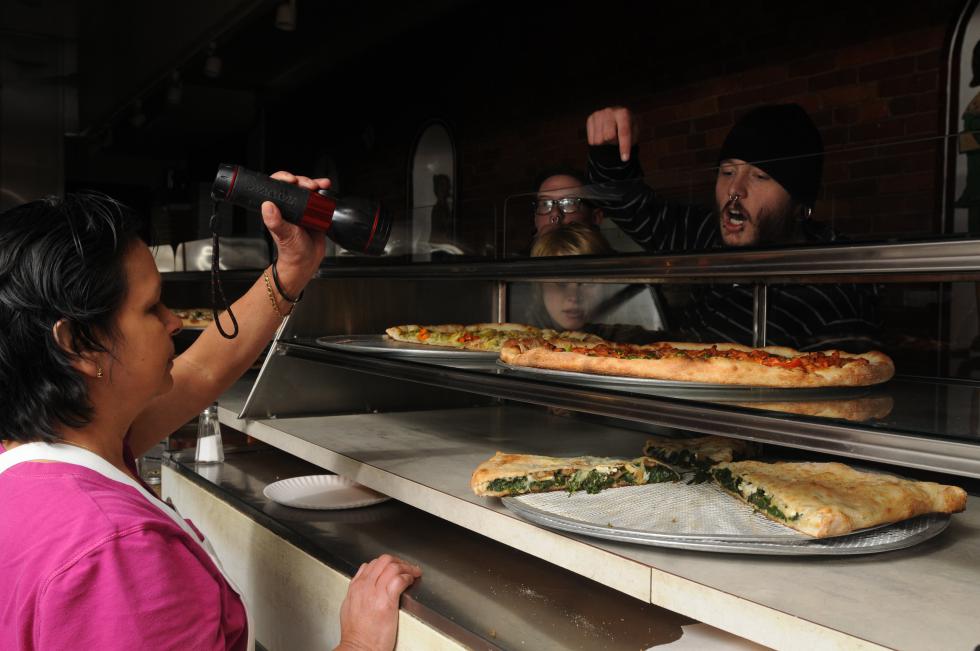 Anna Romaro shines a flashlight on the pizza options so customers can choose slices at Pinnocchio's on Main Street in Northampton, where pizza was made Sunday despite the power outage. CAROL LOLLIS

Pizza — it’s as American as, well, burritos and frankenfurters. Determining what’s the best pizza is a heady, touchy business. And in an area where there’s a pizza joint every 50 feet or so, the stakes are high. For something that is, at its most elemental, just cheese, sauce, and crust, pizza is also subject to plenty of variations. Some of them are variations that aren’t necessarily obvious — what makes (an American) pizza “Greek” or “Italian,” anyway?

That means there’s only one way to find out what qualifies as top-shelf pizza in the Valley: eat slices from Greenfield to Springfield. It’s tough work, but somebody has to keep Maalox in business. Below you’ll find the results from installment one of the Advocate’s Great Pizza Taste-Off. We tried to bring some order to the cheesy chaos by setting some ground rules. First, we only visited places that sell pizza by the slice. Otherwise, we’d be at this for a decade. Second, we only tasted cheese pizza. It’s pizza at its simplest, and it’s the best way to reveal shortcomings in the pizzamaker’s art — nowhere else is the sauce so naked, the crust so exposed. If all the elements work together well, throwing some toppings on just launches a proper pie into the stratosphere.

Our first round examines six by-the-slice pizza places in Northampton. The Great Taste-Off is an endeavor that will, necessarily or sometimes accidentally, skip a place or two in the interest of covering a representative sampling of a big Valley. This installment misses two often-cited Northampton area pizza destinations, Hungry Ghost Bread and Bread Euphoria. That’s because those two spots, last year, had their own extensive head-to-head treatment.

In future installments, we’ll taste slices from other locations. After we’ve flopped a lip over pizza from most of the places in the Valley, we’ll close the box on our taste challenge with a match-up of the big winners from each location. At the end, we’ll have at least some notion of what’s the best slice in the Valley.

Even then, the argument won’t end. If anything is clear after round one, it’s that pizza is polarizing stuff.

Our tasters — staff writers Amanda Drane and Hunter Styles, editors Kristin Palpini and James Heflin, production manager Jennifer Levesque, and online editor Micky Bedell — never proved united in their pizza passions. In an unexpected turn, our Northampton winner came out on top by getting reliably middle-of-the-road ratings. Others nearly inspired fisticuffs, but their scores were hampered by the extremity of the love and hate with which they were gnoshed. If the scant remains of our Taste-Off are an indication, it’s also clear that even “bad” pizza is still pizza and therefore pretty good — the top and bottom scores of our spectrum of contenders were only separated by .34 on a 1 (yuck) to 5 (yum) scale.

Filos’ slice had a scattering of Parmesan on top, and got noted for its sweet sauce. Though it came in at the bottom, all the plates got emptied.

Jennifer: I liked this sauce best, and I liked that you could see Parm on top.

Hunter: This one had flavorful sauce, a bit sweet. The crust was a bit dry — not delicious, crunchy dry, but dry-mouth dry.

Micky: The sauce was way too sweet. I got a super-patchy Parmesan part. I got confused by this one.

Kristin: Parmesan is no substitute for other cheese. The sauce was sweet, and the crust was burnt and tasteless.

Amanda: I enjoyed it. I thought sauce had some zing, and I appreciated the salty Parm sprinkle for flavor and texture. There was a slight crispness to the cheese on top.

Sam’s pizza was notable for its cheesiness and its saltiness, though it didn’t inspire a lot of drama.

James: Salty, extra cheesy. Sauce present but only a note. Crust is floury, nothing unusual, but there are parts where crust is crispy and really flavorful.

Amanda: A little salty — maybe feta or asiago in the mix? Sauce was good, but I could have stood more of it. The crust was doughy. This was a solid slice.

Kristin: Pale, but surprisingly tasty. The cheese blend was spot-on, a little sharp.

Micky: This was really chewy. The crust was nonexistent, flat.

Florence Pizza’s slices were the smallest of the bunch, but were noted across the board for the greasy, action-packed flavors in those small packages.

James: If this was any saucier it would be Dita von Teese.

Kristin: My favorite. Glistening with grease. It smelled so good. Crispy, bubbly cheesy. Left a nice greasy spot on the plate. This is the kind of pizza that makes helping your friend move worthwhile.

Amanda: The sauce tasted sugary more than the others. But enough garlic was in there, so that was cool. Cheese was nicely browned and caramelized. Nice, crisp crust. Tasted a little too processed somehow. Premade crust? Processed cheese? Maybe it was just the grease factor.

Jennifer: Reminds me of the Saturday night “cardboard pizza” I would have with my dad when I was a kid. I’ll eat it, but it wasn’t the greatest.

Hunter: This one was cheese-forward. There was something comforting about how homogenous it was. Grease is good. Crust was kind of uninteresting, but the cheese made up for it.

Pizza Amore did inspire some major amore among our tasters. But it proved too polarizing to pull off a win, despite an oft-praised crust.

Micky: If I could marry a pizza, I’d marry this one. The sauce was light, and the crust was really flavorful. Only thing that was missing was that the cheese was kind of “whatever.”

Kristin: The crust was like French bread. That’s okay, but not what I want on my pizza.

Amanda: It tasted like a grilled cheese. Crust tasted a little stale. Meh.

Jennifer: I liked this crust the best — crispy outside, soft inside. There was almost no sauce — I think of pizza as a little bit messy, and this wasn’t really.

Hunter: Reminds me of a grilled cheese, too. Not just because of lack of sauce, which doesn’t bother me on principle, but also because the crust was really buttery. Borderline not cheese pizza.

James: Yeasty, awesome crust. This is the pizza from which they extract “pizza flavor” to use in other things. The crust puts it over the top for me. It’s a perfect marriage of elements.

Mimmo’s, our second place winner, famously serves a slice so big it’s been called a “kite of pizza.” It scored big, too, but its polarizing nature kept it a mere .09 points from our winner.

Jennifer: Hello Mr. Huge, I am not a fan of you. Too much rosemary.

James: A lot of sauce. The crust was burnt and a little tough. Very frank pizza, like an overbearing aunt.

Hunter: This one hit some of my key requirements. It was big. it was the most complexly flavored of the group. Doesn’t lead with cheese taste, but crust and sauce. Each bite is a little different. It’s like my mouth is on a trek through the pizza wilderness.

Micky: Okay. Different — like everyone was competing in one category, then this one was off on its own. Didn’t belong. It was really saucy and flavorful, but I hated the crust.

Kristin: Late-night pizza as it should be — thin, crispy, top is brown and bubbly. The crust is just-right, chewy.

Our winner — by a nose — satisfied everyone.

Amanda: The sauce could have used more spice, more flavor. Good color, good cheese. The crust was airy and crisp.

Kristin: Had a nice oregano flavor, but the cheese was bland. Not enough sauce. Reminded me of when I was a kid and there was that pizza at the skating rink that would be under the heat lamp forever.

Micky: My second-place pizza. I don’t really like sauce — I like cheese and crust. I thought the cheese was awesome, but that may be because I grew up on Domino’s.

James: There were some spices in evidence in the sauce, but the cheese was a little plain. The crust tastes nicely browned, and the outside part of the crust is bready.

Hunter: Made me nostalgic for my fifth grade birthday. This was somehow bright-tasting. Pizza to order when you’re sad. It had a ballsy amount of rosemary. Maybe I’m having a stroke.

Jennifer: The Prozac pizza! I loved it.•