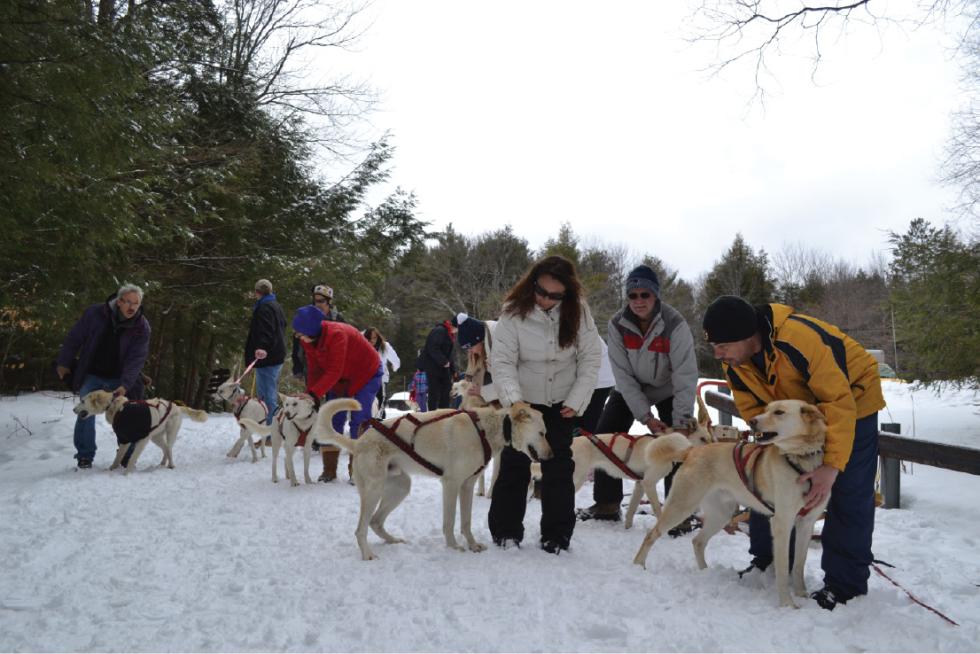 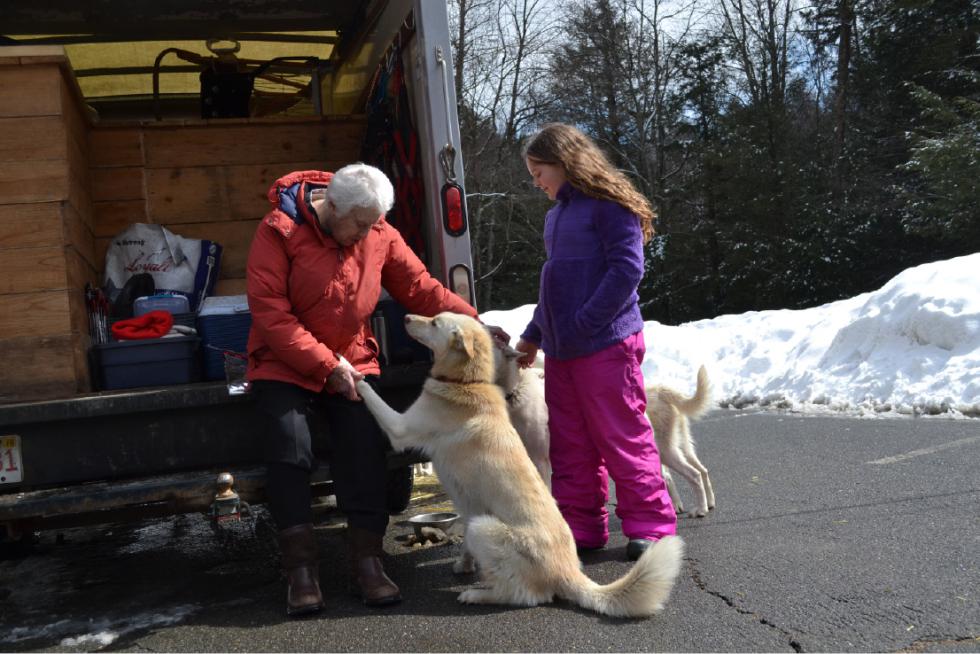 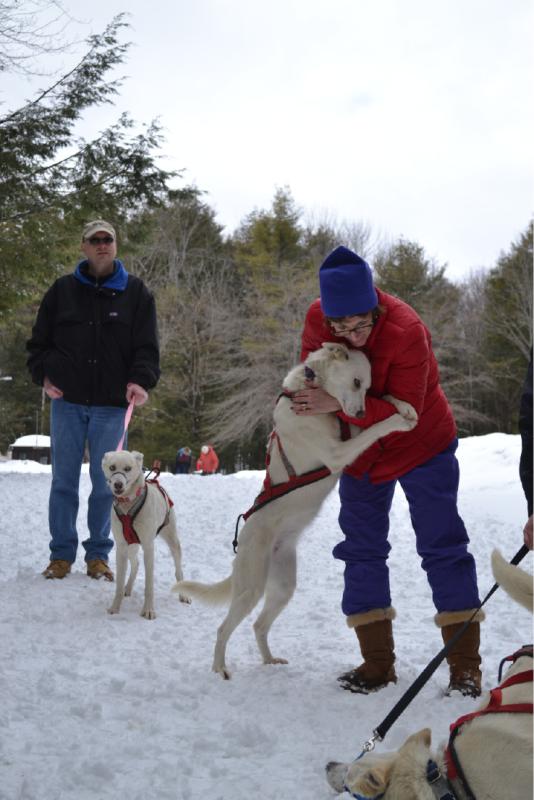 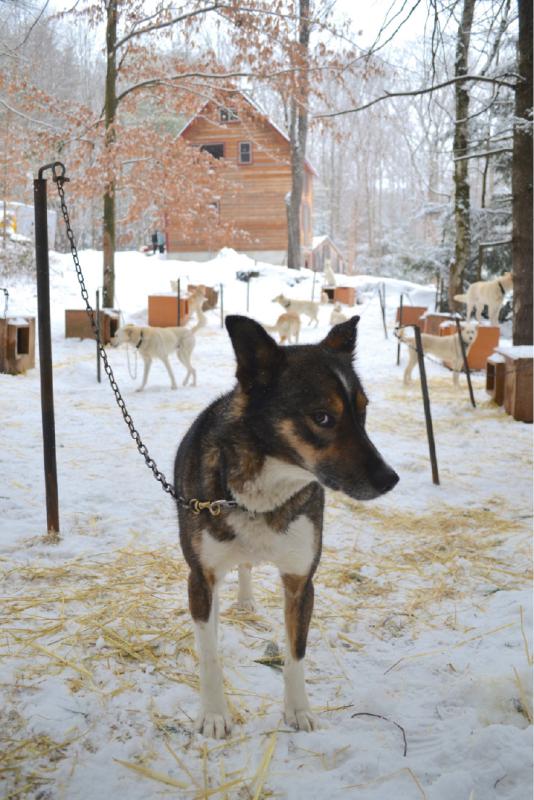 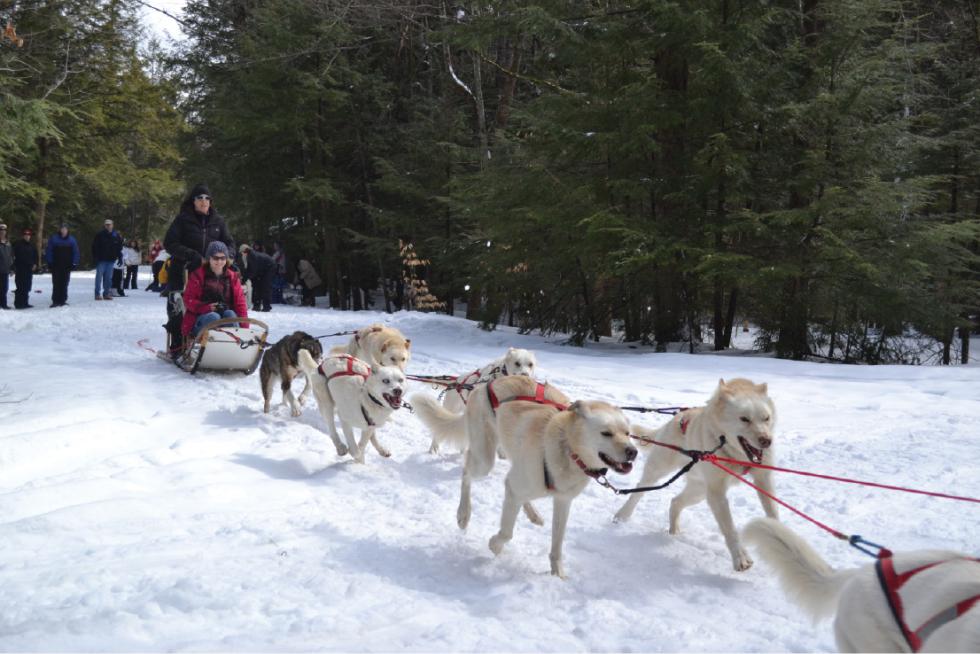 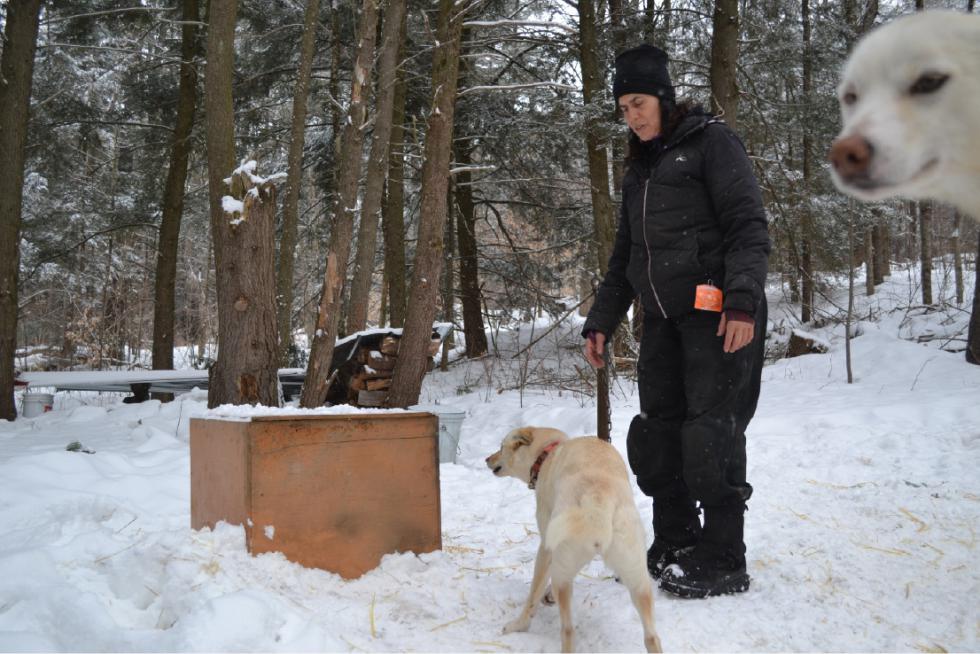 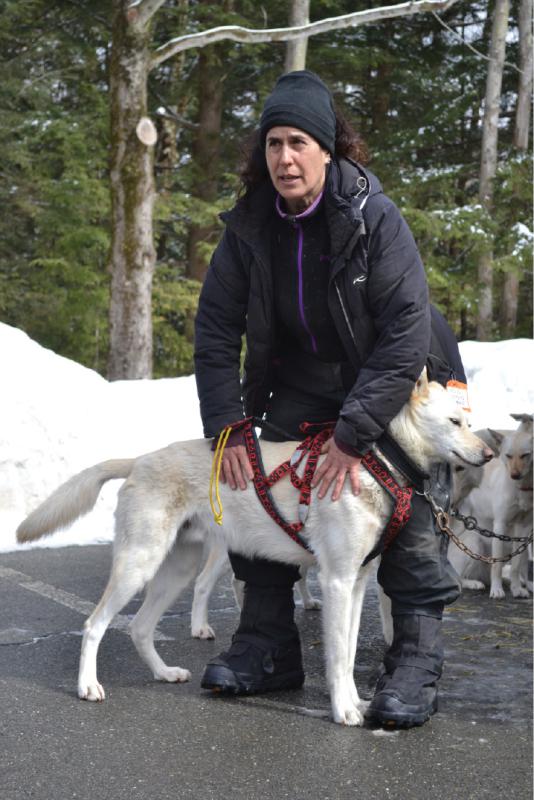 Marla Brodsky’s boots crunch on the snowy path. In the dog yard behind her house, 18 pairs of ears perk up at the sound. As she approaches, her four litters of Alaskan Husky sled dogs start to stir. Some dogs lift their heads and howl. Some strain at their leashes. Some avert their eyes, looking bashful. Others lie on top of their small wooden houses, quietly resting.

An untrained eye would have trouble telling these canines apart — with the exception of one, the dogs here are all white, and all related — but spend a few minutes in their company, and their characters start to shine through.

No one knows this better than Brodsky. She introduces me to Rosie, Roxie, Rollo, Raz, and Runt, to Speck, Spunk, Sigh Guy, and Sweetie Pie, to Taffy, Trixie, Tundra, and Tootsie, to Tra La La, Topaz, Una, and Ulu Jr., and to that mysterious dark adopted one: Hunter.

Brodsky steps among the dog houses, and the animals knock their bodies eagerly against her legs. This is a tight-knit competitive racing team: they treat Brodsky as the alpha, and she gives them love, protein-rich food, and lots and lots of exercise.

Brodsky introduces Rosie first — “She takes tight turns, like a herd dog… See how little she is?” — then makes the morning rounds to say her hellos. Runt licks her hand. “His great-grandmother was one-quarter wolf,” she tells me. “That’s where his golden eyes come from.” She looks around at all the lively faces. “Raz’s great-grandfather was all Siberian, so he’s the biggest, and he’s got the thickest coat… Spunk, my sprint man, he’s lean and muscular. He’s all business… In Speck, you can see the greyhound. See how long he is? He just runs like the wind … Tra La La, he’s the calmest of his litter. He reminds me of my old Malamute …”

In earlier lives, Brodsky worked as a drama teacher, a blues singer, and a tae kwon do instructor. When she took a trip to Alaska about eight years ago, a passion for dogsledding took root. Three years ago, she bought this 18-acre wooded property, which sits above Mount Road in West Chesterfield, and opened a touring and racing kennel.

Now she makes a living by mushing, racing, and touring her sled dogs, as well as hosting programs and camps on this property in the summer months: hiking, biking, outdoor survival, sled dog summer camps, and a form of dog racing called dryland mushing, which uses wheeled carts instead of sleds. All of these programs are produced by the company she runs: Hilltown Wilderness Adventures.

Brodsky also found time this winter to take her dogs on two 100-mile races in Minnesota and Canada, as well as a 250-mile race in Maine that serves as a qualifier for the Iditarod, the famous Alaskan sled dog race held annually in March. Her team did not qualify this time, but since none of her dogs are over six years old, Brodsky expects she has another two or three years to make it.

“I want to do races where I’m going day and night,” she says. “I want to take care of myself and my dogs in all the elements. That’s my dream.”

Nothing in Brodsky’s life, including skiing and martial arts, touches the thrill she gets from dogsledding. “You’re on two runners. Nothing is strapped in, and you’re propelled by dog power. You have to hone your reflexes, but add in ice, snow, wind, and the instincts of multiple dogs… You could run the same race every day and it would be completely different each time.”

Some of these points will come up later today at the DAR State Forest in Goshen, where Brodsky teaches weekend lessons on mushing to groups of paid customers, who find her online through the discount websites LivingSocial and Travel Zoo. Before that happens, though, the dogs need to be fed, and the solid waste from their yard needs to be scooped and composted.

For that, Brodsky has some help: two teenage volunteers, a 23-year-old handler named Sara Mustari, who lives in a separate cabin on the property, and Brodsky’s 10-year-old daughter Ruby.

After the dogs have eaten their kibble, the group moves each dog, one by one, into crates inside the large Hilltown Wilderness Adventures moving truck. The crates, padded with straw and built into the walls of the truck, have small metal-barred doors that allow for the sights, smells, and fresh air from the road to flow in freely.

Once they realize it’s time to get on the road, the dogs start to bark. This is a breed hard-wired to run, run, run, and most of them, once unclipped from their leashes but gripped by their collars, kick off so powerfully with their back legs that they hop upright and prance forward toward the truck, pulling their handlers along, like a circus act.

Amazingly, once every dog is loaded into the truck, silence fills the yard. It’s because the pack is so in sync, says Ruby. She explains that a similar thing happens once the teams are harnessed to the sleds, right before a race starts. “They’re all barking. It’s really chaotic.”

“They’re psyching each other up” says Mustari. “Then when they all take off running, it’s peaceful again.”

Deep in the woods at the state park that afternoon, the ground shoots past under the runners of a fast-moving dogsled. I’m seated on the sled, watching the shifting, powerful legs and backs of the eight dogs harnessed in front of me. Behind me on the sled stands Brodsky. If we need to turn left, she yells “Gee!” and for right turns she yells: “Haw!”

The snow is hard-packed and bumpy in spots. But our engine is hot, well-oiled Alaskan Husky muscle, and the ride is fleet-footed and smooth. Anyone who has ridden horses knows this feeling: the reliance on the force of another animal; a velocity that is not your own. This is danger at its most trusting.

Two more dogsleds follow close behind us, each with a first-day rider at the helm. The 18 people attending Brodsky’s class today have been taking turns on these rides, which loop around a portion of Upper Highland Lake. Some riders look nervous, others confident, but it seems a testament to Brodsky’s teaching skills that no one has gone flying off into the trees today.

That 90-minute opening lesson, which Brodsky taught in the main parking lot, offered a crash course in not crashing. Keep your knees bent and your elbows in, she said. Don’t lean with your body — it’s all in your hips. On an uphill stretch, you may have to kick off a few times, like you’re on a skateboard. But when you’re going downhill, step on the drag pad. For a full stop, use the bar brake. Then, when you’re ready to get off, make sure the snow hook is planted first.

The customers nod with furrowed brows. The learning curve seems a bit steep for some, which is why Brodsky circles the group nonstop, watching for trouble or confusion.

The lesson and subsequent rides last for four hours. Now we’re on our way back to Brodsky’s truck, where these calorie-burning pooches will get a rich reward: chunks of cow and pig organ meat donated from a local sponsoring butcher’s shop.

Brodsky asks me whether I’ve had fun. I say yes, and that I’ve heard good things from her guests. I talked with Amy Bryson from Haverhill, who was given today’s pass as a Christmas gift, and who told me that she was curious to try mushing because she had thought that it was “just an Alaskan thing.” Mary Pat, from Northampton, told me that she delighted in the dogs’ ability to run so smoothly together, and that the state park in the afternoon weather was “wonderfully peaceful.” Karen Colby, from Linfield, who brought her husband and two college-bound daughters, said she was happy to find such an unusual means of getting the family out to do something all together.

Hunter Styles can be contacted at hstyles@valleyadvocate.com.