Scene Here: Over King Street and Through the Woods 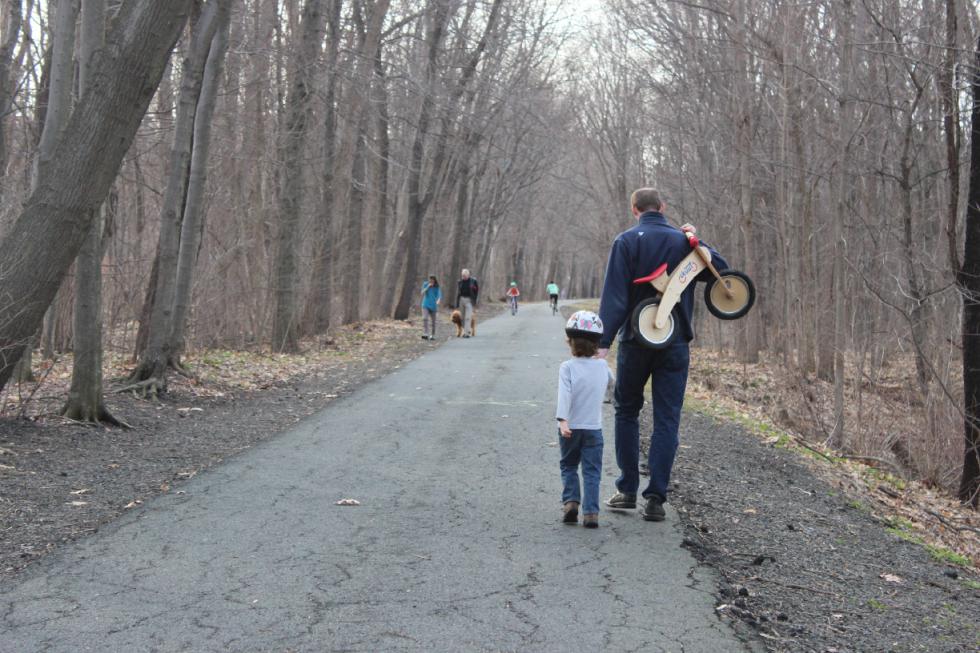 Two or three lonely shopping carts litter the entrance to the Northampton-to-Leeds section of the bikepath. I’m sitting on a stone marking the entrance to the path taking notes when a 50-something man named Peter meanders my way.
“Does your name start with an ‘A’?” he asks.
It does. “Are you psychic?”
He shrugs and asks if I’m going to take photos of the trees. Not today.
“There’s a lot of cool trees along the path, windy-like. They go great in black and white,” he offers before launching into a reflection on how runoff from neighboring parking lots is destroying a pond up the path. The talk seems to upset him and he walks away wordlessly, with a forlorn expression.
Tiny birds flit across the path, flying so low their wings graze the pavement, chirping as they go. Squirrels, fearless of the passing humans, rustle in the leaves along the path. Green leaves, like artichokes, poke up through brown mini-swamps beside the trail. Peepers, river frogs in the neighboring waters, sing the sweet songs of spring, keeping time for the many feet and wheels hitting the path’s pavement.
Red-faced, shiny bikers grit their teeth, their wheels clattering as they zoom by. A little girl skips a little rope as she exits the path onto State Street, her mother in tow. Runners’ rubber soles grind dirt and pebbles into pavement.
“Do you have a cigarette?” a biker wearing khaki shorts and red boxers yells to me from his bike. I shake my head. “That’s probably a good thing,” he says, continuing on his way.
Another biker teeters from side to side, hands-free wheeling as he scrolls on his smartphone. Out-of-shape joggers take what is likely their first run of the season, their faces flushed with exertion and their pace slowed to a crawl. Two pre-teens race each other on bikes, leaving their father and younger brother in their dust. The father calmly scoops up the young boy’s tricycle and takes his hand.
“We have to keep up with them,” he says.
Another father rockets along with a baby in a stroller. A mother on a double bike with her toddler strapped to the back veers around me.
Across the road, the trail continues, but not before a jarring reality check as bikers and joggers hit King Street — one of the busiest roads in town. They wince at the sight of it as they come around the bend, where a Taco Bell and the roar of traffic awaits. It’s a far cry from the quiet, wooded trail they’ve been traveling.
Big box stores line the strip and cars on the packed streets go by at a fast clip. A jogger, fresh from the bend, heads towards the crosswalk that connects the two paths. With squinted eyes, he presses the crosswalk button. His loose, gray T-shirt and running pants wave with the breeze from the cars whizzing by.
A future underpass slated for completion next year will cut this break in rhythm for many joggers and bicyclists.
Through the crosswalk and into the path’s entrance across the street, it’s back to sylvan heaven, yet the shopping carts, the muffled roar of traffic, and the rear ends of large stores stand as reminders of the realities beyond the sheltered path.•