Scene Here: For Love or Baseball? 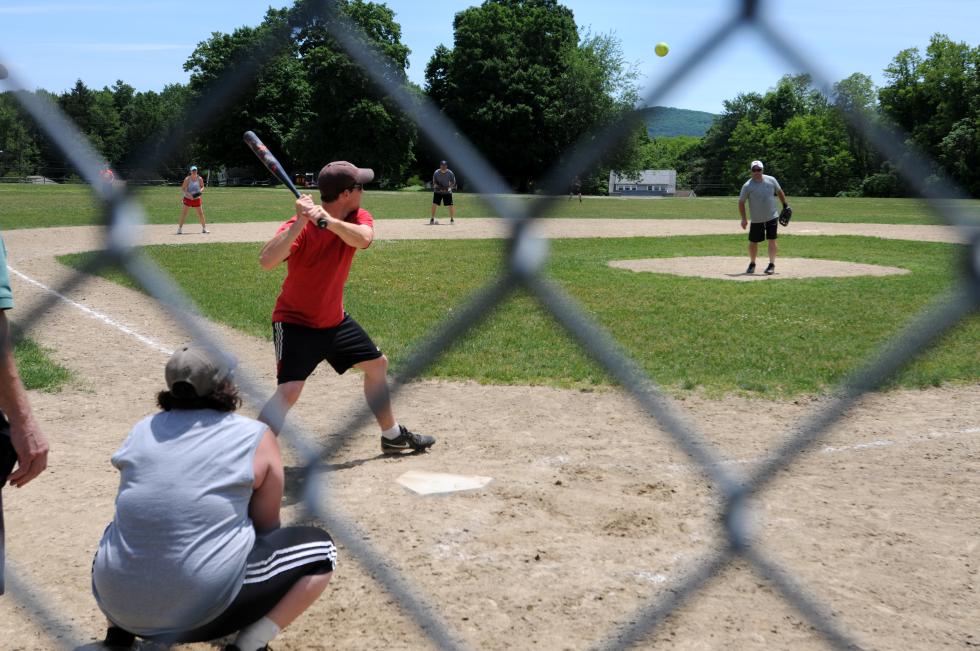 Alfred, Lord Tennyson, said in his poem “Locksley Hall” that in springtime a young man’s fancy turns to thoughts of love.

I’m long past remembering almost anything about being a young man; but I do know that in this springtime, the first in my retirement from the world of paid labor, my thoughts turned to baseball. Specifically, I wondered if there was a local softball team that would take on a player whose spirit is willing, even eager, but whose aging flesh is weak.

The answer, from the Northampton Recreation Department, was yes. In response to my emailed query I was hooked up with a coed team, which sounded about right for what I imagined my skill level to be. I wasn’t sure because the last time I took the field was nearly 20 years ago, when I was a member of a Chicopee team that played a double-header every Sunday morning. Such an effort was now out of the question and I had the nagging suspicion that my desire was greater — possibly ludicrously so — than my ability. Charging heedlessly ahead was the surest way to find out.

I have always worshiped at the church of baseball, as defined in the 1988 movie Bull Durham, mainly because it takes more than brute strength — grace, finesse, agility and coordination, for example — to excel. I used to have some of those qualities, at least in a baseball sense, and I looked forward to seeing what I could still do, on the Northampton Rec Department’s fields of dreams.

I was prepared for failure. But if I could no longer do the three simple things that are the essentials of baseball — catch the ball, throw the ball, hit the ball — I figured I could at least take pleasure in watching others turn a double play, smack a line drive or gun out a base runner. I was ready, if necessary, to let admiration replace participation.

My team’s first practice was in Hadley at the Young Men’s Club, an unfortunate name that I felt heartlessly mocked my comeback attempt. I showed up early and did a little stretching, jogged a bit and generally loosened up while trying not to pull, rip, tear, dislocate, break, strain or sprain anything. Playing well requires concentration — 90 percent of baseball is mental and the other half is physical, as Hall of Famer Yogi Berra famously said — and while playing in the field I mapped out in my head, before each pitch, what I would do if the ball was hit to me, which of course depended on the situation. This saved me from the confusion, false starts and routine gaffes that are a part of my daily life and gave me the appearance of competence — I hoped. When practice ended I was still intact and no longer felt that I was out of my league. I was ready to play ball.

The season is off to a fine start. My team, Home Improvement, has lost only one of its first six games. We have fun, which is what’s important — “until the playoffs start,” as our team leader says, a bit ominously. But that’s okay. I play softball because when I do I fly away to that cool, blue place in my mind where the immediate meaning of life — catch the ball, throw the ball, hit the ball — is absolutely clear and no one’s present welfare, future happiness or very existence depends on what I do. The rules are established and enforced; the boundaries are marked in pristine white; the umpire’s decisions, right or wrong, are final; and there is never any doubt about who won.

As Yogi also said, it ain’t over ’til it’s over. And I hope it’s never over.•