Scene Here: Shave and a Haircut at the Friendly Barbershop in West Springfield 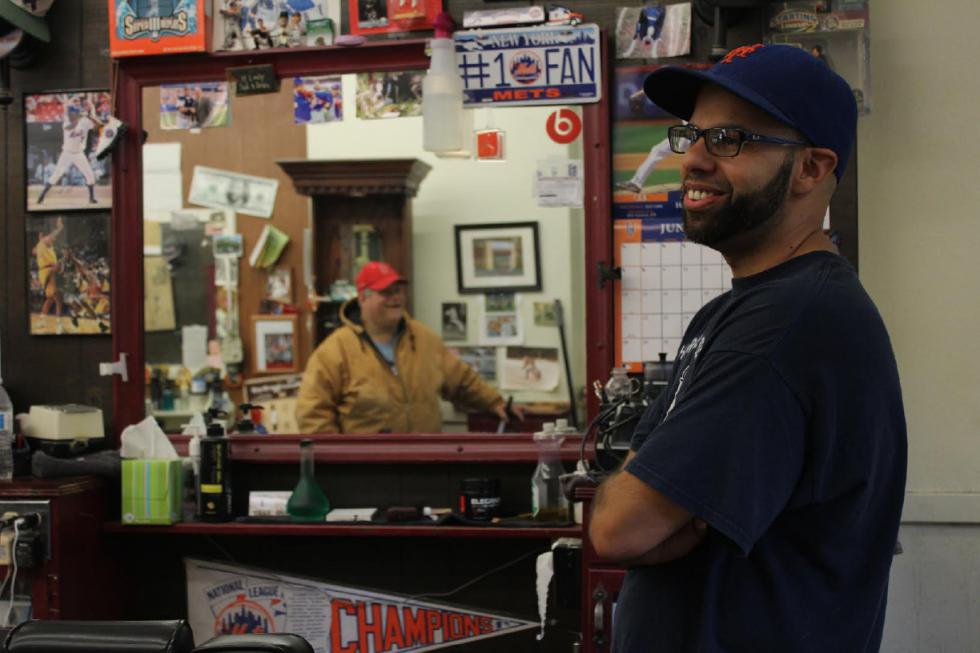 The three men who staff The Friendly Barber Shop in West Springfield — James Pagan, Jeff Vample, and John Pellegrino — don’t care two bits who you are. You can be a Red Sox fan, a Yankees fan, or a Mets fan — and the three jerseys hang side-by-side at the front of the shop as testament — if you need a shave and a haircut, they’re your men.

“I even cut women’s hair,” Vample says with an upturned tone. But ladies in search of long layers and a blowout need not apply. “We don’t do [long-hair] styles,” Pagan says.

After all, this ain’t a salon.

The Friendly Barber Shop is a classic barber shop. Here, you’re in and out for less than $20. A regular haircut costs $13, a cut and a beard trim is $18, and just a trim costs $7. You can even get a classic straight razor shave for $14.

Below the jerseys sits the TV, which usually has the game on, they say, but right now it’s playing something called HQ. The talk show is mostly drowned out by the sound of the rain slamming against the windows. The smell of cologne and aftershave is dizzying. I stupidly lean against a counter and a tuft of someone’s hair attaches itself to me.

Here, the presence of a woman seems rare. Vample, bashful and giggly, asks if I have a boyfriend and vows to name the perpetually dancing hula girl at his station after me.

The walls are full of mementos — photos, sports memorabilia, sketches from customers, and newspaper clippings. An entire wall is devoted to an assortment of badges: police, firefighter, military, Boy Scout, etc.

“A lot of our customers have federal jobs,” Vample says.

He sees my eyes wander to a photo of a young boy in a wheelchair, wearing a Red Sox jersey. “His name was Anthony,” says Vample, looking past me. “He had MS. I used to cut his hair. The last time I got to do that was at the funeral home across the way.”

Andre Cojocaru comes in for a quick cut. Vample gets to work. His hands move quick and effortlessly and Cojocaru’s hair just seems to fall into place. “I love what I do,” Vample says, his impeccably twisted dreadlocks waving while he works.

Barry Cesan, a West Springfield local who lives around the corner, pops in to shoot the breeze. He occupies one of the empty barber chairs, and Pagan occupies the other.

While Vample offers advice for avoiding split ends, Cesan and Pagan banter. Cesan wears a bright red Red Sox cap, while Pagan sports his blue Mets cap. “What you doin’?” Cesan calls over to Pagan, who’s on his cell phone. “Shut up, Barry,” Pagan calls back.

After 10 minutes in the chair, Cojocaru leaves looking sharp. Vample takes the wide barber’s broom to the floor. Cesan sticks his leg out to trip him, but Vample easily steps over his leg and continues sweeping, unfazed. Vample and Pagan both look up at the clock as the long hand rings in 5 p.m.