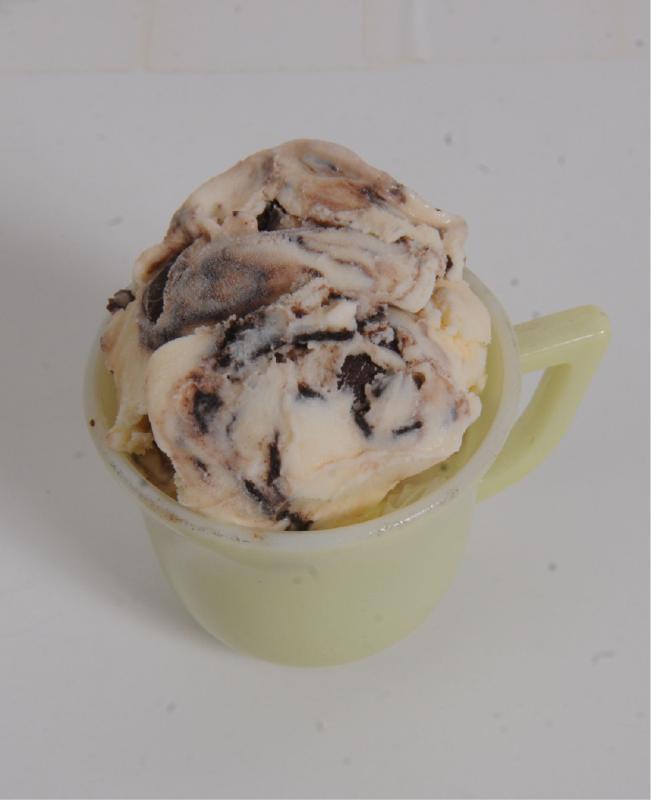 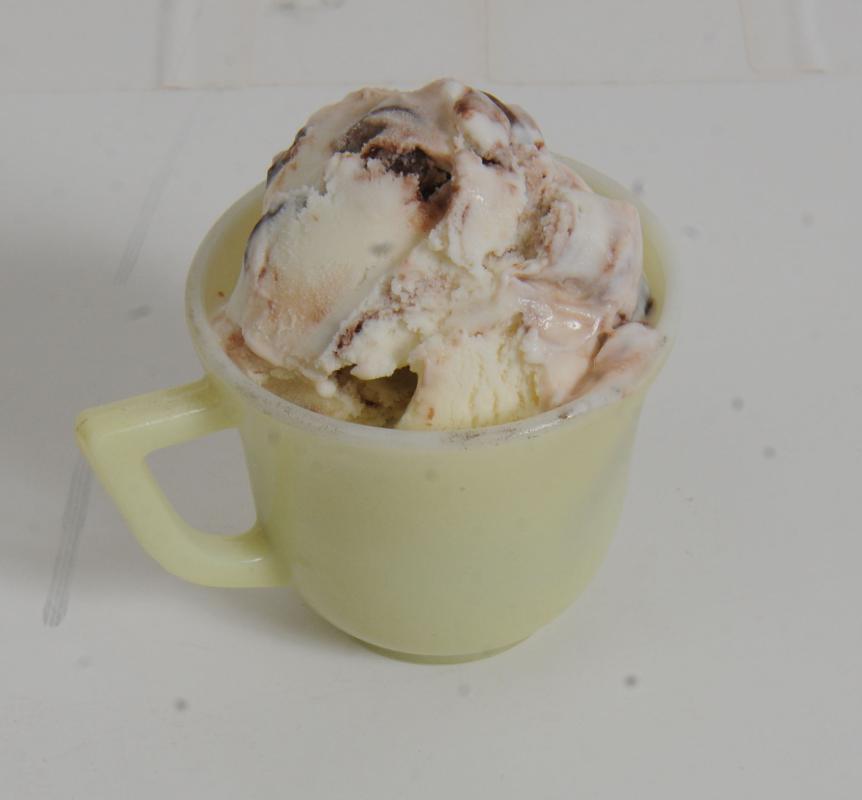 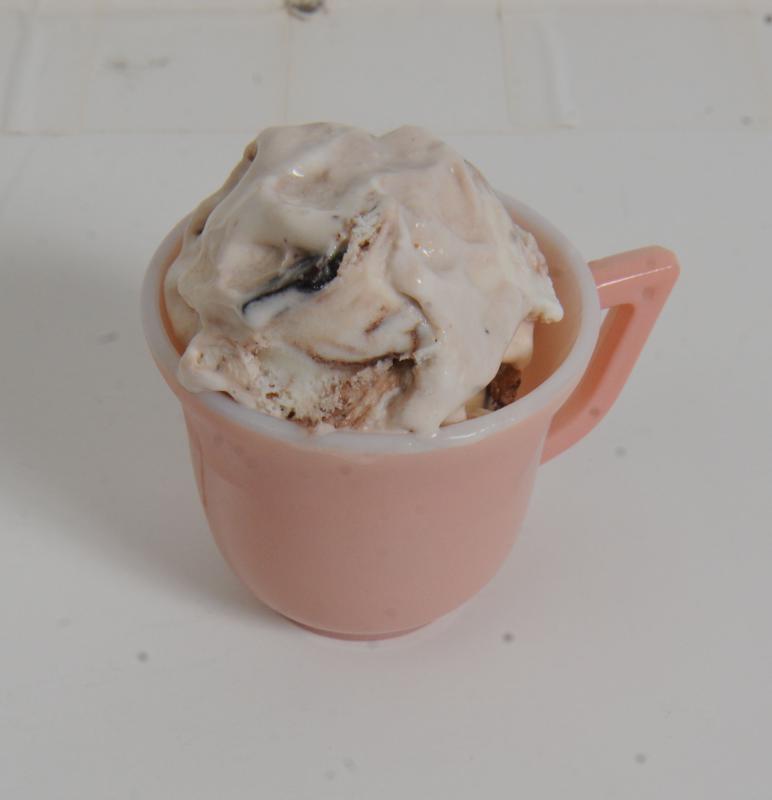 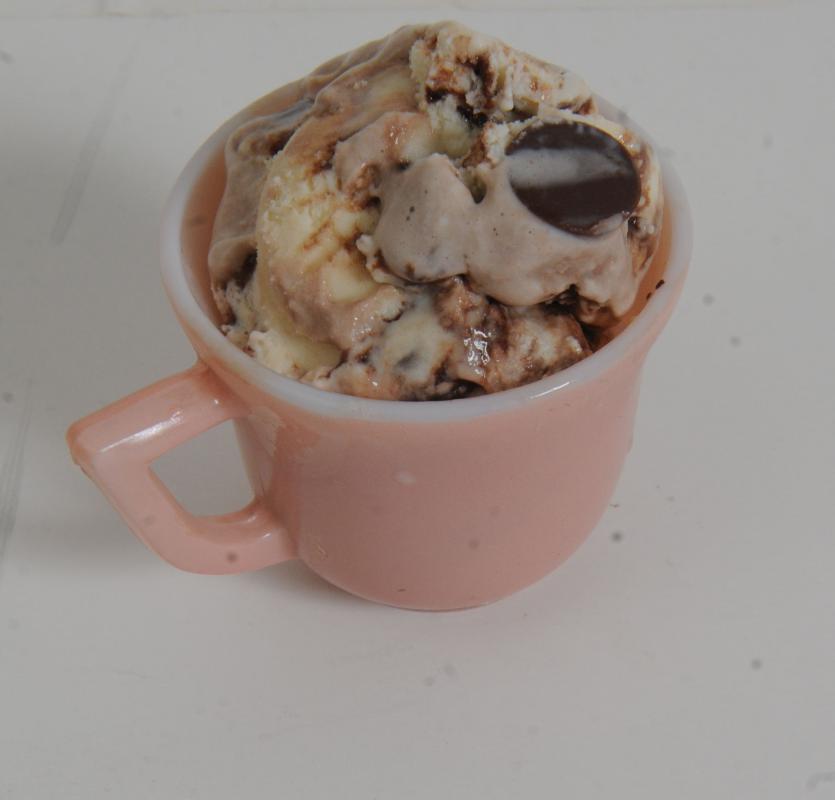 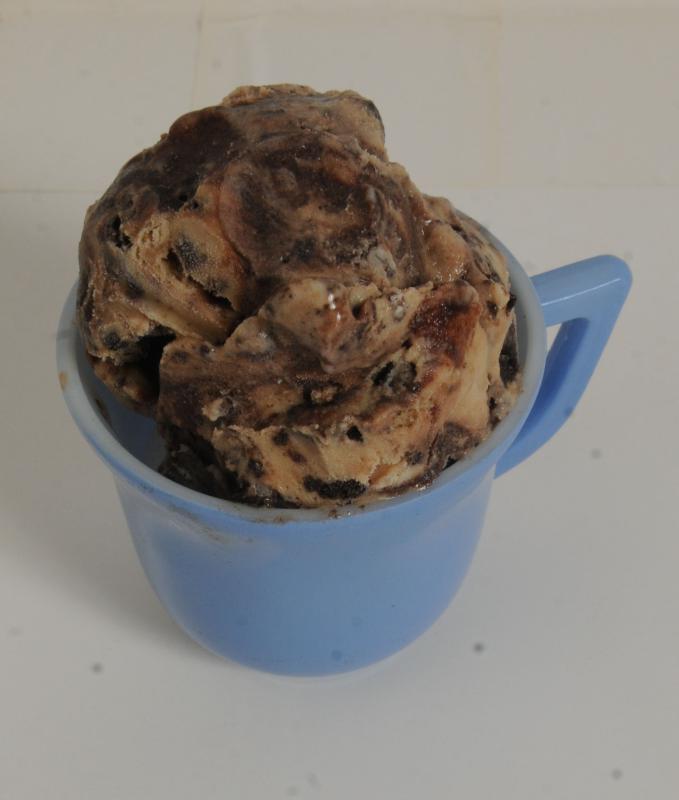 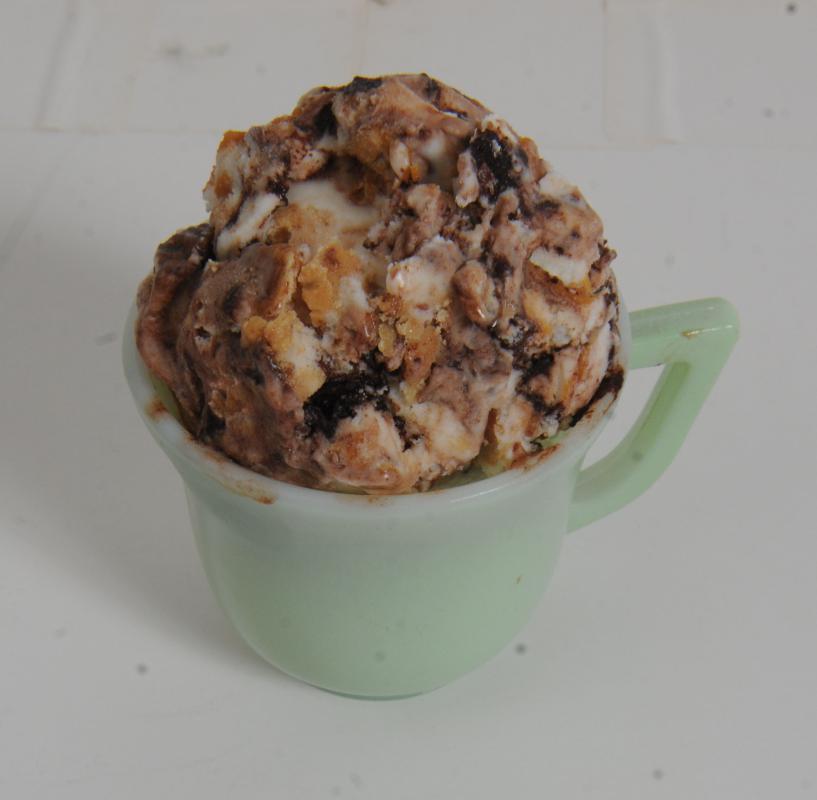 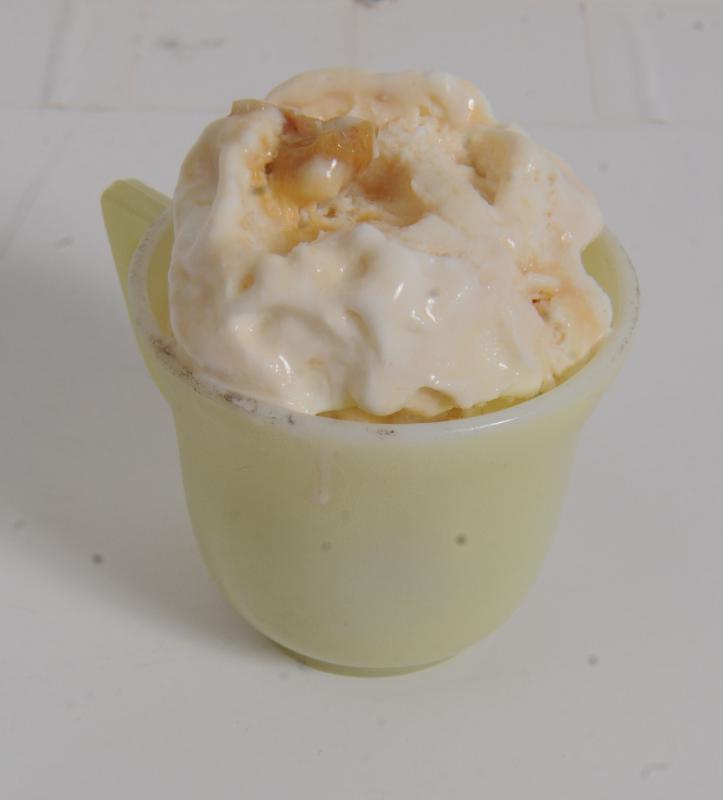 J.B.'s Ice Cream Factory in East Longmeadow, Caramel Cashew got an honorable mention. Advocate staff felt it wasn't right to compare an ice cream with chocolate with one without chocolate. Chocolate always wins. 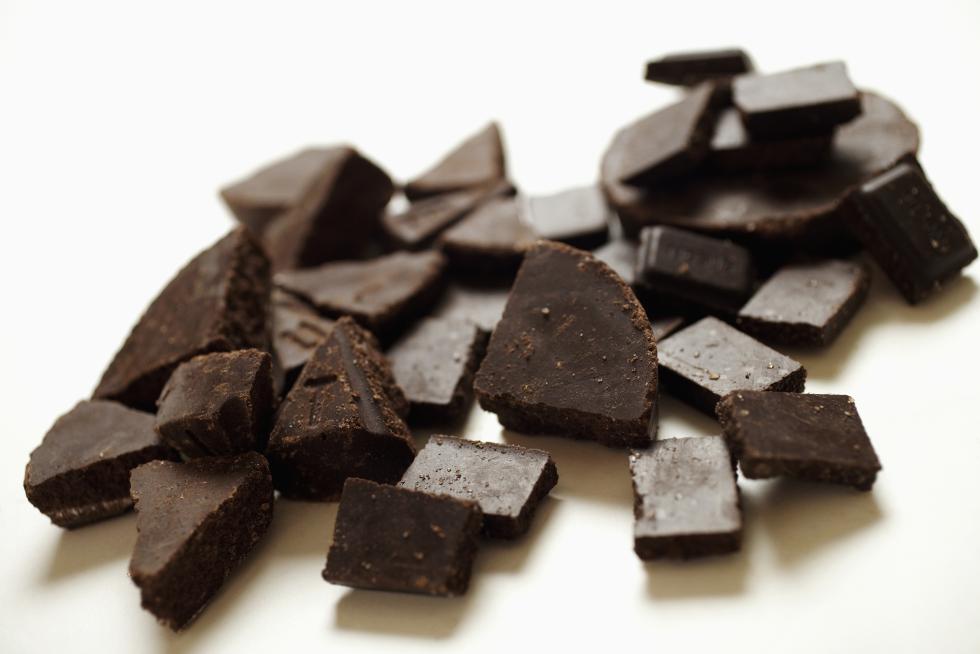 Now that summer is almost here, we’re reaching for one of our favorite ice cream combos to get us through the work week: thick ribbons of fudge and belts of peanut butter cups in sweet vanilla ice cream. We’d call it Moose Tracks, except that name has been owned by the Denali Ice Cream company since the early ’90s. Trademark or no, it’s a winning concoction and many local ice cream makers produce a take on Moose Tracks.

In order to help you make informed scoop selections of your own this summer, we tracked down six local Moose Tracks variations and ranked them in a blind taste test. Really we do this for you. Judges for this installment of the Advocate’s Taste-Off series were staff writers Amanda Drane and Hunter Styles, editors Kristin Palpini and James Heflin, production manager Jen Levesque, and guest judge Stella, Heflin’s 6-year-old daughter. Why a 6-year-old judge? You can always count a kid to keep it real when it comes to ice cream. We rated the treats on a scale of 1 (yuck) to 5 (yum).

Not every ice cream parlor makes a riff on Moose Tracks specifically, so in a few cases we judged their next-closest swirled creation, promising to review those tastes on their own terms.

Stella: This was just vanilla ice cream with some peanut butter cups. The flavor is supposed to be chocolate, too.

Kristin: I don’t know if I got a different scoop from everyone else, but I got a lot of peanut butter cups. That really pumped it up for me.

Amanda: It won some points for me because the cups were awesome, like they made their own peanut butter.

Amanda: The flavor is awesome, the texture is awesome, but I’m not into the combination of mint chocolate and peanut butter.

Kristin: It had a sweet milkiness to it that the others didn’t have. But it needed more stuff in it.

Hunter: Points for richness. This is great vanilla ice cream — hearty and flavorful.

James: I liked everything going on here, even though it wasn’t the same in every bite.

Kristin: Nostalgia boosted this one for me.  It reminded me of going out for ice cream after a softball game. Smooth, creamy, a little buttery.

Jen: The overabundance of peanut butter cups equalled a big smiley face for me. And it had a good thick texture.

James: This wasn’t working too well for me. It didn’t have a fresh, prominent peanut butter flavor.

Hunter: There’s almost no chocolate in it at all, which is a strike against it.

Hunter: The peanut butter is good, but I think the fudge element is only okay. It tastes like Hershey’s syrup. And the vanilla ice cream didn’t stand out. It’s like three people who show up to the same party, but are reluctant to dance.

Jen: I love peanut butter cups, so I love this.

Amanda: The peanut butter cups were certainly the star. The vanilla ice cream was a little on the milky side.

James: A prominent peanut butter flavor, and the chocolate was a nice note, too. Everything got along beautifully and married nicely in this one.

Stella: I can really taste the coffee. The good thing about this ice cream is it’s very chocolatey.

Amanda: I loved it. The brownie chunks were awesome, and the chocolate chips were the perfect texture — nice and soft.

James: This had absolutely everything working, and it wasn’t even over-the-top sweet. I don’t want to find out which brand this is, because I’ll gain 40 pounds over the summer.

Hunter: It tastes like a peanut butter supernova, which won me over. The chocolate element is great — there are little threads of it throughout, but also a few larger pockets of fudginess.

Kristin: I’ll be the contrarian here. I wasn’t too crazy about this one. It was chunktastic, and I appreciated that they piped the peanut butter directly into the ice cream. But the chocolate was too sweet for me, and I missed the vanilla.

Amanda: I barely even tasted the vanilla, there was so much chocolate and peanut butter. They were dancin’ all up on each other. That’s always a good thing.

Stella: This one was soooo … gooood.

Honorable mention: We also tasted a creamy concoction from J.B.’s Ice Cream Factory in East Longmeadow. At the time an editor visited, it was the closest flavor the owner had to Moose Tracks available, so she bought it. But in the end we couldn’t judge J.B.’s cashew-cluster caramel ice cream alongside the local Moose Track variations. It’s not fair to compare something that has chocolate with something that does not — chocolate always wins. Judges were impressed with J.B.’s vanilla bean ice cream-base. It had an excellent fluffy, home-churned quality to it along with a sweet complex flavor. Finding the occasional cashew in the cream was also fun. Could have used some chocolate chunks, though.•