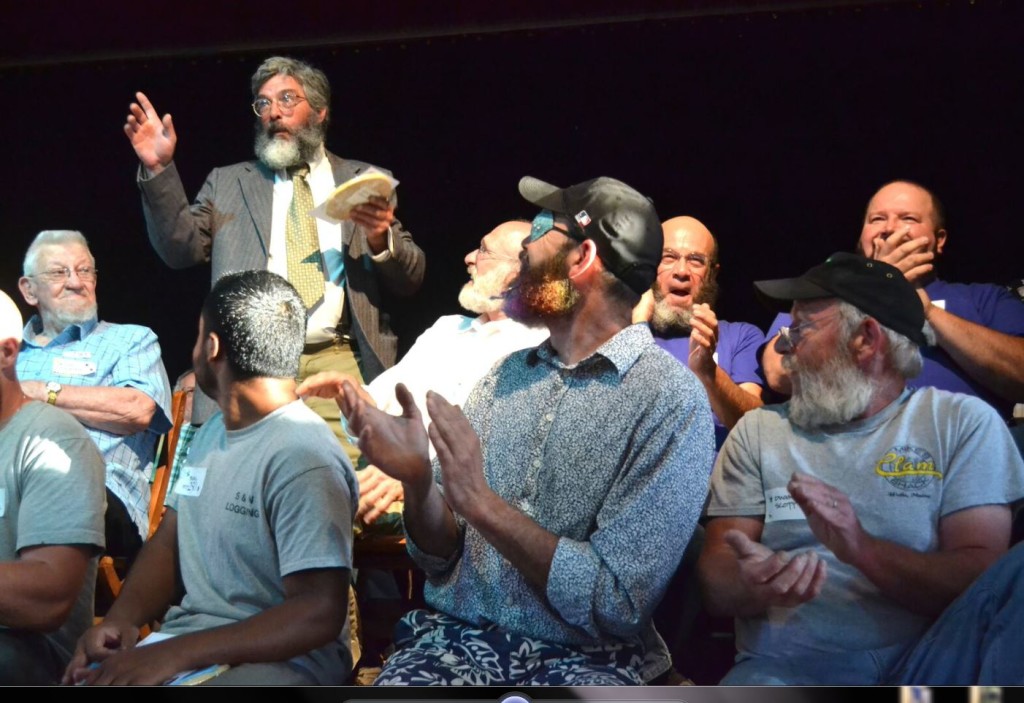 Stage lights shine down on a legion of beards. They sprout from Ashfield men young and old, tall and short. Some beards are just wiry tufts, some fluffy and soft like cumulus clouds, some as thick and full as a field of wheat primed for harvest. The beards are black, brown, red, white, gray. and, in contestant Brian Dickinson’s case, spray-painted in stripes of red, white, and blue.

The beard on Ashfield Select Board member Todd Olanyk is trim and black. He scratches it as he rises from his chair and takes the microphone. “Driving around town, there are a lot of people I don’t recognize these days,” he says. “I’m hoping that after tonight they become more recognizable.”

Olanyk pledged to grow a beard this year, as did the 54 other men onstage. Call it hilltown pride — these are full-on farm folk up in Franklin County. The contest, which is held once every 50 years, began when they shaved clean on Jan. 1. Now, much hairier, they are gathered onstage for the semicentennial beard contest, which begins the town’s 250th anniversary weekend.

Most residents weren’t here in 1965 to witness the last round of beard judging. But the quirky competition still speaks to something deep in this hilltown’s DNA, based on the size of Friday night’s turnout. Several hundred people have packed themselves into the bright, high-ceilinged upper level of the town hall. Most sit in tight rows of wooden folding chairs, and dozens stand in the back. The sun is close to setting, and the stuffy air is shot through with bright bolts of light from the large windows. Kids sit cross-legged in the front row. Seats creak. On a table by the entrance rests a sheet of white paper that reads: “Last-minute contestant sign-in.” After welcomes have been given by Olanyk and other local figureheads, including State Rep. Stephen Kulik and Sen. Benjamin Downing, the six judges — all women — get down to business.

One by one, each man rises from his seat and waves when his name is called. Then, after a brief deliberation in the other room, the judges return with the results. With each award announced, the assembly applauds wildly. When Gus Ganley stands to accept his win for Best Damn Beard Overall, he plucks a long bird feather from the thick nest below his chin and throws it to the crowd, like a rock star tossing out a guitar pick.

Afterward, everyone pours out onto Main Street. Many are headed to the newly-renovated Ashfield Lake House for a cold pint of celebratory beer and a fresh shave, including contestant Kurt Wigmore. “It feels like a wombat attached itself to my face,” he deadpans, pulling on his beard. “I can’t wait to get rid of this thing.”•