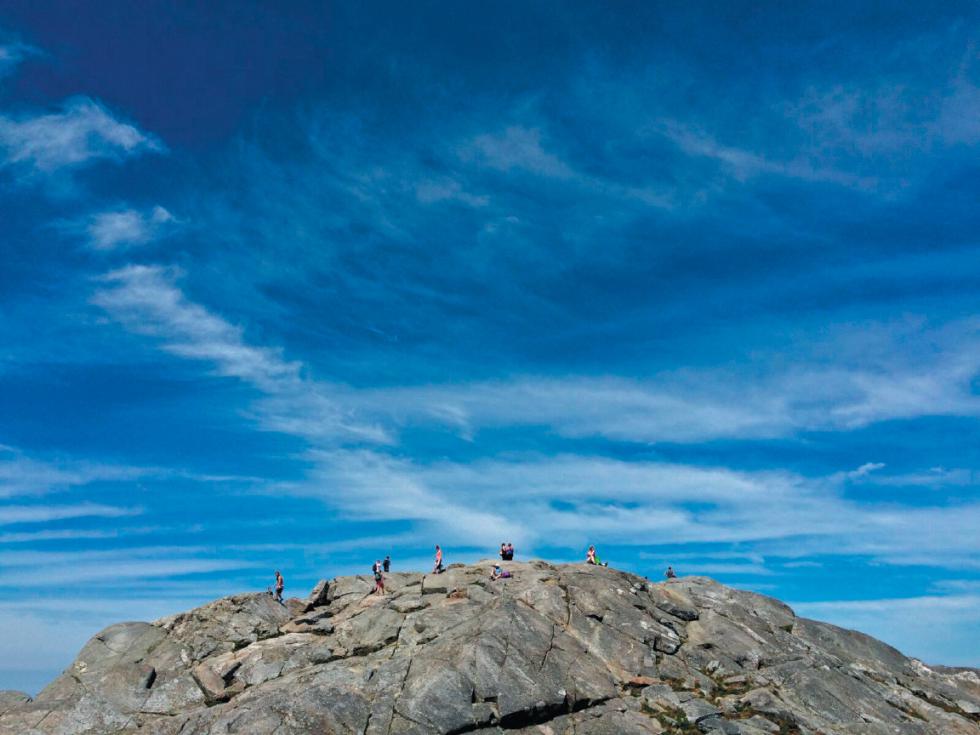 Not everyone would choose to spend a Sunday morning deep in the woods of southern New Hampshire. The scattered hikers on top of Mount Monadnock at 10 a.m. arrive from all directions — the mountain has dozens of trails — in various states of outdoor preparedness.

There are about two dozen people at the summit. Most are wearing shorts, hats, and sturdy shoes, but a few appear to have teleported up the mountain from a couch or the mall. A young woman in flats sits on a ledge and swats the mosquitoes biting the tops of her feet. A large man in sweatpants is lying down on his back and breathes heavily for 10 minutes, making triumphant “Whooo!” noises.

Sit here for an hour, and the sweat-soaked cast of characters changes.

Two young guys sit at the edge of a cliff, looking down onto the town of Jaffrey and munching sandwiches. They look up and watch a small plane flying far overhead. Aside from the occasional strong breeze, the mountaintop is quiet, and it’s easy to hear the tinny hum of each passing aircraft.

“Dude,” one says. His Boston accent is thick. “This is gonna make kicking back, drinking some beers, and watching the game all worth it.” Most visitors are drinking water, snacking, and chatting. A few are staring at their smartphones.

“I made it!” yells a five-year-old boy in shorts, just arriving. “Ah, finally, a breeze!” He collapses on a cool ledge. Then he rolls over and notices the names carved into the rock. “Oh, come look!” he calls to his father, pointing at the ground. Some are recent, shallow scratchings, but a few names are set much deeper, like etchings on a tombstone. They are of old American surnames, like “Wheeler” and “Ives.” One chiseled carving reads: “Grant — 1808.”

A shirtless man in surfer shorts notices that his backpack has given him strange tan lines. “Dude, yo,” he says to his friend, displaying a shoulder. “What’s the SPF on this shit?”

A few yards off, two dads, each with a family in tow, run into each other. “Mike!” one says. “Why am I not surprised to see you up here? Did you come up the White Dot trail?” “No man,” says the other. “I like the Dublin Trail. I’m old and fat now, so I take that one.”

Two gray-haired couples walk past. “Last time I was up here, it was 32 degrees,” says one of the men. “We got up here, and the wind was blowing sideways. But you could see Boston clear as day.”

Eventually I pack up and head back down toward the tree line. On my descent, scrabbling down steep slopes of rock, I pass hikers on the way up. A sun-tanned couple is holding hands, and she lets go of his to jog up the trail a ways.

“Is it much farther?” he wheezes.

She turns back to him. “Why? Aren’t you having fun yet?”•