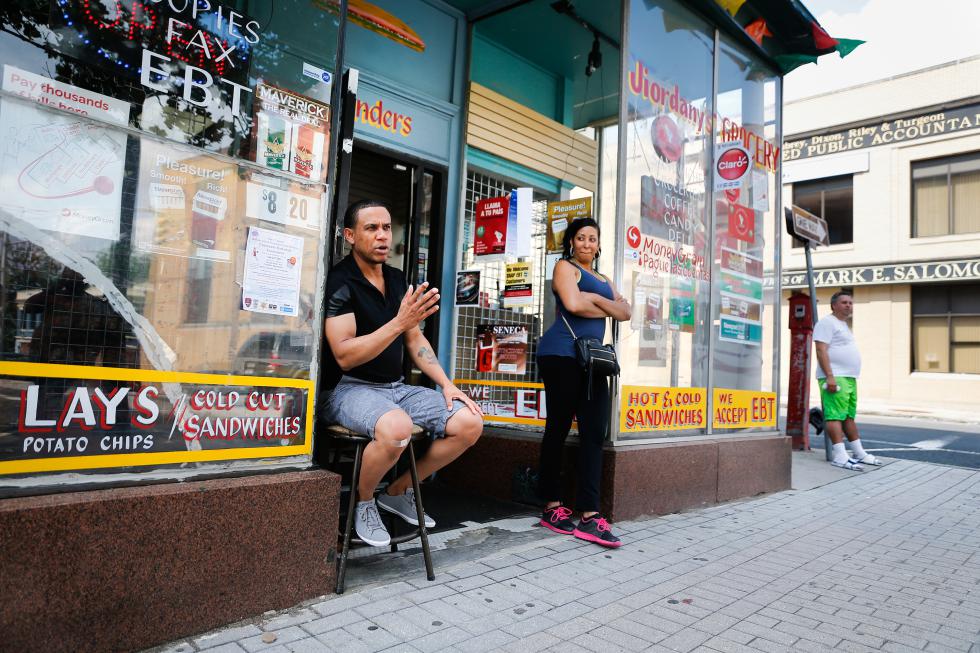 A thin man in a red basketball jersey and nylon shorts strides down Dwight Street in Holyoke, arms swinging, a smile on his face. His thick black hair is slicked back, and his ankles look like saplings sprouting from his foam slippers.

He reaches the intersection with High Street, throws open his arms, and lets out a loud, satisfied sigh. He puts his hands on his hips, surveys left and right, then dunks his hands in his pockets and pulls out a cigarette. He’s ready to light it when out of the corner of his eye he sees someone familiar.

“Hey Papi,” he bellows, shaking the man’s hand while pulling him in close for a shoulder-to-shoulder hug replete with back pat. The two exchange a few words and Papi moves on.

Alone again, the man searches left and right, left and right. This time, it’s a red car that triggers him. With the same gregarious voice, he goes over to the car and leans in the window. He exchanges a fist bump with the driver, and they conversate while cars lazily maneuver to avoid a collision.

All around High Street life is moving at a similar pace. On the sidewalk men zip by on tiny bicycles. Fathers push strollers, and children race to the nearest corners. Women in scrubs walk two-by-two, gossiping about work.

Lined with old retail shops and office buildings, High Street is awash in ornate art deco edifices scabbed over with paint flakes, deteriorating underneath patches of particle board and city grates. It’s a nice break from the big box haven in which I reside. Along High Street, from Essex to Lyman, are five or more clothing boutiques, several home furnishings stores, maybe half a dozen Spanish-speaking churches, a mini mart every 30 feet, and bars and restaurants: Jizay’s Global Tech clothing store, Bodega 24, Holyoke Oasis, Discount Furniture, Kennedy Fried Chicken, Sonido Musical, City Shoes Plus, to name a few.

But many storefronts are closed. Only the signs remain: The Warsaw, Sundial Shoes, The Republican satellite office, Team Rehab and Wellness. One particularly depressing storefront window features a white board with the words “Historic Holyoke.” The only other thing in the window is a tiny purple glass vase with a long-dead office plant lying yellow on the floor.

A small crowd stands outside Betty Groceries. Two guys in caps, long shorts and thick beaded necklaces are talking about their customers. A trio is smoking pot. A beefy black LR3 pulls up to the sidewalk blaring reggaeton. A gray-haired woman missing her two front teeth and wearing a striped housecoat leaves her stoop and walks over to the Land Rover. She talks with the driver for five minutes, smiling and laughing, before the car moves on.

The music on the street abruptly changes as a white sedan pumps an operatic melody out of what sound like tin cans. The tune goes flat the farther he drives away, and it’s a relief to have the noise replaced by the exuberant Puerto Rican music that Sonido is playing outside its store. From Bodega 24 you can hear a man singing in Spanish along to a folk tune.•