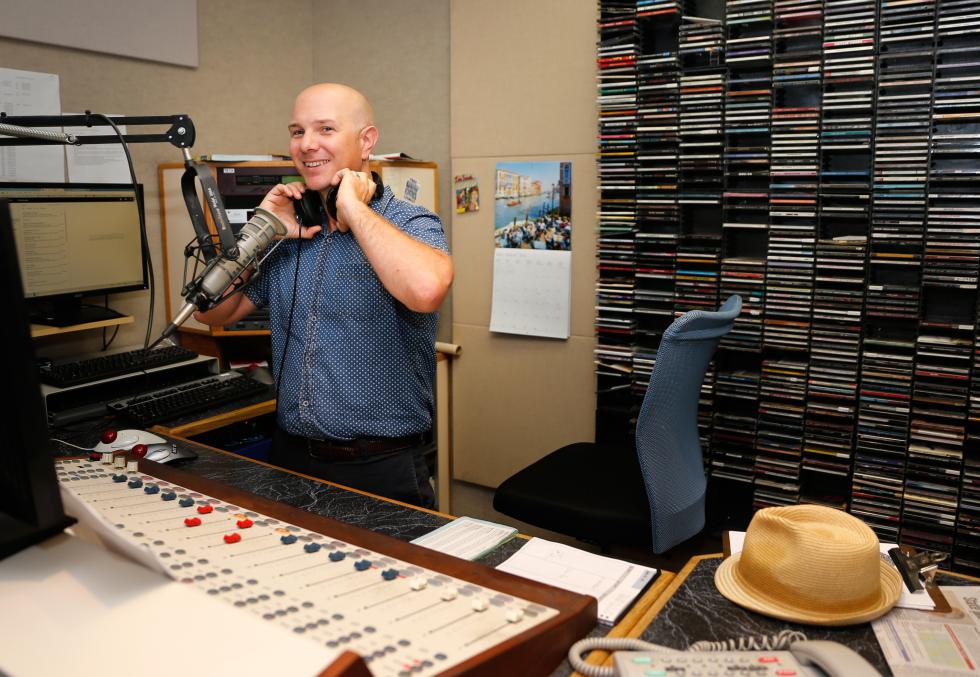 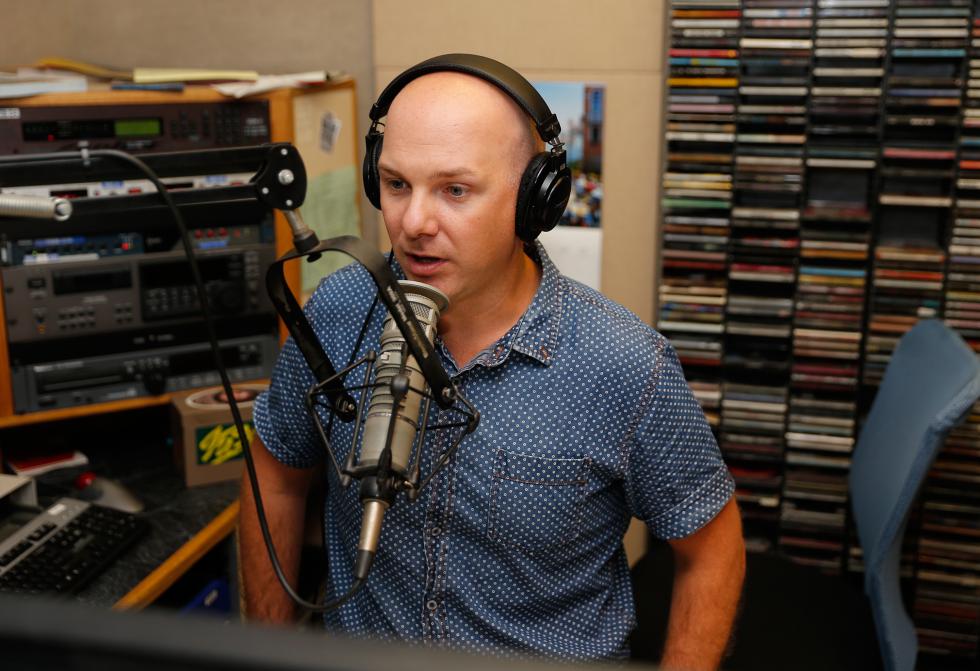 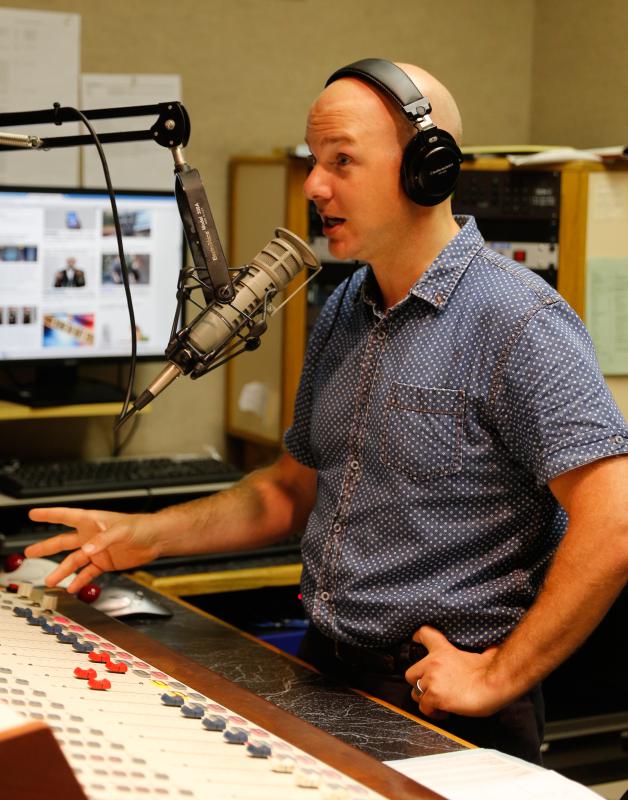 Julia Child said it best: people who love to eat are always the best people. That’s the springboard for our new occasional series @lunch, in which we sit down for a quick and candid midday meal with interesting locals, ready to chew the fat.

For our inaugural lunch we sought out one of the Valley’s most voracious culture vultures: Northampton radio host Monte Belmonte, whose daily morning show on 93.9 The River blends music with news, interviews, and freewheeling social commentary. He is also the program director for The River (WHMP), and Hits 94.3.

The summer sun has been nice to Belmonte. He showed up for our sandwich date at The Haymarket on Main Street in Northampton tanned and grinning, wearing rolled sleeves, sunglasses, and a straw fedora. A sartorial celebration of our warming relations with Cuba, perhaps?

We didn’t get into that, although our conversation coasted smoothly from national politics to local news, personal musings, and back again. What is clear from that hour-long gabfest is that Belmonte, quick to the quip and the occasional loud giggle, has fun floating any topic, any time. Sure, that’s what he gets paid for. But even when he’s off the air and lets his hair down — we’re talking figuratively, here — his cheeky energy is contagious.

Good thing, too, because he has a lot of pots on the stove. In addition to his work at the station, he is teaming up with some local arts players to take over operation of the Shea Theater in Turners Falls.

When asked whether he can keep firing on all cylinders with so much going on, he was cautiously optimistic. “I just had to do it,” he said, referring to his newfound role as arts steward. “I live in Turners, and the Shea is a little downtown gem. Hopefully many hands will make light work. That’s what I keep telling my wife.”

There have been some big headlines lately, from the Charleston shooting to the Supreme Court’s ruling on marriage equality. How do you balance being silly and serious as a host?

I think and talk a lot about news issues, but I don’t try to mine them for comedy. I’m not a comedian — I’m just a sex and fart jokes guy. But when Charleston happened, there was nothing funny to be said. I played Marvin Gaye on the air as an expression of what I was feeling.

Or, remember the Eric Garner case, when the grand jury indictment didn’t come down? I played three hours of righteous indignation music, and people called in to request stuff. That’s how I deal with it.

I love comedy, though. I pay a lot of attention to what great comedians to. John Stewart, Stephen Colbert, Key & Peele, Amy Schumer — that’s pretty much my Mount Rushmore for comedy in 2015.

Do you have role models from the world of radio?

I grew up on Howard Stern. Whatever people think of him, he revolutionized radio, and he’s one of the best interviewers that ever lived. Ira Glass, and some of the newer shows like Radiolab. Most of them are on NPR. I love what national radio does.

But you know who my spirit guide is? Mister Rogers. He has a neighborhood and shit. He talks about bullying and sadness and feelings, but he doesn’t have to talk specifically about, like, the rape cases at UMass. I love interviewing people, but I could never be a talk-show host straight up. I don’t need to go into everything in depth.

You want to reflect what your listeners are feeling.

Right. When the equal marriage news came down, I played music with a sense of celebration. I felt that, and I think the community felt it too. When Obama was elected I practiced reading the phrase “our first black president” half a dozen times, but I still got choked up. I cry on-air a lot. It’s really unprofessional.

When I was just starting to work behind the scenes at The River, Rachel Maddow was hosting, and she read the state’s court ruling on gay marriage on the air. That was 2003. I remember how powerful that was.

So with the Supreme Court ruling, I felt the need to go on the air and read the decision. It had come full circle for me. Then I emailed Rachel later that day and told her how touched I was by this memory. She was the first gay person I really got to know, and she changed everything I’d been taught about gay people.

You grew up in Eastern Mass, right?

Just south of Boston. Pretty conservative out there. I was getting in a lot of trouble and playing in a band. I got to know a youth pastor at a Baptist church who was also a guitar teacher. So when I got in trouble one time — I got arrested for stealing golf carts — I thought Jesus was intervening. I became a born-again Christian at age 15 and decided to be a missionary.

I went to a Christian college on the North Shore, and I went to India over my Christmas break. I met Mother Teresa and worked in the homes she set up in Calcutta. By junior year, though, I wasn’t feeling the Theology thing, so I added a major in Interpersonal Communications.

Man, who even knows?

But Western Mass was a better fit for you.

I mean, in 1996 I was going to vote for Bob Dole. By 2000 I was driving around putting up Ralph Nader posters.

You found your inner activist.

Yeah. I just read The Bully Pulpit, this great book by Doris Kearns Goodwin. It’s about Roosevelt, Taft, and the golden age of journalism. People like Sam McClure, Ida Tarbell, they would go out and report one story for a fucking year. Then they’d come back and, like, destroy Standard Oil. There’s activism in that.

I feel like now, journalists get told, “Just the facts, man.” We’re discouraged from interpreting the facts and taking a stance against corruption. But that’s what journalism did in the early 20th century, and it changed the whole country. There’s nothing inherently unfair about taking a position.

There’s that Mark Twain quote: “I didn’t have time to write a short letter, so I wrote a long one instead.” I think about that. I’m like a sketch artist on the air. But if I had more time I would love to spend it on each piece, each interview, and really refine it, NPR-style. At the moment I’m more like NPR on speed.

Do you think your morning show would work anywhere else? Or is it really a product of the culture here, made by and for the Valley?

I’ve been doing the show for almost 10 years. I know it won’t last forever, but whenever I leave, I want to know that I did the exact show I wanted to do. That’s how I feel right now.

There’s a quote from this book called You’re Lucky You’re Funny, which was written by the showrunner for Everybody Loves Raymond. He said do the kind of show you want to do, because you’re going to get cancelled anyway. So I have an astronomy segment. I talk about wine, sometimes at length. I have a segment with a fucking dictionary editor.

None of that should work. But so what?•