Scene Here: ‘Yo, My Belly Button is a Pool’ – Midnight Ultimate at Wal-Mart 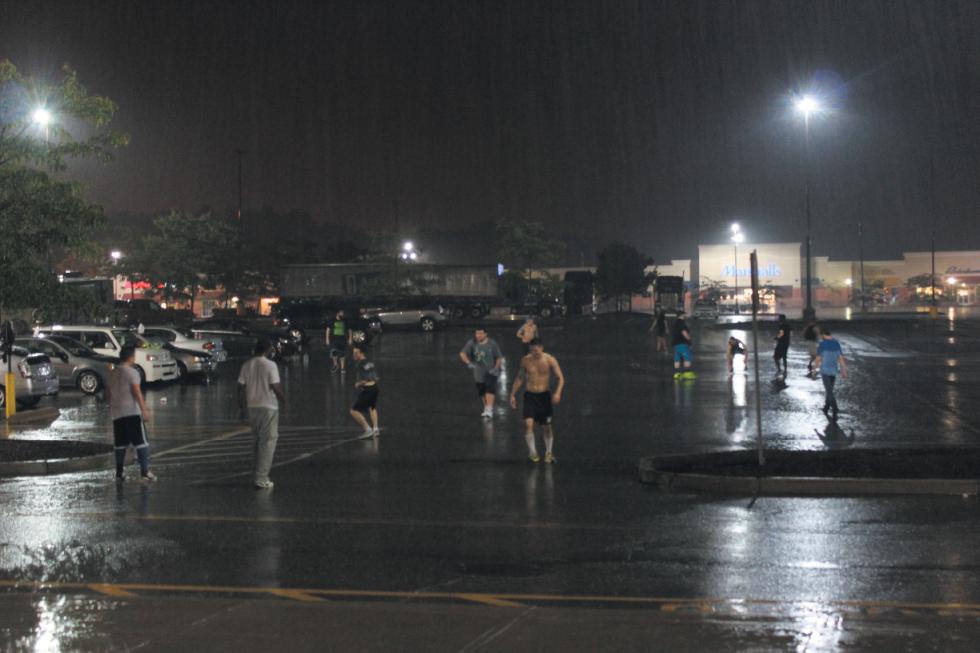 I was confident I would find no Ultimate Frisbee going on as I drove into the Wal-Mart plaza in Chicopee shortly after midnight early last Friday — I figured the pouring rain and flood warnings would deter the pick-up players that valleyultimate.org told me gather there every Thursday night at midnight.

But sure enough, there they were, splashing around in the wet, running from one end of the parking lot to the next, chasing after the whirring white discus.

“Yo, my belly button is a pool,” yells one shirtless player as I approach. As the rain sops my hair and spills over onto my eyelashes, I know exactly what he means.

The group of men is 15-strong, four of whom are shirtless. The neon Marshalls sign presides over their play, the many street lamps helping to light their way. The rain is warm, at least, and there is a metallic smell in the air. The splat of the sneakers in the puddle that the parking lot has become sets the baseline for the chorus of grunts, expletives, and “hey, hey, heys,” as they dart from one end of their paved field to the next.

The orange glow from the streetlights along the outer rim of the plaza reflects off the raindrops, casting a sunset-like hue. A speedy, white-toed mutt dashes into the game from out of nowhere, handily outrunning the players in its attempts to catch the flying object.

They’re having fun, but these guys are serious about their Frisbee — no one here likes to lose. As the Frisbee flutters overhead in the direction of the storefront, one of the shirtless players goes for a dive, his whole front sliding along the sidewalk like it’s a slip and slide. Seemingly unscathed, he rises victorious. At this point, the end of their concrete playing field closest the storefront has become a calf-deep pond. The same diving player lays down in the deepest part of it and does an alternate arm stroke.

The players stumble through the parking lot turned pond for a couple more minutes before surrendering to the weather. It’s 1:30 a.m.

“When your shoes get water logged, it’s not safe anymore,” says Pat “Doofy” Feeley, lifting up his sneakered foot to reveal water pouring out of it.

Feeley, 29, says he and a couple of guys started the Thursday night midnight pick-up games nearly 10 years ago. He says they were working second shift at the time and would get out of work too amped to sleep and in need of something fun to do. At that time of night, he says, the only well-lit option was the big, open parking lot.

They no longer work the second shift, he says, and the midnight start time can sometimes be a challenge. “But at this point,” he says, “It’s tradition.”•