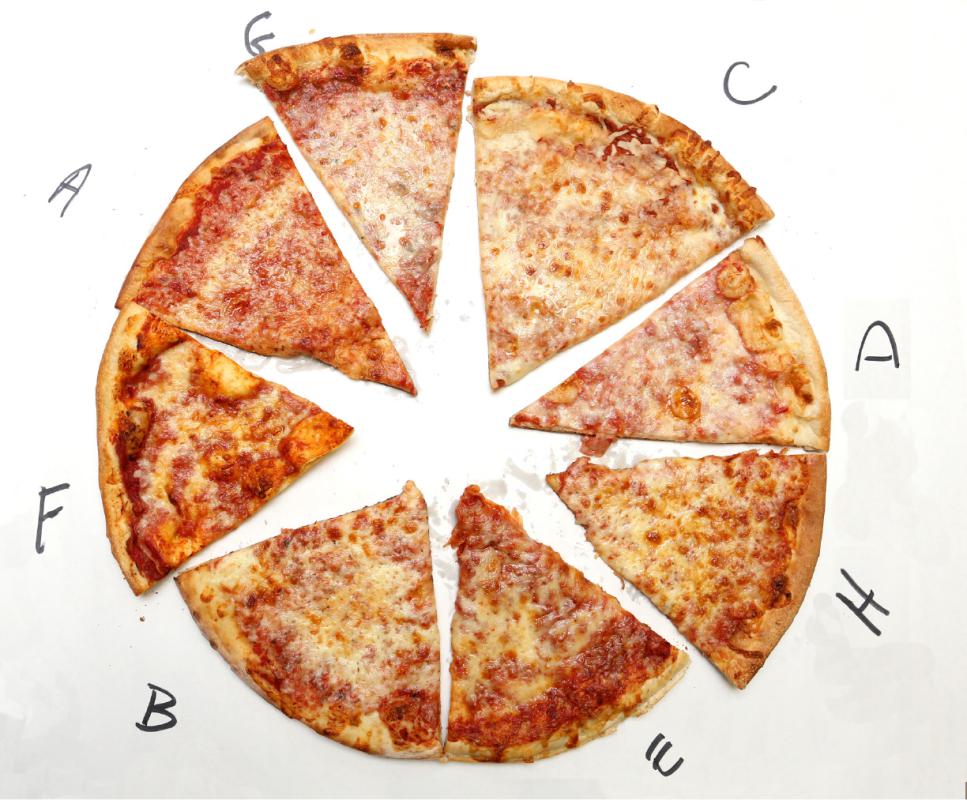 It’s round three in our all-Valley pizza slice smackdown. This month we tasted pies from the northern half of the Valley, grabbing slices of cheese from Amherst House of Pizza, Sibie’s, and Sub and Pizza, all of Amherst; Antonio’s and Papa George’s, both of Easthampton; Hillside and Primo Pizzeria, both of Deerfield; Frontier Pizza in Sunderland; and Roberto’s in Greenfield. Advocate staff chose to review cheese slices because if you can’t get a pie with “nuthin’ good on it” right, then get out of the kitchen.

Taste-offs are judged blind on a scale of 1 (yuck) to 5 (yum). This month, judges were editors Kristin Palpini and James Heflin, reporter Hunter Styles, Web director Micky Bedell, and head of IT Daryl Brosseau. Winners of the previous rounds were Pinocchio’s, which won the Northampton contest, and Primo’s of Springfield, which took first place in, you guessed it, the Springfield slice-off. There is one more round left in the competition, pitting the best pies in the southern half of the Valley against each other, before the grand finale in which all winners will go head to head in a blind taste-test to win the title of best damn slice in the Valley.

Kristin: It was overcooked and burnt, which I usually like, but not this time. It tasted like someone had pulled apart string cheese and put it on top.

James: There’s a lot of cornmeal crunch at the bottom and it’s greasy in a good way, but it was also somehow dry and salty.

Hunter: I kind of like burnt crust, I like a little carbon on the bottom, but it does lack sauce.

James: You need some of that fancy NASA technology to detect the sauce.

Hunter: It’s a whole bunch of chew and cheese and that’s not particularly good.

Micky: This was a vampire pizza it was so pale. But there’s no sauce, so that means it’s bad at its job.

Micky: This kind of reminded me of bagel pizzas and I like bagel pizzas, so this was good for me.

Daryl: I literally LOL’d at this pizza. The green from the herbs under the pale cheese. It’s just not appealing.

James: This is middle of the road. A serviceable pizza.

Kristin: It’s all herbs and undercooked crust. You can see the raw dough. I’m angry.

Hunter: We’re in the bread zone with this pizza. Oppressive bread.

Kristin: To me this was like a gourmet open-face grilled cheese sandwich. Very bready and fresh. They definitely made this crust today.

James: Not very saucy, but there was a breadiness and smokiness that was nice.

Daryl: It was like a breadstick with cheese and the cheese was a little strange.

Daryl: It could have been cooked longer. It was decent, though.

James: I didn’t expect a lot from this one. It looked kind of cattywampus, but it’s great. It’s soft and chewy, a nice crust, a lot of tomato flavor, a yeasty flavor in the crust.

Kristin: I could throw down on this pizza.

Kristin: There’s a nice wine flavor going on and the sauce is tomato-sweet not sugar-sweet. I was taking bites of this pizza before swallowing what I was already chewing on, so yeah, I thought it was good.

Micky: It took me a second to bite into it. I was distracted by how shiny it was. It’s tangy with a buttery crust. I’m a fan.

Hunter: The Hope Diamond of pizza.

Daryl: I mostly tasted crust and there’s this strange aftertaste I can’t identify.

James: There is something strange going on with the cheese. Kind of jarring.

Kristin: It’s saucy, so saucy it dripped on my notebook. The crust looks inviting, but isn’t, like a lemon meringue pie — who needs that?

Daryl: It was just okay, but I did eat the entire slice. It reminds me of supermarket pizza.

Hunter: This is the platonic, ideal, but generic pizza. There is nothing wrong with this pizza, but it’s uninteresting.

James: The sauce was the central star. It’s bright and tangy. This is a sauce fan’s pizza.

James: I think there was Cheddar in this mix. You get a blast of cheese flavor and everything else is in just a supporting role.

Hunter: There is great value in this cheese. It’s punchy.

Kristin: Salt-ay, a firm crispness, a little sweet. Me and this pizza, we can be friends.•